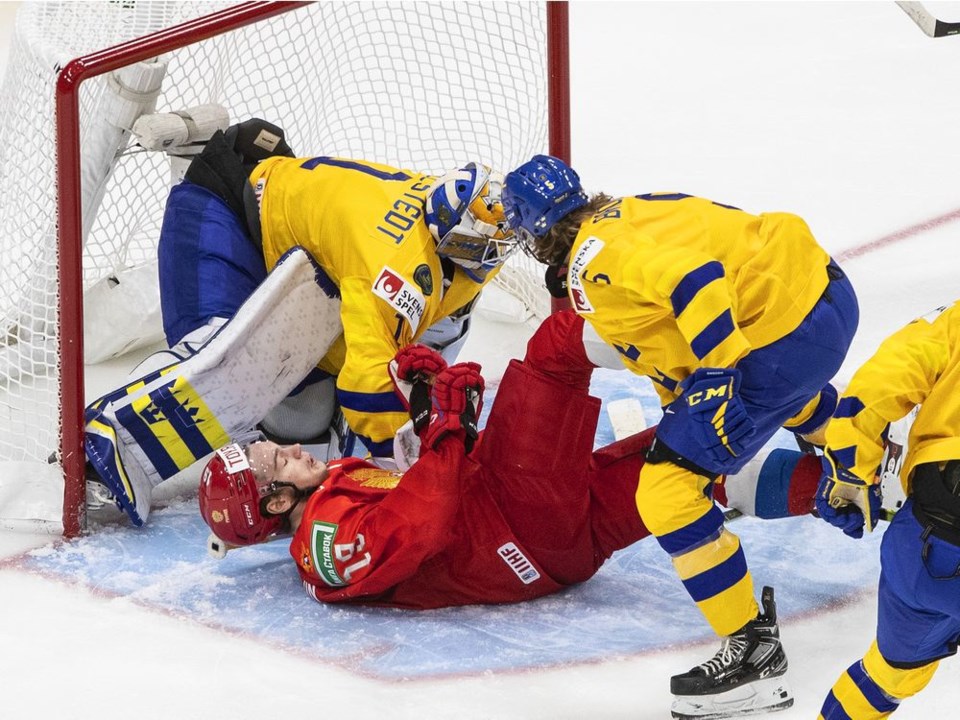 Vasily Podkolzin crashes to the ice after driving to the Swedish net for Team Russia at the 2021 World Junior Championships.Jason Franson / CP

It was a marquee match-up between two perennial powerhouses at the World Junior Championship and it delivered the best game of the tournament so far.

Russia and Sweden, the two top teams in Group B at this year's World Juniors, clashed on Wednesday night in Edmonton and it was a thrill ride throughout. And two Canucks prospects took centre stage in the battle: Vasily Podkolzin for Russia and Arvid Costmar for Sweden.

Podkolzin made his presence known less than a minute into the game, driving around top Edmonton Oilers prospect Philip Broberg to crash the Swedish crease. He was stopped, but Rodion Amirov finished off the rebound, only to see the goal called off because Podkolzin's stick pushed goaltender Jesper Wallstedt off his line. It was a sign of things to come for Podkolzin, who drove the net more often than Vanessa Carlton drives her piano downtown.

When Russia finally opened the scoring, however, Podkolzin wasn't involved. Arseni Gritsyuk got gritty on the forecheck, freeing the puck up for Mikhail Abramov, who made a backdoor pass to Yegor Afanasiev for the finish. And when a Canucks prospect got on the scoresheet, it wasn't Podkolzin.

Costmar tied the game with five minutes left in the first period, taking advantage of a lapse in coverage in front of the net. He snuck in front and when Noel Gunler flipped the puck to the crease, Costmar swatted it past Russian goaltender Yaroslav Askarov on the backhand before it could even bounce twice on the ice.

The goal was Costmar's second of the tournament and he was all around the net all game. Already a staple on Sweden's penalty kill, Costmar got some ice time on the second power play unit as well, playing in the bumper spot in the middle. He finished the game with 4 shots on goal in 19:17 of ice time, fifth among Swedish forwards.

Podkolzin wouldn't be denied. He drew a penalty with a powerful drive through the neutral zone and on the subsequent power play he made a heads-up pass to Amirov for a wide-open net.

As much as Podkolzin initially drew attention in his draft year for the incredible goals he scored at the Hlinka Gretzky Cup, the subsequent years, and particularly this tournament, have demonstrated just how adept a playmaker he can be. He has fantastic vision, able to pick up players at the back door and cross-ice through layers of opposing players and teammates. It's often been frustrating how his teammates have been unable to finish on some of his feeds, but Amirov at least made no mistake on that first period chance.

That's not to say that Podkolzin didn't create chances for himself as well. He and Amirov tied with a team-high 7 shots on goal, while Podkolzin led all Russian forwards with 21:23 in ice time, playing in all situations. He was the first man out on the penalty kill and played net-front or in the bumper slot on the first power play unit.

That gave Russia a 2-1 lead heading into the second period, but Sweden kept pushing back, with Alexander Holtz banking a puck in off Askarov's skate from below the goal line to tie the game. Then Russia retook the lead early in the third period on a perfectly-placed shot by defenceman Kirill Kirsanov on the power play. Kirsanov, a prospect eligible for the 2021 NHL Entry Draft, led Russia with 26:51 in ice time, a stunning sight for an 18-year-old Russian defenceman, but Igor Larionov is not like Russia's previous World Junior coaches.

Through it all, Costmar was a constant presence. The Swedish centre, who wears number 14, showed his agitating side, getting under the skin of Podkolzin in the first period, then baiting Abramov into a penalty late in the second period. In the third period, he had two of Sweden's best chances to tie the game, again finding open space in front of the net, but Askarov stopped one attempt and his second rang off the crossbar.

A goal-scoring agitator who wears number 14? I'm told Canucks fans are quite fond of that type of player. Sure, Costmar isn't the prettiest skater, but neither was Alex Burrows.

Of course, Costmar isn't Burrows, but there's a hint of his agitation and willingness to go to the front of the net in Costmar's game. That's why the World Juniors can be so valuable for fans that might not see prospects playing otherwise. Instead of just seeing point totals or hearing a scouting report, fans can see for themselves how a prospect plays; in Costmar's case, the sandpaper elements to his game should certainly elevate opinions of his place in the prospect pool.

Costmar's crossbar wasn't as close as Sweden would come. With a minute left and the goaltender pulled for the extra attacker, Sweden tied the game on a shot that banked in off Gunler's shin.

That sent the game to overtime, where Costmar made his mark on the game in a negative fashion. After Costmar got the better of him in the second period, Abramov got his revenge, driving past the Swede into the offensive zone and drawing a holding penalty. To be fair, it was a soft penalty, as Costmar never truly put the grab on Abramov and did his best to impede the Russian winger legally, but his inability to match Abramov's pace gave the officials a chance to call the penalty.

On the power play, Podkolzin cut off the Swedish defenceman along the boards to prevent a clearance, forcing a turnover to defenceman Semyon Chistyakov. He fed it across to Amirov for a shot on goal and Marat Khusnutdinov finished off the rebound for the overtime game-winner.

Podkolzin didn't get a point on the play, but it was just one on a long list of little things he did throughout the game that made his linemates better. He created a number of turnovers with his pressure along the boards, good stick in the neutral zone, and hockey sense to know just where to go to pick off a pass.

Vasily Podkolzin's 3-point first period carries Russia over Austria, but what is World Junior production worth?
Dec 30, 2020 11:41 AM