Vasily Podkolzin's 3-point first period carries Russia over Austria, but what is World Junior production worth? 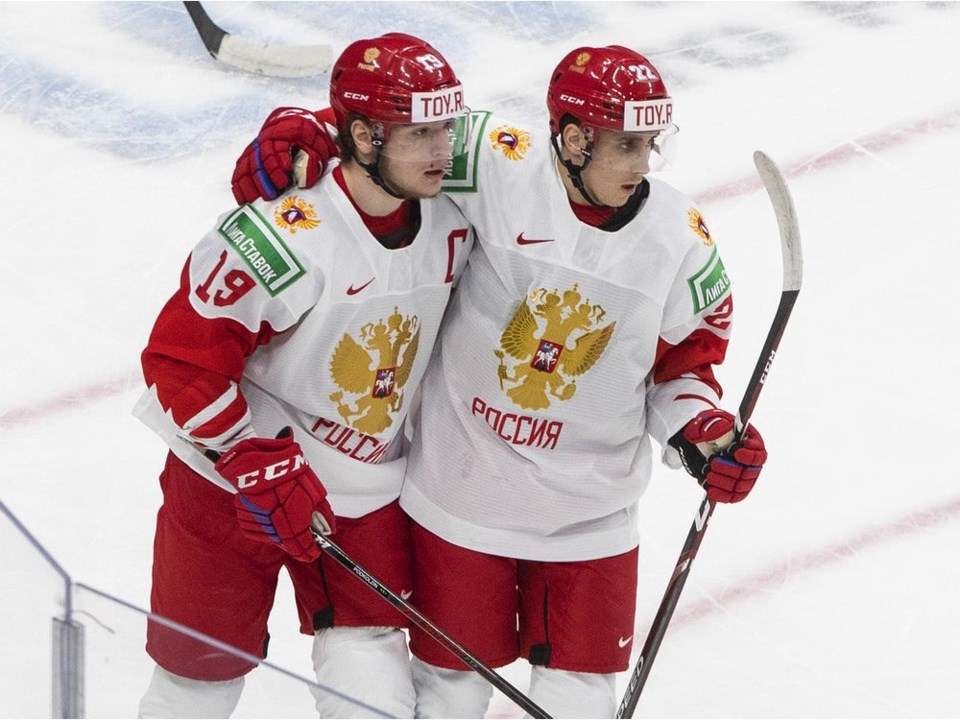 If he didn't score against Austria, it would have been three-straight games without a point for Podkolzin at the 2021 World Junior Championship. He did, but it was only against Austria, one of the worst teams at the tournament, a team that hadn't even scored a goal leading into their game against Russia.

Either way, there was no escaping criticism for Podkolzin. With his lack of production in the KHL, Canucks fans are eager to see Podkolzin put up some points at the World Juniors to prove himself as a prospect. But what is World Junior production really worth?

We can look at a few first-round picks for the Canucks from the past and how they performed at the World Juniors as examples or, at least, cautionary tales.

For instance, Jordan Schroeder holds the record for the most points by an American skater at the World Junior Championship, with 27 points in 19 games across three tournaments. In professional hockey, however, Schroeder was never quite able to crack an NHL lineup full time. He wound up playing just 56 games for the Canucks, scoring 15 points.

Cody Hodgson played in just one World Junior tournament, but was dominant, leading the 2009 World Juniors with 16 points in just 6 games, outscoring teammates John Tavares and Jordan Eberle. A combination of injuries and a lack of footspeed kept him from ever having a similar impact as Tavares or Eberle in the NHL, however.

Then there's Nicklas Jensen, who was the top play for an overmatched Denmark squad at the 2012 World Juniors. He still managed a point-per-game pace at the tournament, putting up 6 points in 6 games, an impressive feat for a team in tough against tough competition. But Jensen couldn't crack the Canucks lineup consistently and played a total of just 31 games in the NHL.

In other words, racking up points at the World Juniors isn't a bad thing, but it's no guarantee of future NHL success. And the Canucks have several examples of the opposite being true.

One of the differences for that group of players is they all had put up points outside of the World Juniors, whether in the CHL or NCAA. A lacklustre performance at the World Juniors could be easily dismissed or explained. Hughes, for example,  played quite well in 2019, but the points, for whatever reason, just didn't follow. Horvat played more of a checking role for Canada in 2014.

The stakes seem higher for Podkolzin because there's seemingly so little proof of his blue-chip status in the Canucks' prospect pool. In his draft year and the year after, he bounced around leagues in Russia, rarely staying long enough in one league to get into a rhythm. This season in the KHL, he has just 6 points in 24 games while getting few offensive opportunities for a team that knows he'll be leaving for the NHL when the season is over.

For Podkolzin, the 2021 World Junior Championship is a chance to shine against his peers and Canucks fans want to see him dominate the way they feel a top prospect should dominate. So, when he was held pointless against Team USA and the Czech Republic in his first two games of the tournament, it was easy to sense the restlessness among Canucks fans. Sure, Podkolzin didn't play poorly in either game, but he didn't assert himself offensively either.

Podkolzin's near natural hattrick versus Austria

Podkolzin did dominate against Austria and was named the player of the game for Russia. He and his linemates, Marat Khusnutdinov and Rodion Amirov, were all over Austria all game, but particularly in the first period when Podkolzin scored two goals and added an assist.

He scored his first goal with a gorgeous shot into the top corner when Austria gave him too much room at the top of the right faceoff circle. Khusnutdinov helped create space by backing his man into the slot and Podkolzin put the puck just under the bar.

His second came in his favourite spot on the ice: directly in front of the goal. He cut to the net after a battle down low and Artemi Knyazev found him with a pass from the point. Instead of just trying to tip the pass on net, Podkolzin pulled the puck across the top of the crease to his forehand to tuck it into the open net.

He nearly had a hattrick a few minutes later. His shot off the rush got through the goaltender and was trickling towards the goal line, where Khustnutdinov tapped it across the line before an Austrian defender could clear it away. Still, Podkolzin got the assist and it was 4-0 Russia.

That was it for points, but Podkolzin kept creating chances for Russia with his vision and playmaking.

His best shift of the game came in the third period. On one shift, he had four fantastic passes to set up scoring chances: a blind backhand pass from behind the net, a one-touch pass into the slot from the right boards, the hustle to get to a puck down low and swing it out front, then a superb cross-ice pass through traffic to a pinching Shakir Mukhamadullin.

It was a shift that showed off Podkolzin's playmaking instincts and illustrated why scouts think he has a good chance of being a top-six winger in the NHL.

Later in the third period, Podkolzin set up Amirov at the backdoor off the rush after beating his man wide, but Amirov didn't get all of the shot and Austrian goaltender Jakob Brandner robbed him with a big glove save.

With the game well in hand and Russia facing Sweden in their next game, Russian head coach Igor Larionov rested Podkolzin in the third period, playing him just 3:42 in the third period, for a total of 14:11 in ice time. It's clear, however, that he could have had an even bigger game than the three points he tallied.

What was most encouraging was Podkolzin's creativity. One knock against him in the first two games of the tournament was that he simplified his game too much. He played his usual strong two-way game, but in the offensive zone often opted to just head to the net when Russia went on the cycle. That gave him few touches on the puck, as he waited for his teammates to create shots and chance.

Against Austria, however, Podkolzin took matters into his own hands and showed a lot more creative flair with his passing. It should be a shot of confidence as he heads into the rest of the tournament.

Vasili, Vasily, or Vasiliy — However it's spelled, Podkolzin should be the Canucks’ next Russian star
Nov 25, 2020 2:25 PM
Comments