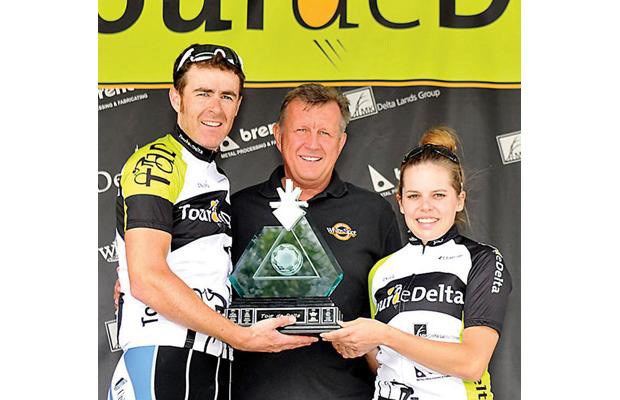 For a tour that has earned a reputation for a being springboard for professional careers, it was refreshing to see one of its most loyal participants awarded the overall prize.

Racing alongside Farrar seven years ago was Andrew Pinfold who has happened to participate in each and every Tour De Delta race for the past 11 years.

The 32-year-old North Vancouver native has enjoyed his share of podium finishes in Delta and also races professionally in Europe with the United Healthcare team. When he left for Italy on Monday, Pinfold could at last add overall Tour de Delta champion to his resumÃ©.

"This is my 11th year here and I've never won the whole thing," said Pinfold. "I fly to Italy tomorrow to race but this race means that much to me that I hung around to do it. I have been doing this for ages and the town puts on such a great race and the crowds are awesome.

"I knew I had to beat Tommy at the finish line (of the road race). It was really tactical but I knew what I had to do and fortunately I had the legs to do it. I'm sprinting pretty well this year and I kind of know my range. This was perfect for me."

One night earlier, Pinfold was edged by Nankervis in the Brenco Criterium in Ladner.

Nankervis surprised the pack by taking off halfway down the back stretch, and held off an impressive field through the final two corners to win the 60 lap race, on the 0.9 kilometer circuit, in one hour, 14 minutes and 20.40 seconds.

"I just went for it halfway down the back straight and made it into the second-last corner third wheel and knew if I came through the last corner in front I wouldn't have anyone pass me," said Nankervis, riding for the RealCyclist.com Pro Team run by three-time Canadian Olympian Gord Fraser, whose 200-plus victories includes Tour de Delta.

"There's lots of strong riders here, I thought I'd be overwhelmed but I got lucky. I went for it really early, I've been doing some really hard training and it paid off."

The men's White Spot Road Race produced one of its best finishes in Tour history as Brad Huff edged Daniel Halloway in a battle of American sprint specialists. Both reached the finish line in a time of 3:24.44.1 in the 140-kilometre trek.

Huff and Halloway were part of five-rider breakaway with three local racers as the field came across after four and a half laps of a smaller circuit in North Delta and rode up into Tsawwassen for 10 laps around the longer 8.8-kilometer trek.

They built a five-minute lead on the potent pack at one point, but the gap was down to just over two minutes with three laps to go. That's when Huff, who won the U.S. Criterium title in 2006, Halloway and David Vukets broke away from the other two. But Vukets cramped up, creating a last lap showdown between the two Americans.

"It wasn't really a 200 meter sprint for us," Huff said of the final straightaway leading to the finish line. "It was more like a three-kilometer drag race. We knew we had the gap and we were trying to commit to hold it. And at the end it was who could push."