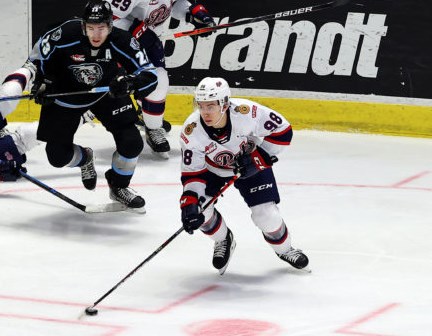 North Vancouver's Connor Bedard makes a play for the Regina Pats during a game against the Winnipeg Ice Saturday, April 3. Bedard was recently named to Team Canada for the 2021 IIHF U18 World Championships. Keith Hershmiller/Regina Pats

North Vancouver hockey phenom Connor Bedard will get to pull on the red and white Team Canada jersey as one of 25 players named to the national men’s under-18 team for 2021 IIHF U18 World Championships starting later this month.

It’s another impressive notch on the stick for Bedard, who last year was the first player to earn exceptional status early entry into the Western Hockey League. The 15-year-old forward has already smashed all expectations in the WHL, leading the league with 22 points through his first 12 games.

He’ll be in a familiar position as the youngest player on the squad when he joins the U18 national team – he’s a full year and a half younger than the next youngest player. Bedard is the only 2005-born player on the U18 team, and there’s only one player – Shane Wright of the OHL’s Kingston Frontenacs – who is born in 2004. The rest of the players on the team are born in 2003.

Bedard will be the third “double underager” to suit up for Team Canada at the U18 worlds, following a couple of well-known youngsters named John Tavares and Connor McDavid.

Toronto Maple Leafs star Tavares was the first 15-year-old to make the team (McDavid was 16 when he played), and Tavares recently gave Bedard a shoutout for becoming the second.

“I’m sure he’s thrilled,” Taveres said in a media session. “He’s very well deserving and obviously there’s a lot of belief that he can make a great impact. Hats off to him. It was a great experience for me. It was my first time getting into the Hockey Canada, Team Canada environment and what that’s all about. And great memories – I still remember it like it was yesterday.”

The team includes one other B.C. native, Logan Stankoven of Kamloops. The 18-year-old forward plays for his hometown Kamloops Blazers in the WHL. There are no players from the QMJHL on Team Canada's roster, as the Quebec-based junior league will be in the middle of the playoffs during the tournament.

The U18 World Championships are scheduled to run from April 26 to May 6 in Frisco and Plano, Texas. All players and personnel must self-isolate at home starting April 12 and quarantine for four days upon arrival in Texas before starting a pre-tournament camp.

Canada will face Finland in a pre-tournament game April 24 at 6 p.m. Pacific time and open the tournament against Sweden April 26, also at 6 p.m. Both of those games will be broadcast on TSN. Canada’s preliminary round pool also includes Latvia, Switzerland and Belarus.