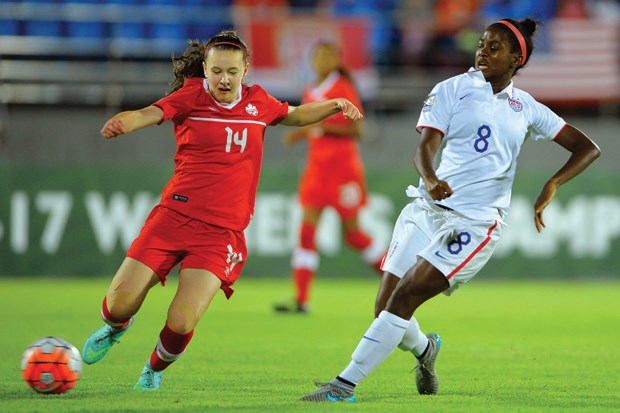 North Vancouver’s Caitlin Shaw tees up a shot while Brianna Pinto of the United States defends during the CONCACAF Under-17 championships in Grenada. The Canadians lost to U.S.A. but bounced back to earn a berth in the upcoming FIFA U-17 Women’s World Cup.Canada Soccer by Mexsport

North Vancouver’s Caitlin Shaw has always been one of the youngest, smallest players on any soccer field that she’s played on, so why should it be any different when she’s battling with Team Canada for a berth in the World Cup?

Canada Soccer’s national U-17 team, including 14-year-old Shaw, is on the way to the FIFA U-17 Women’s World Cup after beating Haiti 4-2 in the third-place game of the CONCACAF Under-17 championships March 13 in Grenada. Canada will join the United States and Mexico as CONCACAF representatives at the World Cup tournament scheduled to run Sept. 30 to Oct. 21 in Jordan.

“Our team worked so hard to get to that point,” Shaw told the North Shore News after returning home from Grenada. “All the training sessions, hard work finally paid off. It just felt good. … It’s like a dream come true.”

Shaw, a Grade 9 student at Argyle secondary, is one of the youngest players on the Canadian team – one of only four 14-year-olds on the squad that went to Grenada – but that didn’t stop her from hitting the pitch for a pair of starts in the World Cup qualification tournament, including a 3-0 round robin win over Guatemala and a 5-0 loss to the United States in the semifinals.

Caitlin’s dad Wayne Shaw, a long-time coach on the North Shore, said his daughter is used to playing with players one or two years older than her as her high skill level has forced her to do that throughout her soccer career.

“She always played one or two years up, but she was a small kid,” he said. “That was one challenge she always had. She was half the size of the other girls but she always had more technical skills. And then I think over the years – and even now she’s still not a big girl – but she’s learned to be tough and competitive.”

For Caitlin, however, age is irrelevant once the ball starts flying.

“I try not to look at it that way,” she said. “One thing Canada Soccer always says is ‘If you’re good enough, you’re old enough.’ I think if I don’t see myself as the younger player, I won’t act like it and I’ll just take responsibility.”

It’s been a quick rise through the soccer ranks for Caitlin, who started playing organized soccer when she was five. Her father Wayne, mother Carmel and older brother Brendan were all soccer-mad – mom and dad met at Capilano College where they were both playing soccer for the Blues. When Caitlin came along, soccer was a given.

“She didn’t have much choice at all,” said Wayne with a laugh. “She had soccer roots in her family, that’s for sure.”

It was no surprise that Caitlin took to the sport right away.

“I instantly fell in love with the game,” she said. “It just kind of went off from there.”

Caitlin would spend hours and hours every week kicking a ball around at Kilmer or Kirkstone Parks near her family’s Lynn Valley home.

Others soon noticed. Caitlin was twice selected to the Western Canadian all-star team for the Danone Nations Cup, an elite competition for children age 10-12. According to Wayne, Caitlin is the first Canadian girl to earn two invites to the tournament and also the first girl to score in the co-ed national championship game.

At the start of her Grade 8 year Caitlin joined the Whitecaps girls elite program and her game has blossomed under the tutelage of head coach Emma Humphries.

“The Whitecaps elite program has probably been the turning point for her,” said Wayne. “The creativity is what she’s learned. We’ve always stressed her technical skills, but she’s become a player that’s very creative. She’s more of a playmaker who has got a real competitive edge. She’s learned to play with toughness and grit, especially having to play two years younger for all those years. I think she’s become a more balanced player from before. … Emma has had a huge impact in her life in terms of believing in her and just giving her that confidence that she could make a national team.”

That confidence helped Caitlin make her national team dreams a reality. She was sitting in class a couple of months ago when an email popped up on her phone telling her that she’d been selected to play with Team Canada at the CONCACAF championships.

“I had to keep it on the down low because I didn’t want to get in trouble for going on my phone,” she said. “I was so excited. I was over the moon.”

Playing a holding midfield position, Shaw started Canada’s first game of the tournament, completing 24 of her 28 passes in her 59 minutes on the field, according to CONCACAF’s stats.

“I feel like everyone sort of underestimated (Guatemala)” she said. “They’re a great team, they were good at moving the ball. I think our team just stuck to the game plan and came out with the win, which was pretty great.”

Shaw then was back on the pitch for the first half of the semifinal against the United States. Canada kept it close throughout the half, only falling behind 2-0 on a goal in injury time. Two more injury-time goals at the end of the second half made the score a lopsided 5-0.

Wayne applauded Canada Soccer and U-17 head coach Beverly Priestman for throwing younger players like Caitlin into the fray.

“She’s not afraid to try these young girls out,” he said. “I think they would never do this years ago but now they’re looking at sort of the big picture of the national team and promoting these younger girls. I guess they base it on, if they’re good enough, they’re ready.”

The Canadians erased their semifinal disappointment two days later by booking their World Cup spot with a win over Haiti.

“Everyone was just smiles, jumping on each other and filled with excitement,” said Caitlin. “It’s something we’ve been working for our whole entire lives. It was great to have it finally pay off.”

Caitlin will now set her sights on making the World Cup team. There will be another selection camp before the tournament but she’s hoping her experience in Grenada will give her an inside track.

“(Making the World Cup team) is the big goal here, the big picture. I just have to work harder to make it for sure,” she said, adding that if she does make it to Jordan she and the rest of the Canadian players will have only one goal in mind.

Canada Soccer will take centre stage at BC Place Friday with the men’s national team hosting Mexico in a World Cup qualifier. Kickoff is scheduled for 7 p.m.

Mexico leads Group 1 in the fourth round of CONCACAF qualifying with six points through two games while Canada is second with four points. El Salvador has one point while Honduras has zero. The four teams will play home and home games against each other with the top two teams advancing to the final round of qualifying.

Canada and Mexico will play again Tuesday at Estadio Azteca in Mexico City.