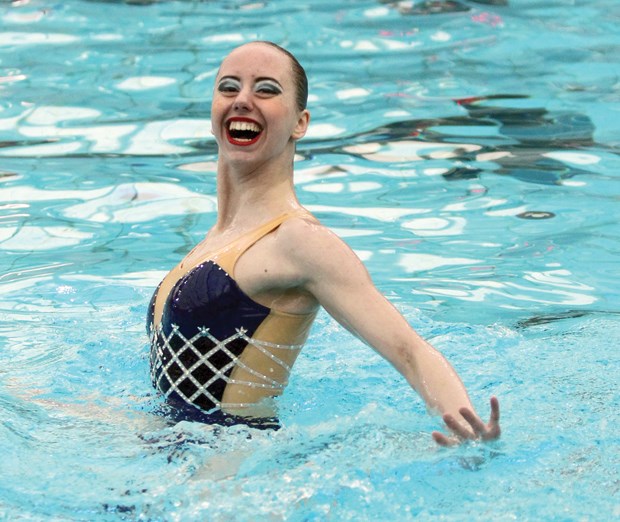 North Vancouver’s Stefanie Dickinson has parlayed her prowess in the pool into a spot on the junior national team headed to the FINA Synchronized Swimming World Championships this July in Kazan, Russia.

She’ll be spending the next two months in Montreal polishing a routine with 10 of the best junior synchronized swimmers in Canada. The only problem with that timeline is that it will take the 17-year-old away from Handsworth secondary for her final two months of high school.

There’s a touch of sadness in her voice as she talks about missing her prom. But is it worth it for a chance to compete for Canada against the world’s best?

“For sure,” she said with a laugh when the North Shore News caught up with her last week, just a few days away from her move across the country to Montreal. “I think it’s a cool way to end my high school/junior years.”

It’s an important move for her and her teammates as well. They’ve got to get their routine nailed down tight before the big show in July, not just for performance reasons but for their own safety as well. Synchronized swimming is not a sport that can be done on the fly.

“Injuries occur more than you would think,” Dickinson said, adding that the throws, known as “highlights,” provide the most excitement to their routines but also the most danger. “It takes a lot of co-ordination. Everybody has to know exactly what they have to do because everyone has a different role. … If they go up and come down in the same place, that’s a concussion right there. There are a lot of concussions. I’ve had a few near misses but nothing serious.”

Moving away from her school friends is tough, but a bright spot for Dickinson – who is the only B.C. swimmer on the junior national team – is that she’s got new friends waiting for her in Montreal.

“You really develop a closer bond than you do with your normal school friends, in my opinion, just because you’re typically doing more difficult tasks and you spend a lot of time together in the pool and out of the pool,” she said. “Having that bond is pretty important for a team, you’ve got to be able to trust your teammates. You get pretty close with each other.”

Dickinson started her swimming career with North Vancouver’s Cruisers Aquatics where she got to try out all types of water sports.

“I wasn’t a huge fan of speed swimming because you’re just swimming up and down the pool,” she said with a laugh. “Synchro was a fun aquatic alternative.” She swam with the Cruisers synchro team from age 10 to age 14 at which time she moved over to the Vancouver Pacific Wave club where she soon joined their high-performance team.

Now in her last year of their junior program, she been training approximately 25 hours each week in the pool and out with her VPW teammates. As one of the taller athletes on the team, Dickinson’s normal role is to help form the base for the big stunts, helping to launch the smaller swimmers into the air. The sport also involves a lot of underwater work. When motionless and relaxed, Dickinson can hold her breath under water for about two and a half minutes. That number goes way down, however, when in the heat of a routine.

“You really feel your endurance when you’re not breathing,” she said. “If you’re moving around and actually exerting a lot of energy – which is what you’re typically doing during a routine – you probably stay under 30 seconds maximum at the beginning of a routine maybe, and less at the end.”

This will be Dickinson’s second stint on the junior national team – she competed last year at an event in Calgary for North and Central American teams. The world championships, however, will be her first big global event.

“To get to watch the best in the world live will be amazing,” she said, adding that competing for your country adds a whole new level to the sport. “It’s really fun because there’s all these Canadian supporters who you don’t know but they’re all wearing red and white and holding Canadian flags and cheering you on. The support is amazing.”