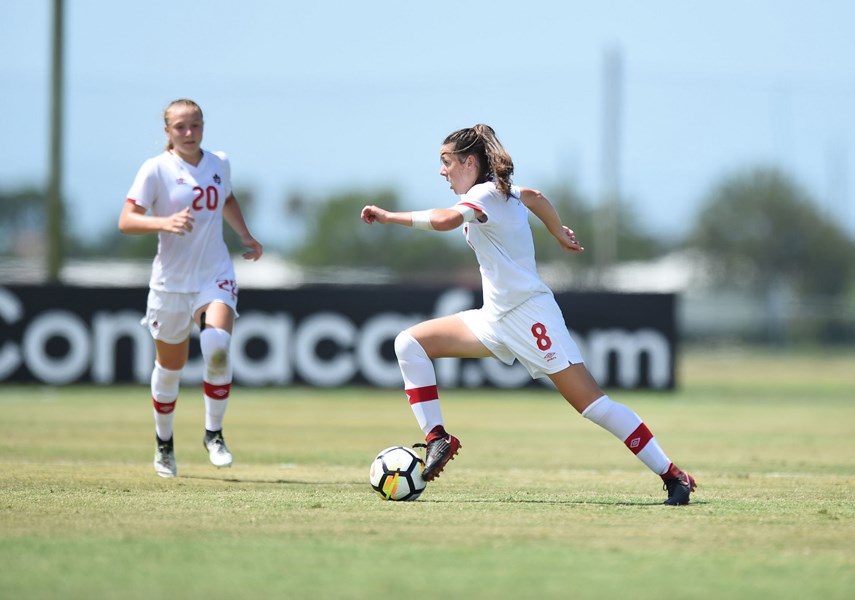 Caitlin Shaw goes on the attack during the Concacaf U-17 championships held earlier this year. The North Vancouver teenager will suit up for Team Canada in the FIFA U-17 World Cup starting next week in Uruguay. photo Billy Dzwonkowski/Canada Soccer

Then again, not too many soccer players of any age can play like North Vancouver’s Caitlin Shaw.

The teenager will suit up for Team Canada at the 2018 FIFA U17 World Cup running Nov. 13 to Dec. 1 in Uruguay, her second appearance at the U17 World Cup. Shaw was one of only three 15-year-olds to play for Canada at the last U17 World Cup, held in Jordan in 2016. She’s two years older now and should be one of the central stars as Canada chases the World Cup against many of the best youth players in the world in the 16-team tournament.

Shaw is in fine form as well, having just earned Most Promising Player and BMO RESP Youth Soccer Player honours at the 2018 Vancouver Whitecaps FC Player Awards ceremony held Oct. 24 at North Vancouver’s Polygon Gallery. She joined the Whitecaps program in 2015 and is now a member of the Whitecaps FC Girls Elite Super REX Centre in partnership with BC Soccer.

This year she has played for the Canadian national team in both the U20 and the U17 Concacaf Women’s Championship tournaments. She picked up an assist in a huge 2-1 win over Haiti in the Concacaf U17 championships in June, a result that clinched Canada’s place in the 2018 World Cup. The tournament featured some added drama as the championships started in Nicaragua in April but the teams were forced to evacuate as political protests and violence erupted in the Central American country. The championships were completed two months later in Florida with Canada finishing third behind the United States and Mexico.

In Uruguay Canada will be in a group with Korea Republic, Spain and Colombia. They’ll open their tournament Nov. 14 against Colombia, play Korea Nov. 17 and end group play Nov. 21 against Spain.

The playoffs begin Nov. 24 and wrap up with the final on Dec. 1 at Estadio Charrúa in Montevideo.