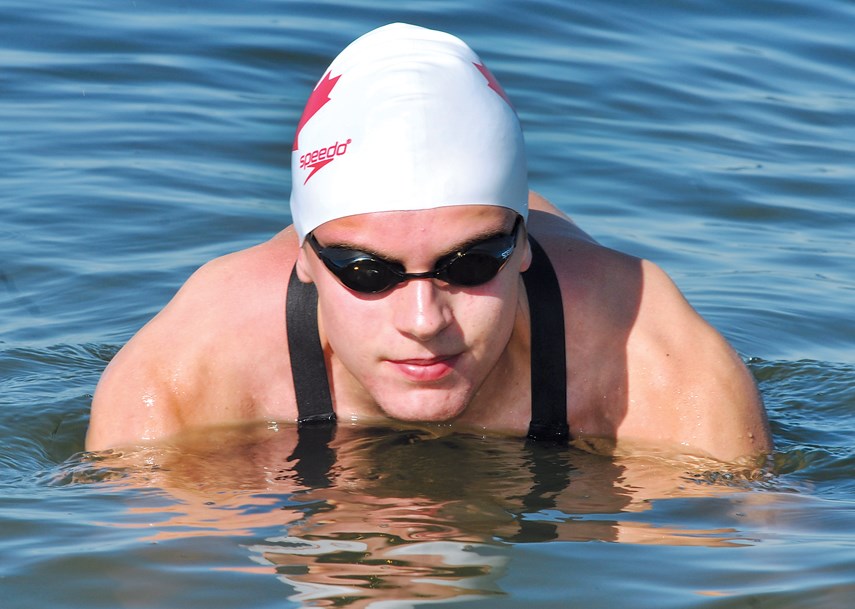 Winning swim races in a pool takes a lot of skill and strength, but the competition gets a little murkier when swimmers leave the lanes and venture out into open water to race elbow to elbow (and sometimes elbow to ribs, or foot to face).

North Vancouver’s Raben Dommann has learned all about the open water world while becoming one of the country’s top junior racers. The Chena Swim Club member recently returned home from the 2017 UANA Pan American Open Water Swimming Championships where he won one gold medal and two silver medals in the junior category and finished fourth in an open men’s race featuring some of the best open-water swimmers from North, Central and South America.

“It’s just fun,” Dommann said about racing in the great outdoors. “You get to kind of play with other people, not just be doing your own thing in your own lane.”

You also have to keep your wits about you. At the Pan Am championships held in George Town, Cayman Islands, one of Dommann’s teammates got a nasty surprise.

“She got kicked really hard in the face and actually split her nose open,” said Dommann. “She had to get that glued together.”

Dommann has never been hit that hard, but he knows there’s danger lurking in every stroke during an open-water race.

“I never got hit that bad – just a couple elbows to the ribs,” he said. “You’ve just got to be aware. And don’t break any rules – don’t kick anyone or stuff like that. If you get caught pulling on someone’s foot or kicking them, then you’ll get a red card and you’ll be disqualified.”

He did, however, learn a tough lesson during the Pan Am championships when he lost a gold medal because he missed his first swipe at the timing board at the end of the five-kilometre junior men’s race. By the time he made his second attempt at the board, fellow Canadian Alexander Katelnikoff had caught him from behind. Dommann finished second, losing gold by less than a second after swimming for more than an hour.

“It was just a learning experience really,” said Dommann, adding that he and Katelnikoff are friends who have raced with and against each other for years. “We just laughed about it, really.”

The two racers also teamed up to help Canada earn gold in the mixed junior 2.5-km relay. The fast friends took the first two legs and opened up a sizeable lead that was maintained by Mant Anderson and Mananne Rheaume.

“I was pretty tired in that one,” said Dommann. “2.5 km you’ve got to go hard for the whole distance. There’s no easy pace because everyone is just going hard.”

The Pan Am championships were the first international competition for Dommann, who was born in South Africa and moved with his family to Australia when he was seven. It was in Australia where his swimming career kicked into high gear, and he continued that fast pace when he came to North Vancouver at age nine. He’s done all of his training in pools, but tried his first outdoor races a couple of years ago and now competes both indoors and out.

“It’s quite a bit different,” he said of tackling an open water swim. “There are a lot more tactics involved, it’s not just swim in your own lane, do your own thing. You can draft off of people – there’s just a lot more strategy. And there are also currents and waves and stuff to deal with. I actually enjoy it a lot more.”

There are other concerns as well beyond flying elbows and crashing waves.

“I saw quite a few stingrays and octopuses and things like that,” he said about his races in the Caymans. “But they don’t bother you. … (You) just don’t think about it. Just keep swimming.”

This summer he’ll be competing in the pool – he races freestyle distances ranging from 200 to 1,500 metres, as well as the 200-m butterfly – and in open water for Team British Columbia at the Canada Summer Games. He also has his eye on a bigger prize down the road.

“I’ve always been kind of looking at the 2020 Olympic Games,” he said, adding that the open water event may be his best ticket to the Tokyo 2020 Games. And though his past has seen him living in countries around the globe, he hopes his future will have him competing for many years with a Maple Leaf on his cap.

“It was really a great experience,” he said of representing Canada in the Cayman Islands. “It felt really good. Hopefully I can do it again soon.”