North Shore teams scored a lot of medals at BC Soccer championships held recently across the province.
Jul 10, 2019 10:41 AM By: Andy Prest 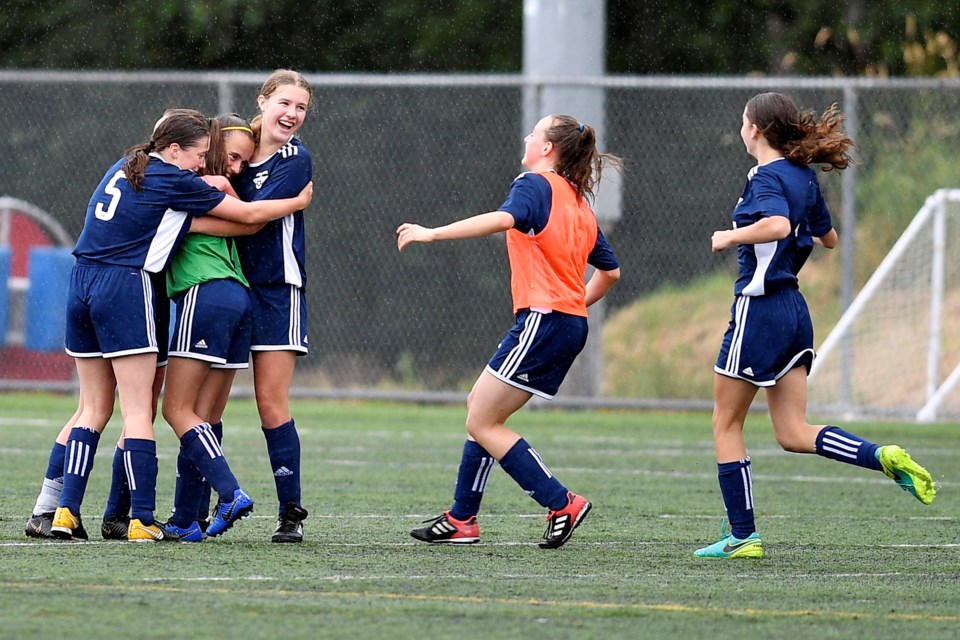 Members of the NSG Avalanche celebrate during their 1-0 win over the CMF Thunder in the U14 B Cup girls provincial final held July 7 at Burnaby Lake Sports Complex West. photo Jennifer Gauthier, Burnaby Now

North Shore teams scored a lot of medals at BC Soccer championships held recently across the province.

At the top level, the North Shore/Burnaby-based Mountain United FC scored a pair of golds and one silver in BC Premier Cup finals held June 22 at Cloverdale Athletic Park.

The MUFC U17 boys scored a provincial title, knocking off Surrey United SC 1-0 in the final. The club’s U13 boys also came away as champions, defeating Coquitlam Metro-Ford 3-0 in the final.

At the U14 level the MUFC boys fell just short of gold, losing 2-1 against Surrey United SC in the final.

At the U14 girls level the West Van Rangers 05 team took top spot, beating the Kelowna United Junior Heat 1-0 in the final. In boys U13 action the NVFC Selects scored gold with a convincing 4-1 win over BDMS United in the A Cup final.

In girls U18 A Cup action the NSG Renegades earned silver, losing 2-0 against SDU-DCS in the final, while the West Van Rangers 04 team fell 2-1 against the Upper Island Riptide in the U15 girls A Cup final.

The North Shore Girls also claimed gold at the B Cup provincials, with the NSG Avalanche topping the CMF Thunder 1-0 in the U14 final held July 7 at Burnaby Lake Sports Complex West.