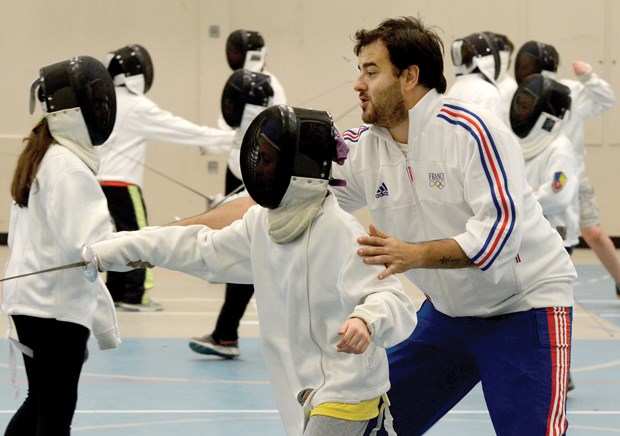 Eric Boisse, a 2004 Olympic champion from France and three-time world champion, works with Pauline Johnson elementary students during a recent fencing introductory class. As part of a new initiative in the West Vancouver school district, approximately 2,200 students from grades 2 to 10 will receive fencing instruction during their physical education classes between now and the end of June.Mike Wakefield, North Shore News

Fencing is making a comeback.

Many students in West Vancouver have recently received an introductory lesson in the medieval sport, and the positive response has been overwhelming, said Diane Nelson, district principal of West Vancouver's sports academies.

Introverted students who might not normally play team sports are actively participating in fencing, Nelson said. "It's really an intellectual sport, and it seems to attract shyer or quieter students because they're very focused," she said, adding that they tend to do well right away.

"When they're donned in this special protective clothing, they're hidden away," she said. "We're seeing their energy and enthusiasm come forward, perhaps because they're behind a mask.

"When you watch the fencing in the gym, every single student is engaged and active, all at one time," Nelson said. "That's what we're looking for."

École Cedardale student Zoë Golay, 12, said she enjoys fencing because everybody in the class is learning together.

"Sometimes kids have an advantage because they've been playing sports like soccer or basketball for a long time," she said. "But with fencing, we're all starting from the same point, so we're equal."

Golay said she wants to learn more about the history of fencing since the introductory lesson.

"For students who do a lot of reading, fencing attaches an element of reality to their books," she said. "It takes them to another time."

Igor Gantsevich, the students' fencing instructor and a former national champion, said that by the end of the introductory session, students are begging him not to leave.

"Everyone is having fun, which is the most important thing," he said. "And every single kid is also learning something brand new."

Because there isn't a particular body type that does well in fencing, anybody can excel, he said. "It doesn't matter if you're tall, big, short or skinny."

Approximately 2,200 kids from grades 2 to 10 will receive fencing instruction during their physical education class by the end of June, Nelson said.

The school district is also hoping to pilot an after-school club at Cedardale before the end of the school year, she said. The program would involve minimal fees for participating students to cover the cost of the instructor, she said, and the equipment would be sponsored by the Future of Fencing charity.

"What we're trying to do is move students from the school setting to the Olympic games," Nelson said. "As we move them through the various levels of the sport and get them more involved, there are also tremendous opportunities to receive scholarships to various universities, including Ivy League schools."

By putting a fencing program in place at the elementary school level, Nelson hopes to increase interest at the secondary level.

"Our vision is an international academy on the North Shore where students from all over the world would come to train," she said. "We hope that students from West Vancouver would funnel into this academy and receive scholarships for Ivy League schools."

"I don't think that the kids have realized the tremendous opportunities that are available to them yet," she added.