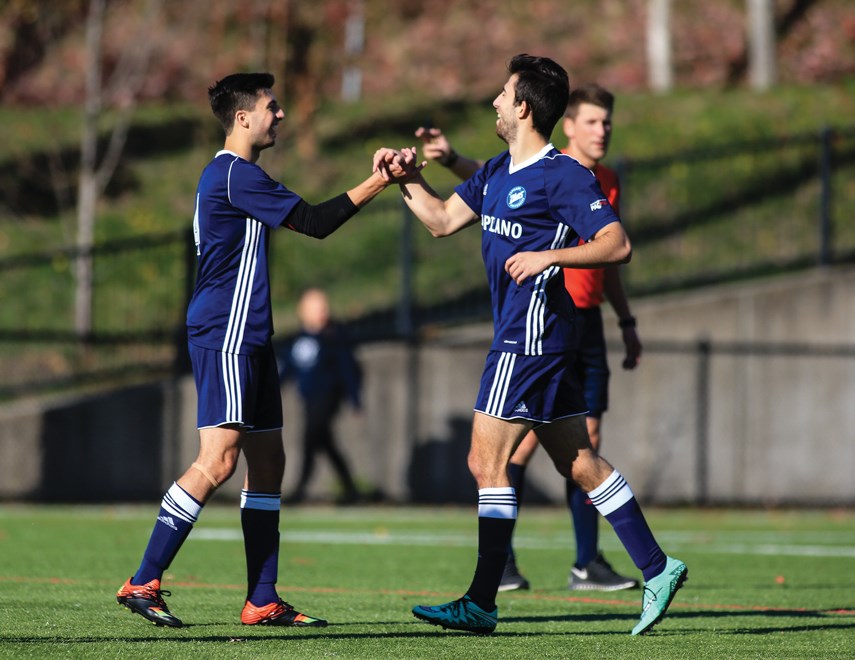 Nicolas Morello certainly took the term “going out with a bang” seriously during his final match with the Capilano Blues.

The fifth-year defender got to play up front for the Blues in the bronze medal match at the PacWest championships and ended his Capilano career by scoring four goals in a 5-1 win over Vancouver Island University. Morello scored early and often, notching his first goal just three minutes into the game and tallying a hat trick before the game was 20 minutes old. VIU somehow managed to hold him off the scoresheet for the next 60 minutes, but Morello broke through again in the 75th minute with his fourth marker, setting a record for most goals in a PacWest championship tournament game.

Morello was the biggest bright spot for the Blues as the team fell short of its bid to win a third straight PacWest title. Coming into the tournament ranked No. 2 in the league, Capilano fell 3-2 to the third-ranked Douglas College Royals in the semifinals played Saturday at Quest University.

Douglas College raced out to a 2-0 lead in the first half and pushed their advantage to 3-0 early in the second half before the Blues finally got on the board with Matt Fedak heading in a Marco Favaro free kick to make it 3-1. Moments later Morello finished off another cross to make it 3-2 and set up a frantic finish. Through the final half hour the Blues threw everything they had at the Royals but were denied by several spectacular saves by goalkeeper Ryo Mizuno, as well as the crossbar.

The Royals went on to claim the PacWest title with a 3-0 win over Quest in the final. Morello was named the tournament’s top defender.