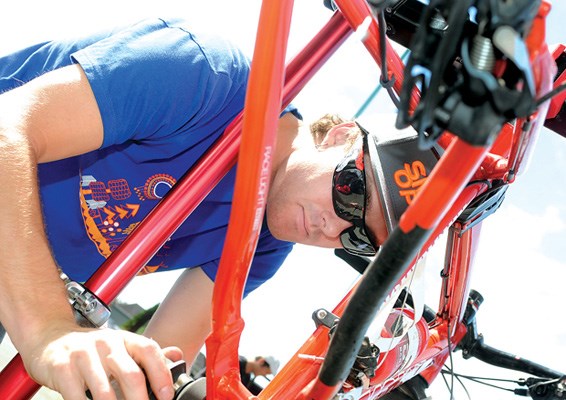 Kona Factory team mechanic Dave McNaught does some tinkering before the launch of the BC Bike Race July 2 in North Vancouver.NEWS photo

THE words "epic stage race" aren't normally paired with the word "rehab" but, then again, North Vancouver's Manuel Osborne-Paradis never was one to take the normal route.

The Olympic alpine skier suffered a broken leg and torn ACL in a crash in late January but last week he was back flying downhill as one of the participants in the BC Bike Race seven-day mountain bike stage race.

The event took him and 450 other racers through the mountain bike trails of North Vancouver, Vancouver Island, the Sunshine Coast, Squamish and Whistler. At the end of it all Manny was still in one piece, his left leg sore but strong. Alpine Canada signed off on the ride as a way to give Manny a break from his monotonous rehab and training while also improving his endurance. The Deep Cove native said he was happy to get out and enjoy the ride while also putting his body to the test.

"There's no real reason to put yourself in a bubble," he said. "If you get injured, you get injured. You can't just be kind of tiptoeing around life. You're not going to be good at your sport by doing that."

He did, however, hit the dirt a couple of times.

"There were a couple of crashes but I have a mountain biking background and I was pretty confident in my skills and what I needed to do," he said. "Growing up in Deep Cove I was on my bike every day. . . . I kind of wanted to be a mountain biker when I grew up."

Completing this challenge actually has Osborne-Paradis feeling more confident about his ski season, he said, adding that he is currently on pace to be in the start gates for the opening World Cup race in Whistler.

"When you go back to skiing you need to mentally trust your leg and . . . I trust it quite a bit more than I did before," he said. "I didn't know what I could put it through and putting it through seven days of grinding biking you realize that it's getting better and it's getting stronger and you can do a lot of wear and tear to your legs without your knees hurting."

Though he made it all the way through the race, Manny doesn't see a career switch coming any time soon.

"No, no!" he said with a laugh, adding that he's shaped a little bit differently than the elite riders that took part in the BC Bike Race. "I'm carrying 60 extra pounds on me and I don't think I'm losing that 60 pounds anytime soon."

He does hope to be back again next year, though.

"It's good just to get out of the gym and do something different for one week," he said. "I was really impressed with how well they run it. It actually is a huge setup and event to put on with the ferries and all the people and camping and needing to get bikes places and people breaking down with their bikes, and food and everything - it's a huge ordeal."

North Vancouver's Dave Howells, the race's media manager, said they'd be happy to have Manny back any time.

"Manny is such a nice guy - he comes across the line and he's got a smile on his face and he's happy and he's been riding some really fun single track and having a great time," he said, adding that it took some courage for Osborne-Paradis to tackle the race so soon after his injury. "It doesn't surprise me that he's taking it on because here's a guy that pushes himself out of the (ski) gate and within a matter of seconds

he's doing 140 kilometres per hour down the side of a mountain. You look at the downhill skiers and there's an enormous amount of courage that it takes to do that and I think that aspect was carried over into BC Bike Race and I think he went into it with a very positive attitude."

Manny is not the only one who is keen to hit the trails again next year. Sales for the 2012 race opened up on Monday and the event is already more than 60 per cent sold out. Howells said the buzz generated during this year's race is pushing the sales for next year.

"The world is watching and they're seeing all these Dave Norona videos, phenomenal pictures from all these amazing photographers, people blogging, Facebook, emails, newsletters, press releases and after a while people are like, 'I can't take it, I've just got to go do this event. It sounds way too good.'"

There's a strong North Shore presence amongst the staff and organizers of the race and Howells said he is amazed at what it has become in only its fifth year of existence.

"It's nothing but a success story. International stage racing has become very competitive - most countries around the world are hosting an international stage race - but it is great to see, and I feel strongly about saying this, BC Bike Race has absolutely solidified themselves as arguably one of the top three or top five mountain 7 bike stage races in the world right now. We are up there with all the other big guns and it's just going to continue to grow. s We're just getting going."

For full results from the 2011 race visit www.bcbikerace.com.