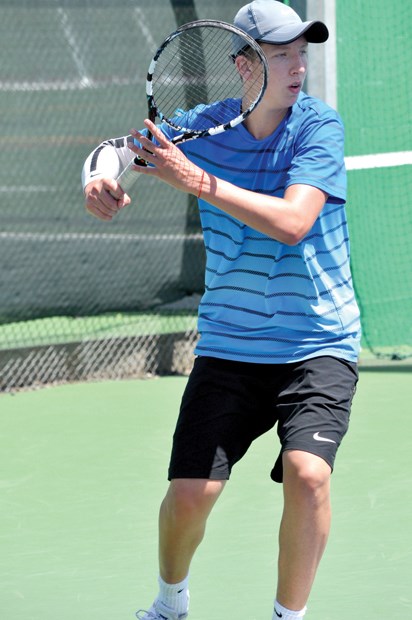 North Shore resident Max Korkh, one of the top 10 juniors in British Columbia, loads up a forehand during the Leith Wheeler Stanley Park Open. photo supplied

In Max Korkh’s family, the apple doesn’t fall far from the tree. Or in this case, the tennis court.

North Shore resident Korkh, 17, is one of British Columbia’s Top 10 under-18 tennis players and is ranked in the Top 40 in Canada. His father, renowned coach Vadim Korkh (he’s the former coach of Vasek Pospisil), was once the top U18 player in the former Soviet Union. Vadim has been his son’s coach ever since he handed him a racquet when the child was just five years old.

Max is competing in the Leith Wheeler Stanley Park Open, North America’s largest amateur tennis tournament, for the first time this year. He’s competing in the men’s doubles, men’s singles and mixed-doubles category. Why hasn’t he played the Stanley Park Open before? In the summers, he usually goes to Russia to train, but this year he wanted to play in the historic, 84-year-old tournament. So far, he says, it’s been “absolutely amazing. There are events for all levels and all ages, from young kids to older players. Everyone competes fairly and I love it.”

He says the Open provides the chance to compete with the best players in the province. Max has played the sport competitively for the past eight years.

“Tennis is part of me,” he says. He trains with a number of different organizations, including the National Training Centre, a player development program operated out of the North Shore Winter Club.
Max says his serve is his best asset — powered in no small part by his almost six-foot-four frame. The high school student, who enters Grade 12 this September, goes on to provincial and national competitions after the Open. After graduating, he hopes to get to university on a tennis scholarship.

The Stanley Park Open is running until July 19. For more information visit tennisbc.org/2015-stanley-park-open.