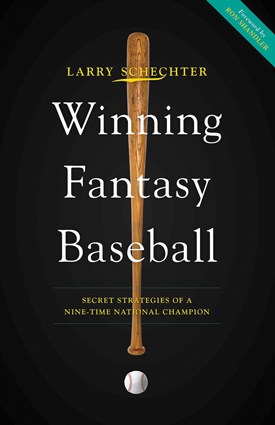 It’s hard to believe with white stuff blanketing the ground across much of the continent, even here in usually snow-proof Vancouver, but today real baseball players are playing real baseball games as the Grapefruit and Cactus Leagues get underway.

It’s a beautiful day for fans of Major League Baseball. For many fans of fantasy baseball, however, it’s time to get to work. If you’re a fantasy baseball player tired of sitting in the middle of the pack and willing to put in the work to improve, Larry Schechter’s new book Winning Fantasy Baseball: Secret Strategies of a Nine Time Champion could be just what you need to grab that real glory in your fake league.

Schechter comes with impeccable credentials. He is the first-ever two-time champion of the CDM Sports national salary-cap challenge, a winner of the USA Today-sponsored LABR league, and a six-time winner of the Tout Wars expert league, likely the most famous fantasy sports league in the world. The guy knows what he’s doing.

In this book Schechter lays out his strategies in easy-to-follow language. Fantasy baseball, more than any other fantasy sport, is a pure numbers game and Schechter describes how he takes the luck out of it by getting the most value possible when picking players.

Schechter says he’s not a math major or rocket scientist — he claims he dropped out of high school calculus because his teacher made them learn a formula “simply because it plotted a fluegelhorn around the x-axis” — but the numbers do start flying around pretty early on in the book. The good news is if you’re not keen on doing your own math — something that Schechter advises players to do — he provides shortcuts to get around that.

This book is purely meat and potatoes. If you’re looking for wacky antics you should check out Matthew Berry’s Fantasy Life. If you don’t play fantasy sports and never intend to, you’re in the wrong section of the bookstore. But if you want to become a better player, this is likely the best place to go. If you’re new to the game, this is a great way to go straight to the top. Even if you’re already dominating the rest of the nerds in your fake league you’ll learn a thing or two (or 75) from Schechter.

The book touches on the basics of the game, auctions, snake drafts, mixed leagues, AL/NL only leagues, salary cap leagues, keeper and dynasty leagues and everything in between. It’s not full of sexy sleepers or sneaky tips — in fact, Schechter quickly blows up many of the old clichés like ‘don’t pay for saves’ that many players hold dear. This, plain and simply, is a straightforward plan you can follow year after year to give yourself a great shot at winning your league.

You may not agree with everything he says but, then again, you may not be a nine-time national champion. Schechter is, and now you can find out how he did it.