Bruins fight back after forfeit in first game of provincial championships
Nov 25, 2016 2:12 PM By: Andy Prest 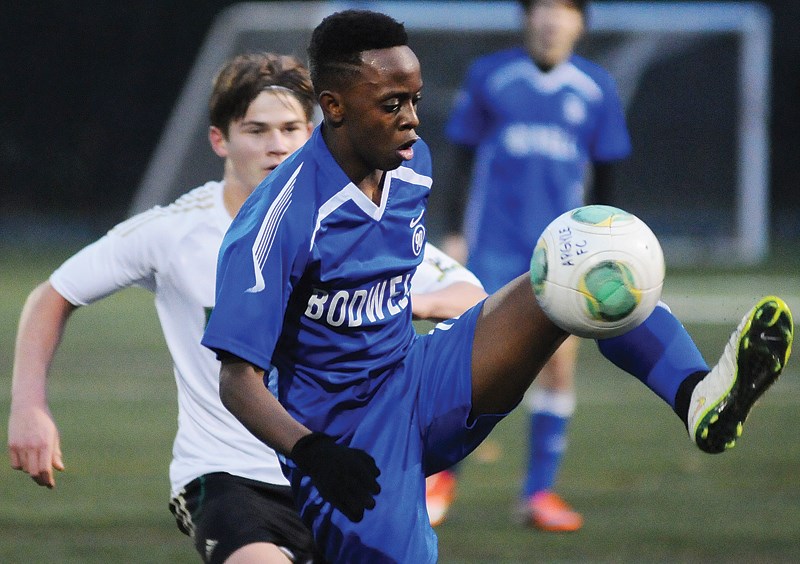 Long championship runs always have some intriguing twists and turns, but few can likely rival the bumpy road that ended in silver for the Bodwell Bruins senior boys soccer team this season.

The North Vancouver-based boarding school that caters to international students scored their first ever soccer medal at the provincial AA level when their championship run ended in a 2-1 loss to St. Michaels University School Wednesday at Burnaby Lake Sports Complex West.

The biggest twist, however, wasn’t at the end of the tournament but at the beginning, when a 4-0 opening round win over Prince Rupert’s Charles Hays was turned into a 1-0 forfeit loss because one of Bodwell’s players wasn’t properly registered with BC School Sports by kickoff time. In a tournament in which you have to finish on top of your four-team pool to have any chance of winning a medal, the Bodwell boys were nearly left for dead before a single ball was kicked.

The season was saved, however, by a bit of good fortune when the two other teams in the pool, Pitt Meadows and Sa-Hali, tied 1-1, leaving Bodwell an opportunity to come back to life. The Bruins needed to be perfect the rest of the way though, and they were, beating Kamloops-based Sa-Hali 6-0 and Pitt Meadows 2-0 after sorting out their registration problems. With Charles Hays losing their two other round robin games, the Bruins parlayed good fortune and good play into top spot in the pool.

“Everything worked out exactly as planned,” said Bodwell head coach Doug Graham with a laugh. “When you go to provincials there are many, many good teams, and whether you get second or 10th, there’s not a lot of difference between them. You have to be good, but you also have to be lucky. We did our part by being good, and the gods looked at us and decided we’d be lucky too.”

The next bump in the road was a semifinal matchup against Langley Fundamental, a game that appeared to be slipping away from the Bruins when the Titans went up 3-1 early in the second half. Bodwell pulled within one with 20 minutes left in the game and then tied it up five minutes later when star central defender Tatsuhiro Izawa joined the rush to fire home a shot from outside the 18-yard box for his second goal of the game.

Izawa was named as Bodwell’s representative on the Commissioner’s 11, an all-star team of the tournament’s top players.

“He came up big,” said Graham of Izawa, the team captain. “He’s a true leader. He’s very passionate for the game, but very supportive of his teammates. He was an excellent defender throughout the tournament. I put a lot of responsibility on his shoulders and he came through time and time again.”

The semifinal stayed even at 3-3 until the second overtime period when attacking midfielder Tako Nyabadza blasted home the game winner to put an end to a thriller and send the Bruins to the championship game.

“From a spectators’ viewpoint it was fantastic,” Graham said about the rollercoaster semifinal. “I thought the two teams worked very hard. Both teams were good, fair teams – there was no dirty play going on. It was very evenly matched, both teams had a little bit of run here and there. With them going up 3-1 it was looking pretty frail, but we got one back and that kind of lit the fire under us one more time. … It was a remarkable comeback.”

Bodwell’s golden dreams seemed to be coming true when Izawa slammed home a header to give the Bruins a 1-0 lead in the final but SMUS stormed back, potting two goals in the final 15 minutes to claim the championship.

“They were very good, very disciplined, very big, very strong, skillful, fast,” Graham said of St. Michaels, adding that the championship loss led to some tears for the Bruins but the mood soon changed. “By the time we went through the ceremony, got back on the bus, got back to the school … they were starting to realize that what they accomplished was pretty incredible.”

The degree of difficulty for Bodwell’s program is always high given the fact that as an international school they experience massive student turnover each year. Since 2004 it’s been Graham’s job to throw together a soccer team – finding talent is never a problem given the school’s global bent, but getting the team working as a unit is always a tough task. This year’s team featured players from Mexico, Japan, Nigeria, Zimbabwe, Korea and Brazil.

“A team like St. Michaels has probably been together since kindergarten, growing up together playing soccer – club and school – you’re looking at 12-13 years of soccer between them, and my boys, for the most part, were two-and-a-half months,” said Graham, who guided Bodwell to silver medals at the “A” level in 2004 and 2009 but had never medalled at the AA level until this year. The Bruins also claimed the North Shore AA title for the first time in school history this season.

“I think they have a lot to be proud of,” said Graham. “They just automatically gelled from almost Day 1. We did some tinkering with the lineups and trying to find out who could play which position, this and that, but these boys just love soccer. They love it to death. … Everybody accepted their roles – they were willing to come in off the bench, they were willing to start, they were willing to play in whatever position I put them in. I think their attitude was the key thing. When you get boys who are willing to work as a team, you’re going to get good results.”