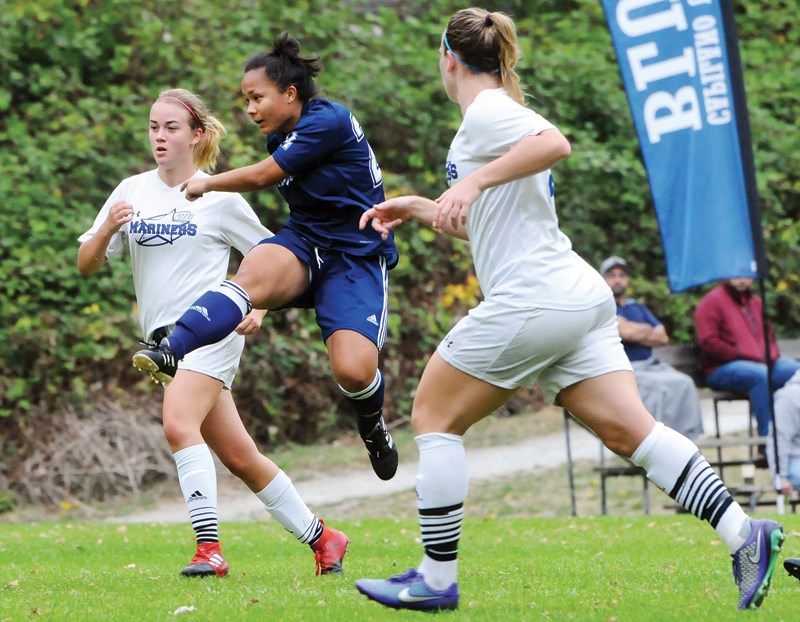 The Capilano University women’s soccer team has shown a real refuse-to-lose attitude this season, scrapping for every single point that they can get.

The flip side of that, however, is that they aren’t winning a ton of games either. The Blues have been wrapped up in ties all season long, putting up a record of one win, one loss and four draws through the first month of play in the PacWest league. Counting exhibition play, the Blues have played 11 total games and only lost once, a record that has impressed head coach Dennis Kindel even if it isn’t balanced by a big number in the win column.

“These players, the times when we’ve been down, the ‘want’ to come back and tie up games has been amazing,” he said. “That has been there, and I think that that will go a long way once we hit the playoffs.”

The Blues won bronze in provincial play last season, their first PacWest medal since claiming gold in 2007. This is Kindel’s third season as head coach and this year’s group is the most competitive that he’s had, he said, as evidenced by their record.

“The fight is there not to lose,” said Kindel. “They definitely don’t want to be beaten. They just don’t like it.”

That fight was on full display Sunday when the Blues hopped a ferry to take on the Vancouver Island Mariners. Capilano came out hard, building a 2-0 lead at halftime, but the Mariners battled back with three straight goals in the second half. But in stoppage time – Kindel guesses there wasn’t much more than 10 seconds left in the game – rookie Adrianna Babinski whipped in a corner kick with the outside of her boot that bounced through traffic and found the back of the net. Final score: a 3-3 tie.

“That felt like a win,” said Kindel. “The VIU crew just dropped to the floor in shock.”

Kindel said he would normally call it a miracle shot except he’s seen Babinski, an attacking midfielder from Coquitlam who is second in the league with four goals through six games, do it before.

“You would say that’s one-in-a-million, but she’s done it when we played Langara and I’ve seen her do it with our BCSPL team,” he said. “She’s very dangerous on the ball, has got a good shot. Whether it’s corner kicks or free kicks, that’s where most of her goals have come from.”

Kindel credited Babinski and fellow rookie Claire Ye, a defender from Coquitlam, with bringing a boost to the whole team.

“The want in those two players to make things happen has really elevated the rest of the group.”

Other leaders so far include second year captain Dominika Paige, a midfielder from Surrey, and third year players Natalie Leclerc and Jaimi MacCara.

The Blues have a big home-and-home series this week against Quest University. Capilano’s 1-1-4 record gives them seven points on the season, two ahead of Quest for the fourth and final playoff spot in the league. The two teams will play Thursday in Squamish before coming back to Capilano for a 1 p.m. kickoff on Saturday.

A pair of wins this week against Quest would all but guarantee a spot in the provincial championships for the Blues, while two losses would make it a tough task to reach the playoffs.

“This for Quest is going to be a playoff game. That’s what I’ve been telling my players – don’t think this is going to be a walk in the park, because they’re fighting for their lives,” said Kindel. “Quest is a very good group at passing the ball, they love to play out of the back and move the ball quick. They’re not going to pump it forward, so it’s really press, press, press on their side of the field and cause them some trouble. … Hopefully we take care of business. Those are the results we have to take care of.”

The fact that the Blues have only lost once all season has given them confidence heading into the home stretch, said Kindel.

“People are slowly getting more and more confident. I’m just hoping that with a win this weekend it will boost everyone. It’s not how you start, it’s how you finish, and I hope going into the next six games and into the playoffs, this will be it.”