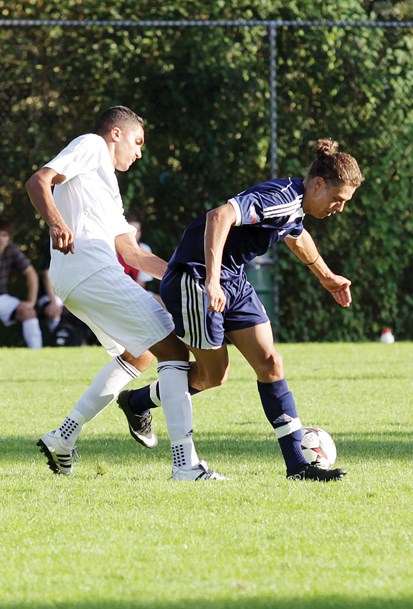 Krisitian Yli-Hietanen (right) of the Capilano Blues battles for the ball during a game earlier this season. The rookie Sutherland grad has scored goals in bunches while the Blues have completed a massive turnaround in the month of October.Kevin Hill, North Shore News

The Capilano University men’s soccer team has followed a winless September with an undefeated October so far, bringing the Blues from the brink of elimination back into the thick of the PacWest championship race.

It’s a turnaround that has calmed the nerves of longtime head coach Paul Dailly, who admitted Friday – one day after the Blues knocked off Langara to run their record to 4-0-1 in October – that while he always believed in his team, there were a few moments earlier this season when he started to doubt himself.

“You’ve got these kids in place and you brought them in for a reason thinking we were going to be a contender this year,” said Dailly. “To start the way we did, you do second guess yourself for sure.”

He had reason for concern. Last season the Blues lost their first five games then made a late-season charge but missed the playoffs by two points. Before this season Dailly vowed that his team would have a faster start and get back to their normal perch near the top of the standings, contending for provincial titles. But by the end of September their record was 0-5-1 and the playoffs seemed a distant dream. Flashbacks to 2014’s heartbreak were unavoidable. But through the slump Dailly liked what his players were giving him.

“We didn’t get the results early on – I wouldn’t say it was a slow start. The guys have been playing really well all year. We were unfortunate the first five or six games, we just didn’t get any bounces and weren’t taking our opportunities, weren’t scoring goals. It seemed like every little mistake we made hurt us…. (But) we never stopped believing in these guys. Their work rate is tremendous, they believe in each other and they’re a tight team on the field and off the field.”

The first win came Oct. 3, a 3-1 road victory over Langara. It was just what Dailly was looking for, although much later than he wanted. They haven’t lost since.

“I always really believed that if we got that first win it would relieve some pressure off of us and give them a ton of confidence,” he said. “Just give them a little taste of victory, which I thought would catapult them. Fortunately it has.”

There was no magic bullet in the turnaround, said Dailly, with no major injuries, player moves or lineup shakeups.

“It was just we got a bounce here and there, we got a couple of calls that we weren’t getting earlier in the year, and we’re taking our opportunities,” he said. “The whole team is playing better as a unit, I’ll say. We’ve always been working hard, now we’re just all on the same page. The first-year guys have got a taste of the league, they’re starting to come into their own now and perform better.”

One first-year forward who is shining particularly bright is Sutherland grad Kristian Yli-Hietanen, who scored two goals in Thursday’s 4-3 win over Langara to bring his league-leading season totals to seven goals in 11 games heading into this weekend.

“He works so hard, he deserves everything he gets,” said Dailly. “Because of his work rate he gets all these chances and he’s got tremendous speed to get in behind the back line. Right now he’s finishing as well…. He’s just a workhorse, he really is. He gives you 110 per cent every game, he’s got a nose for the net and right now he’s hot. He’s finding that net.”

Third-year St. Thomas Aquinas grad Nicolas Morello has also found his goal scoring form, putting in four markers in 10 games. Morello started the season as a forward but moved back to defence when the winning streak started and has done most of his scoring from the back.

“He’s done a tremendous job for us at right fullback and he’s scored four goals from (there),” said Dailly. “You can’t ask for anything else. He’s very good going forward and gets into dangerous areas and obviously he can finish as well.”

“Dev always gives you everything he’s got,” said Dailly. “Last night in the last three or four minutes I think he blocked three or four shots that were definitely heading on target. Winning head balls, clearing danger – he’s definitely a workhorse for us. When your captain is doing it like that it makes everyone on your team want to perform as well.”

Woolley, not normally known for his goal-scoring prowess, found the back of the net twice in a 2-1 win over Kwantlen last Sunday to earn himself PacWest Player of the Week honours.

“He’s more known as the hard defender – wins all the head balls and makes all the gritty tackles – but he’s got a good shot on him when he gets it off and he’s very, very good in the air off set pieces,” said Dailly. “He can definitely add to our attacking.”

The Blues are on the road against Quest and Vancouver Island University this weekend before returning home for their final two regular season games Oct. 24 against Langara and Oct. 25 against Douglas.

The Blues are hoping the games are actually played at their home field at Capilano – postponements and rainouts have so far limited them to only one game on their picturesque on-campus field.

“It would be nice if next week we can play two at home and take care of business on our home park,” said Dailly. “Hopefully get a few fans out to watch and just head into the playoffs on a roll here.”

The Blues now sit comfortably in fourth in the six-team PacWest league and are well on their way to clinching a berth in the four-team provincial championships, quite the feat considering their start.

“Our destiny is in our hands,” said Dailly. “We take care of business on our end and we should be fine…. We’ve seen what every team in the league has to offer and I think there’s a lot of parity in the league this year. If the guys continue the way they’re going I’m very excited to see what they can do come playoff time.”