Handsworth, Argyle, STA and Seycove senior girls all earn tickets to provincials at Sea to Sky zone championships
Feb 19, 2020 9:53 AM By: Andy Prest 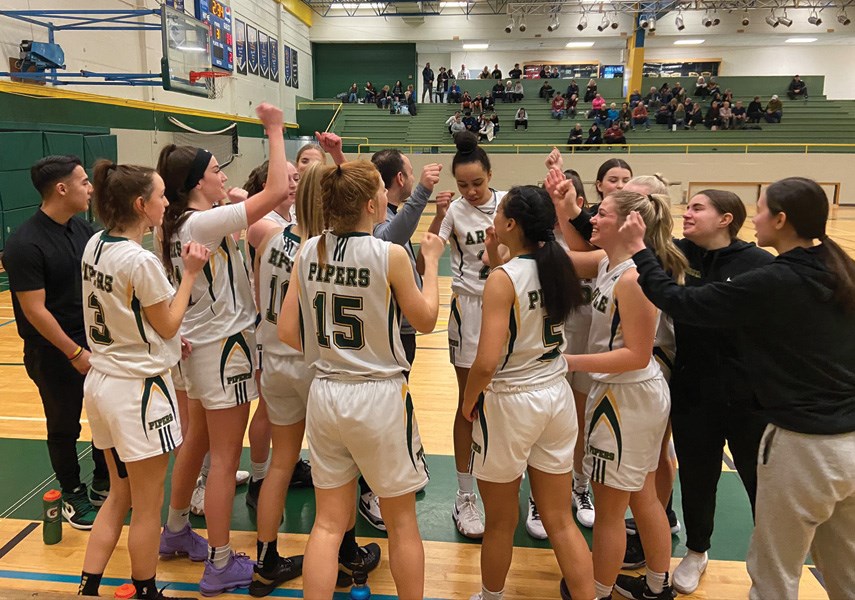 The Argyle Pipers battle to a win Friday in the Vancouver Sea to Sky senior girls AAA championship game in what will be the final game at the school’s old gym. photo Kim Jonat/Argyle

There was a new playoff format but the same old great action on the hardwood last week as North Shore high school girls basketball teams battled for berths in the provincial championship tournament.

Gone are the days of the old North Shore finals which used to determine who goes to provincials, as all the marbles are now on the line in the new Vancouver Sea to Sky zone championships. The new zone, one of nine in the province, is made up of public and independent schools from Vancouver, the North Shore, the Sunshine Coast and the Sea to Sky school district.

Those are the boundaries, now to the battles. At the senior girls AAAA level, made up of the largest schools, the Handsworth Royals came away zone champions last week, scoring a 72-53 road win over John Oliver Secondary on Thursday. Both teams earned berths in the provincial championship tournament. The win capped a run of three straight zone tournament victories in three days for the Royals, including a 48-33 win over West Vancouver in the zone semifinals.

At the senior girls AAA level the Argyle Pipers said goodbye to their old gym while saying hello to the brand new zone championship banner. In what will be the last competitive high school basketball game played at the Argyle gym before it is replaced by a rebuilt school next fall, the Pipers rocked Magee Secondary 90-37 to win the Sea to Sky championship final. Again, both teams earned berths in the provincial championships. Gabbie Francis was named the tournament MVP while her Argyle teammates Hope Pearmain and Ella Mellinghaus earned spots on the tournament all-star team.

At the highly competitive senior girls AA level, St. Thomas Aquinas was the top North Shore school, finishing third in the zone championships. Britannia topped York House 82-71 in the AA zone final, while STA defeated Notre Dame 78-45 in the third place game. Seycove also scored a big win, defeating Collingwood 59-41 in the fifth-place game. As the largest and most competitive AA zone in the province, Sea to Sky was awarded five provincial berths, meaning STA and Seycove will both advance to the B.C. AA championships running Feb. 26-29 at Langley Events Centre. STA’s Gemma Cutler and Jessica Clarke and Seycove’s Sofia Bergman were named to the tournament all-star team.

The Sea to Sky zone also held its first ever junior girls championship, with Winston Churchill topping Seycove 79-22 in the championship final. Argyle finished third with a 53-44 win over Notre Dame in the consolation final. Seycove and Churchill advanced to the junior girls provincial championship tournament.