Woodfibre LNG has delayed its plans for a natural gas plant and export terminal on Howe Sound.
Jul 12, 2015 2:00 AM By: Brent Richter 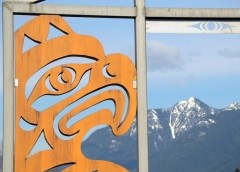 Woodfibre LNG has delayed its plans for a natural gas plant and export terminal on Howe Sound.

The moves comes in response to a list of 25 conditions put forward by the Squamish Nation that highlight environmental, cultural or safety concerns in the current application that the Squamish consider deal-breakers.

The First Nation has been running its own environmental assessment parallel to the provincial one.

Woodfibre announced last week that it has sought and received a temporary suspension of its environmental assessment review period, which was scheduled to come to an end on Monday, July 13.

Aaron Bruce, a Squamish Nation member and lawyer representing the band, said the nation has no intention of approving the deal unless the company can meet the conditions, particularly the Top 5. Among them: Providing better environmental assurances that the plant’s cooling system won’t damage herring stocks with its intake pipe or chlorinated outflow.

“The Squamish just wasn’t satisfied with the evidence saying there won’t be any significant impacts on the organisms,” Bruce said.

Fortis B.C., which is planning the natural gas pipeline to the proposed plant, also must find a new route that won’t disturb the Skwelwil’em Wildlife Management Area at the eastern side of the of the Squamish River mouth.

The plant itself is slated to be built on the site of a former Squamish village, which was later the home of a pulp mill. The nation won’t allow the plant to go ahead unless Woodfibre can find a way to allow Squamish members to hunt and fish on the traditional territory around the plant, Bruce said.

The proponents also must find a new location for the compression plant, which members living on reserve near the District of Squamish worry would be a threat in the event of an explosion. Woodfibre must establish a bond or trust that  guarantees compensation for personal or financial losses in the event of a disaster.

While the Squamish Nation does not have an explicit veto on the project, the band will be relying on case law established by Supreme Court of Canada in the Tsilhqot’in Nation vs. British Columbia, which found the First Nation had land title to its traditional territory.

“We’ve said to the proponents and to the province we need all 25 met or there’s no project,” Bruce said. “(We) have a very strong claim to that area. It doesn’t get much more Squamish than the mouth of the Squamish River.”