A local woman is probably counting herself thankful after being rescued from a life-threatening injury in the backcountry by North Shore Rescue volunteers over the Thanksgiving weekend. The team got the call at 4 p.m.
Oct 14, 2015 10:36 AM By: Brent Richter 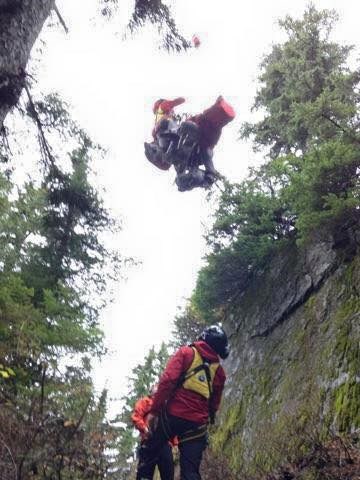 A local woman is probably counting herself thankful after being rescued from a life-threatening injury in the backcountry by North Shore Rescue volunteers over the Thanksgiving weekend.

The team got the call at 4 p.m. Sunday after the 30-year-old hiker fell head-first while on Goat Mountain, due north of Grouse Mountain.

“It’s very steep and rocky on that side and she actually fell forward and tumbled 15 feet on the steep rock,” said Mike Danks, North Shore Rescue team leader.

The woman received significant facial trauma and a severe hematoma or swelling on her throat that threatened to block her airway.

“If her airway continued to swell, she was at very high risk of not surviving. She was with two physicians. They were talking about potentially doing a tracheotomy on her if they had to but they didn’t have any medical equipment,” Danks said. “For us, this was an urgent medical rescue.”

The team dispatched a helicopter with a paramedic on board as well as a ground team, which was assisted to the area by Grouse Mountain staff.

Luckily, the victim was close to one of North Shore Rescue’s emergency caches in the backcountry, which gave them quick access to a spine board and oxygen.

“The cache really paid off on this one,” Danks said. “She was closely watched as to whether she needed to be intubated or not just because of her airway being compromised.

With little light remaining, the team prepared the woman for long-line helicopter rescue and airlifted her to a waiting ambulance at the Capilano gate search-and-rescue station.

The all-volunteer team has been run off their feet with a record number of call-outs this year, but the urgent nature of the call meant almost two dozen members dropped their Thanksgiving dinner plans to help out, Danks said.

“We had an amazing response. We had 22 people for this call. We had people at the base of Grouse within 10 minutes of being notified,” he said. “We basically got all of our rescuers out just as darkness hit. . . . It was good for everyone to get back to their dinner as well.”