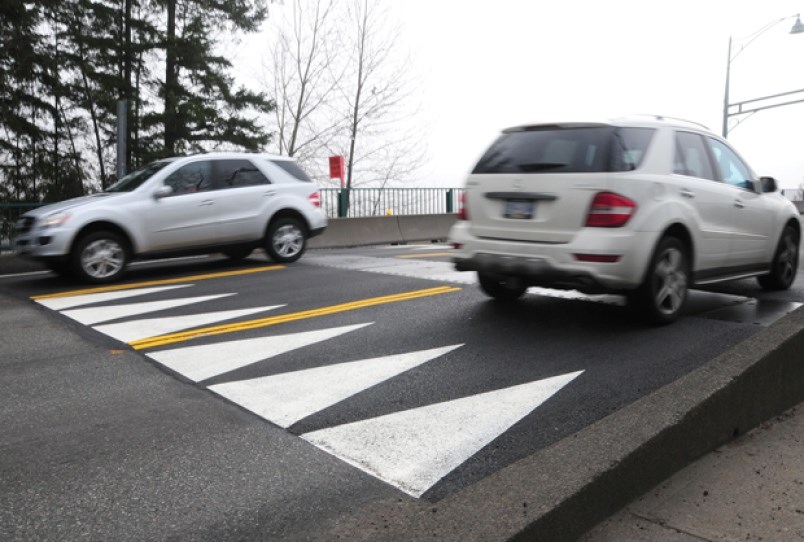 There could be bumpier roads ahead for West Vancouver.

District of West Vancouver council voted unanimously Monday night to repeal a 30-year-old ban on speed bumps on local roads and plans are already in place for the district’s first speed humps as a means to slow down drivers on some streets.

Council passed the original policy in 1987, though no one in the engineering department could remember why the council of the day wanted a ban on speed bumps in the first place. District staff theorized it may have been over liability and concerns about low-clearance vehicles, cyclists or emergency vehicles.

But the kinder, gentler speed humps, raised crosswalks and speed cushions of today are just as effective at slowing down traffic, according to staff, without being so jarring.

District staff started consulting with the West Vancouver police and fire departments, Blue Bus, and community groups like HUB, as well as the district’s school traffic safety advisory committee in 2017 and found support for the plan.

Under the district’s new policy, anyone can request a speed hump for their street, and the district will vet proposals based on safety criteria. Arterial roads like Marine Drive and Taylor Way, however, won’t be eligible.

Six months after they’re installed, staff will measure traffic data and speeds to see if they’ve had the desired effect, or if they’re simply encouraging people with lead feet to travel an alternate route down nearby streets.

The change was sorely needed, according to residents on Eagleridge. “I can tell you there isn’t a week that goes by that there isn’t a shocking near-miss on that street. It is a dangerous street of excessive speed. It has been for as long as we’ve lived there,” said Kathryn Lester. “It’s hazardous. It’s a risk, and people are actually really frightened. They’re scared to cross the street at Falcon.”

Council members agreed the change was a long time coming and in line with their goal of making streets safer and more comfortable for cyclists and pedestrians.

“People don’t realize how fast they’re going when they’re in their car. It’s too comfortable. As a pedestrian, you do feel the speed and I think these are progressive ways to have traffic calming. I know 50 per cent of the community wants to go faster and 50 per cent of the community wants to slow traffic down. I tend to fall on the side of ‘slow traffic down,’” said Coun. Mary-Ann Booth.

Coun. Nora Gambioli predicted requests for speed humps would come fast and furious. “The only problem for the engineering department will be how to manage all these requests because once word gets out, every neighbourhood is going to want speed humps and raised crosswalks,” she said. “I wish them luck.”