The Fraser Institute’s annual report card on B.C. elementary schools is out and for the second year in a row, a West Vancouver public school has received a perfect score.
May 6, 2015 9:45 AM By: Tereza Verenca 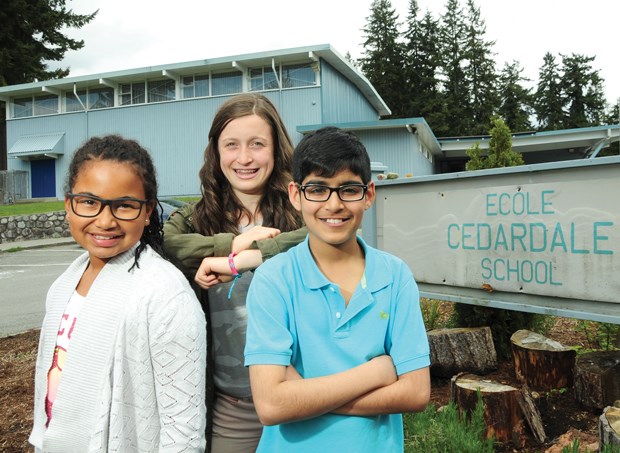 The Fraser Institute’s annual report card on B.C. elementary schools is out and for the second year in a row, a West Vancouver public school has received a perfect score.

Out of the 978 schools included in the report, Ecole Cedardale earned a 10 out of 10, ranking No. 1 with 15 other schools across B.C. Cedardale is the only public school in the province with a top-ranked spot.

“It’s a good news story,” said Cedardale principal Michelle LaBounty. “We have a great community; we have a great staff and are very well supported. Because of that, our kids are able to achieve at their best.”

The elementary report card, which was introduced by the think tank in 2003, rates public and private elementary schools based on 10 academic indicators derived from the Foundation Skills Assessments administered by the province.

Students at the Grade 4 and Grade 7 level are tested on an annual basis in the subjects of reading, writing and numeracy.

Cedardale, which received a score of 8.1 in 2012 and a 10 in 2013, surpassed the overall provincial average in each of the three subjects.

“We have the ability to be innovative, so we’re always looking at ways to meet our learner’s needs,” she said. “It’s about balance and helping our kids find it.”

But for the president of the West Vancouver Teachers’ Association, the provincial assessments are not a true reflection of the kind of work being done in schools.

“A kid might not do well on a particular day,” said Rob Millard. “So we don’t take any stock in the FSA results. Our teachers are doing an excellent job in all our schools.”

Across B.C., 50 elementary schools showed an upward trend when it came to their academic performance over the last five years, while private schools like West Vancouver’s Mulgrave School dominated the top rankings.