Two-term West Vancouver Mayor Michael Smith is retiring from municipal politics. “I just think seven years is enough,” he said. “There comes a time when it’s time to go, so I guess it’s my time to go.
Sep 12, 2018 2:27 PM By: Jeremy Shepherd 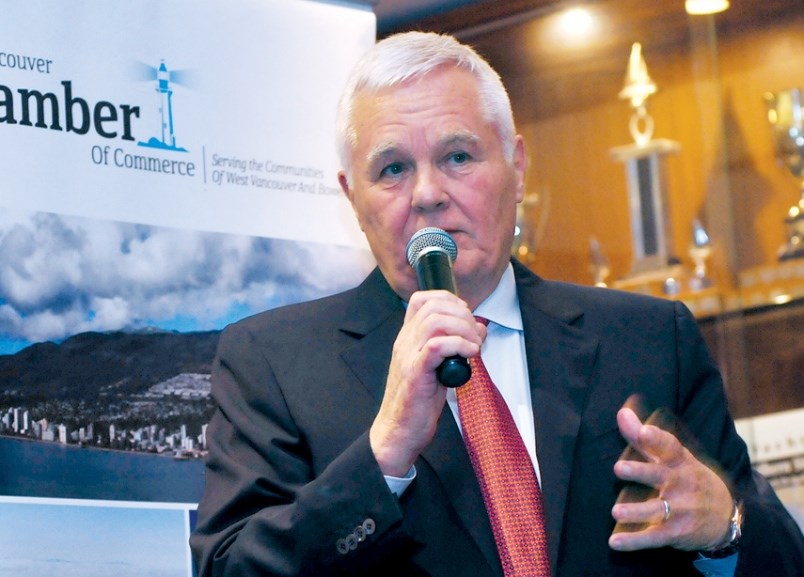 “I just think seven years is enough,” he said. “There comes a time when it’s time to go, so I guess it’s my time to go.”

Weary of council meetings and resistance to what he deemed necessary change, Smith announced his departure Wednesday, capping a political career that included dust-ups over monster house regulations and the passage of an interim tree bylaw as well as one of Smith’s proudest moments: the approval of Grosvenor’s Ambleside project.

Describing the 1300 block of Marine Drive as a shantytown and noting real estate agents referred to the area as the Gaza Strip in 2013, Smith championed the 98-unit, seven- and six-storey project.

"I don't see businesses lining up to invest in Ambleside,” he said at the time. “We finally have a quality developer . . . we want to send him out of this council chamber with their tail between their legs."

Much of the debate centred on council’s decision to sell the land to Grosvenor.

“I get frustrated with people that opposed the Grosvenor project. They don’t realize there’s a cause and effect in business,” Smith said.

Besides kickstarting redevelopment in Ambleside, the land sale facilitated the building of the new police department building and municipal hall, Smith noted. The deal also allowed the district to spend $16 million for land and buildings at 2195 Gordon Avenue.

The deal gives West Vancouver a chance to build “the type of housing that we need, including a very great amount of rental housing,” he noted.

In backing Park Royal’s 203-unit two-tower proposal for 752 Marine Drive at an April council meeting, Smith noted the municipality had approved 91 rental units since the 1970s. The meeting ended with Smith warning the gallery that rejecting the project might lead to a community of: “moaners, whiners and retirees that are happy just with no life.”

Asked what advice he wishes he’d received before becoming mayor, Smith replied: “I should’ve taken a course on tolerance and patience.”

“I’m not the most patient person in the world and council meetings have basically beaten me,” he said. “If you can’t say whether you’re for or against a motion in 10 minutes, you’ve clearly got a public speaking problem.”

Smith suggested his frustration was exacerbated by a change in council procedures.

“For 100 years the District of West Vancouver started their meetings at 7 p.m. and usually finished around 9 p.m.,” he said. “Now we have to start at 6 p.m. because the councillors in their wisdom or lack thereof – depending on your point of view – voted down our council procedure bylaws.”

That had the effect of often lengthening council meetings.

“I think a whole reset on council – which I’ve started with myself – will be really beneficial for the community.”

“We need rental housing options and townhouses and multi-family units in Ambleside and Dundarave,” he said.

The new mayor and council will inherit an approximately $23 million surplus, Smith said.

“That speaks well for the stewardship that I’ve done over the finances of the municipality,” he said.

Following a unanimous vote that gave council a 36 per cent pay hike in 2012, Smith donated his $9,085 raise to the West Vancouver Foundation.

"I haven't seen anything to prove that the more you pay, the better candidates you get," he said at the time.

Smith blasted Metro Vancouver board members earlier this year, calling their decision to vote themselves a pay raise and a retroactive retirement allowance a “total disgrace,” adding, “if I’d been there, they would have had to call the riot police.”

The pay raise and retirement allowance were later rescinded.

“I single-handedly beat back that half a million dollar boondoggle for the retirement allowance,” he said Wednesday.

“I think I have made a difference in advancing West Van’s position that we pay a disproportionate amount of fees to TransLink – as we do to Metro Vancouver – and yet the North Shore is the only part of Metro Vancouver that’s had no new bridge crossings and no rapid transit plan.”

Discussing his accomplishments in office, Smith pointed to an uptick in the morale of the West Vancouver Police Department since 2014.

“The vast majority of the department were unhappy with the management team and there was a lot of complaints about bullying and cliques and sexism . . . we now have an entirely new management team.”

But while Smith is leaving council chambers, he plans to remain part of the community.

“I’ll stay in West Van,” he said. “I grew up here, my kids grew up here and my grandkids are growing up here.”

Couns. Mary-Ann Booth and Christine Cassidy as well as former mayor Mark Sager and Nolan Strong are currently running to be West Vancouver’s next mayor.