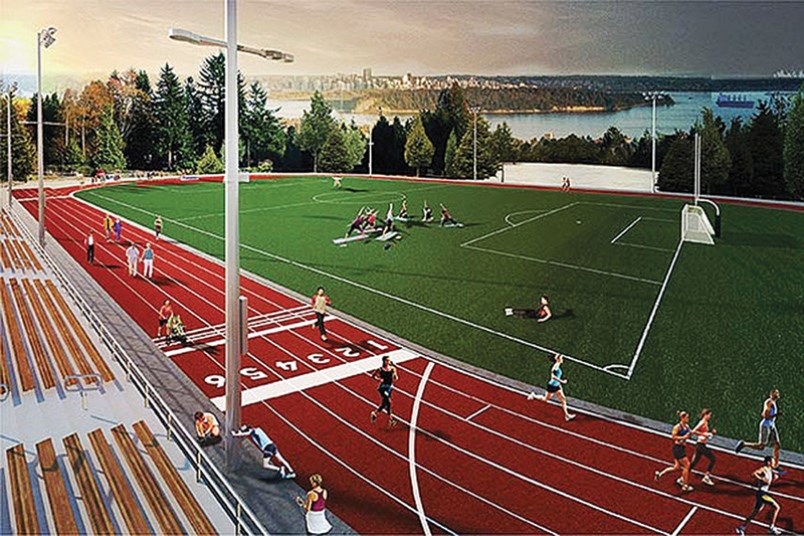 The fundraising campaign for a new running track and artificial turf field in West Vancouver took a big leap forward Monday with District of West Vancouver council pledging $2 million towards the project.

The plan, which calls for a massive renovation and upgrade of the deteriorated sports facilities at West Vancouver Secondary, comes with an estimated price tag of $4.9 million. The upgrade would include a new rubberized five-lane track, all-weather turf field, lighting and accessible washrooms.

“This project will benefit the entire community,” stated Mayor Mary-Ann Booth in a release. “It will provide a vital recreation amenity for our students and sports clubs, and it will also be a place for residents to exercise, participate, play and train in a safe, central and accessible location.”

The West Vancouver Place for Sport campaign was started by a small group of community volunteers in 2015 with the ambitious goal of securing more than $5 million in public and private funding for a much-needed renovation of the badly damaged track and surrounding facilities. Initial pledges from community partners, including the West Vancouver Community Foundation, the West Vancouver school district, the District of West Vancouver and West Vancouver Football Club, pushed the fundraising total to close to $1 million, but the campaign remained stalled there.

This week’s commitment from the district pushed the total to around $3 million, meaning that the campaign now needs approximately $1.9 million more to get over the finish line. The district’s funding announcement was greeted by excited cheers in council chambers Monday night.

“It is often said that when the world comes together, it is through sport,” stated WVPFS spokesman Geoff Jopson in a release. “The volunteer fundraising committee applauds the significant contribution that council has made to this exciting project, and we are now confident that the generosity of our citizens will help us to make the Place for Sport a reality.”