A rising tide is set to sweep West Vancouver’s waterfront, and at least one painter is worried art will be lost in the wave.
Mar 25, 2016 8:00 AM By: Jeremy Shepherd 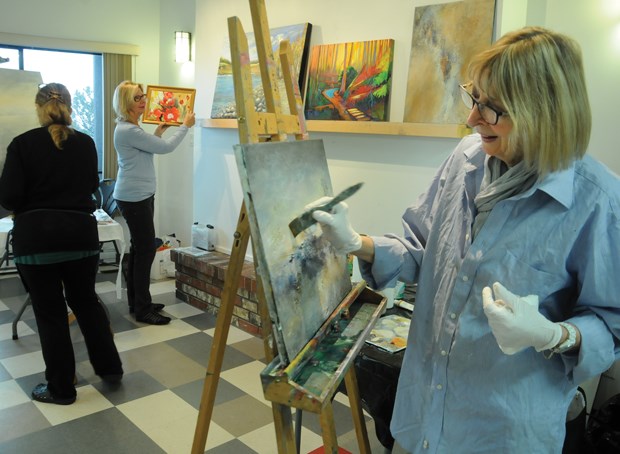 A rising tide is set to sweep West Vancouver’s waterfront, and at least one painter is worried art will be lost in the wave.

The plan for Ambleside’s waterfront means creating open space through the demolition of the Music Box, Silk Purse, and Lawson Creek Studios – much to the chagrin of North Shore Artists’ Guild president Jilly Watson.

“We’re a bit nervous at the moment,” Watson said of the planned destruction of Lawson Creek Studios. “We’re just trying to let the municipality know that the artist community really doesn’t want that building to come down.”

After years of serving as a tranquil space for painters, woodcarvers and theatre programs, Lawson Creek Studios has become outdated and vulnerable to ocean swells, according to District of West Vancouver spokesman Jeff McDonald.

“Those structures are extremely old and cost a lot of money to maintain. They’re not really serving a useful purpose for many of the groups that use them,” McDonald said.

Surging storms and king tides have also flooded the studio in recent years, further damaging the structure and making it uninhabitable for weeks at a time, according to McDonald.

Unlike the Silk Purse Studio and the Music Box, which each faced flooding following a 2012 storm, Lawson Creek Studios has been comparatively dry, according to Watson.

“It’s not in danger of being flooded out,” she said.

However, McDonald is adamant the artists won’t be left en plein air.

“We recognize that there’s angst and concern among groups … who have been using that space for a long time,” he said. “I think every effort will be made to find space to accommodate groups like the North Shore Artists’ Guild.”

The waterfront concept plan includes a new arts plaza at the foot of 14th Street, but Watson isn’t sure the 325-member artists guild will find a home there.

“If they don’t pull it down until everything is in place we’d be a bit happier about it,” she said. “We’re a bit worried this building’s going to come down and suddenly we’re going to be in a situation where we have to find a private place, which will be hard for us.”

While the waterfront may be less hospitable for artists, the habitat could become more welcoming for salmon, according to McDonald.
Watson disagreed.

“It’s such a small footprint, it’s not really going to make much difference to the fish,” she said.

Lawson Creek runs underground between Marine Drive and Bellevue Avenue, Barker explained. However, water could be diverted out of the culvert into a pathway that would run through parkland to the west of Navvy Jack House, where it would curl around the heritage house and rejoin a nearby estuary.

Barker is excited about the plan but reluctant to get into a debate about the future of Lawson Creek Studios.

“We don’t want to be used as the reason that Lawson Creek Studio came down because it’s not necessary to do it for streamkeeper work,” he said.
Bringing the creek west of the historic Navvy Jack House should make for a longer path, creating more habitat for the fish. Salmon will hopefully be lured by the water’s near frigid temperature, according to Barker.

“The chum seem to like that cooler water,” he said.

The creek path would be augmented by native vegetation, split cedar rail fencing and crushed gravel walkways, according to Barker.

The new plan is set to be discussed in council chambers in early June. The concept includes closing Argyle Avenue to cars, as well as consolidating two boat ramps into one ramp that would be inaccessible to motor boats on trailers. The district is on the hunt for a new spot where motor boats could be launched.