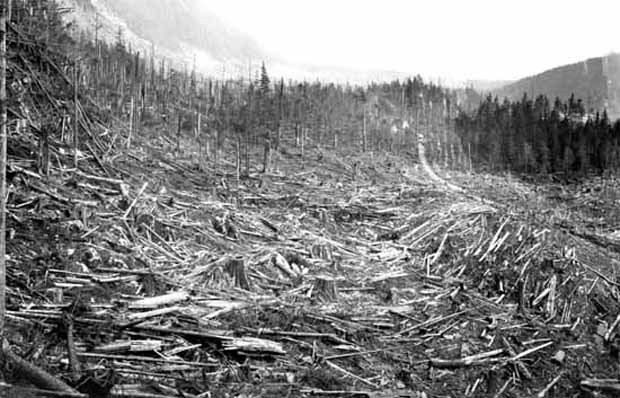 If a tree falls in West Vancouver … its diameter better be slimmer than 75 centimetres.

In an attempt to quiet the chainsaws, West Vancouver council unanimously passed an interim bylaw to protect trees on private property Monday night.

The bylaw, scheduled to become law Wednesday evening, was both praised as overdue and criticized as overzealous during a jam-packed four-hour council meeting.

Most West Vancouver lots were clear cut in the 1940s and ‘50s, pointed out Brent Wolverton, who requested freedom for homeowners to cut down a few trees each year.

“Let’s be clear, all the trees in West Vancouver are mature landscaping, they’re not old growth,” he said.

For the past 60 years, people have been cutting down big trees and replacing them with smaller trees, he said.

The new bylaw will prevent the cutting of large trees on private property unless an arborist deems them hazards.

Wolverton was one of a few residents who warned that arborists can be less than prescient in predicting which trees pose safety hazards.

“Replacement trees do not replace the ecology associated with a mature or old growth tree,” he said.

Part of the district’s problem with trees has been the commodification of West Vancouver homes in recent years, according to Coun. Bill Soprovich, who decried the mentality of: “Get as much money as they can, to heck with the neighbours.”

Soprovich supported the bylaw, but not without misgivings.

The bylaw will only protect trees that are 75 cm in diameter or larger, he cautioned.

“The rest will be gone.”

Residents who violate the bylaw can be fined as much as $1,000, an amount Coun. Nora Gambioli termed “a joke.”

Some tree-huggers in the gallery were hoping the diameter of protected trees could be reduced to something they could get their arms around, Gambioli noted.

“Reading into staff’s mind, the reason that the 75 cm number was chosen is because, quite frankly, they didn’t think they would have a majority of councillors … who would support anything smaller.”

To illustrate her point, Gambioli put forth an amendment that would have protected trees as small as 75 cm in circumference – approximately one-third the size put forth by staff.

Mayor Michael Smith was displeased with the suggestion. “To have council start making bylaws on the fly, is to me just a horrific precedent,” he said.

Facing trepidation from staff and opposition from colleagues on council, Gambioli withdrew her amendment.

The bylaw covers most of West Vancouver with the exception of the Upper Lands – much to the chagrin of Sterling Lorence.

Both the 6,000 acres above the highway and heritage area Lower Caulfeild are exempt from the bylaw because they have their own regulations governing tree cutting.

The bylaw won an endorsement from former councillor Rod Day – albeit with one caveat. “I wish council would just go ahead and do this and take the word ‘interim’ out of it,” he said, requesting the bylaw become permanent.

Council took the unusual step of passing the interim bylaw because of the urgency of the situation, according to Coun. Michael Lewis.

“The reason this has been accelerated is because we saw the chainsaws coming out,” he said.

Coun. Mary-Ann Booth agreed. “As soon as we started talking about a tree bylaw, people were going to start cutting trees,” she said.

The mayor tried to soothe residents who were fearful the bylaw infringed on the rights of property owners.

“If anybody thinks that this bylaw is going to significantly negatively impact their enjoyment of their homes, they should take a couple of Aspirins and they’ll feel better in the morning. This is a very soft entry,” Smith said.

Froome was one of a few speakers who advocated that architecture to be tailored to the landscape and not the other way around.

“By having no bylaws in place, we’re allowing our communities in West Vancouver to be developed as investment portfolios, not neighbourhoods,” he said. “It’s time to embrace our history of architecture and start building within the trees again.”

The interim bylaw also shields Garry oaks and arbutus trees with a diameter of 20 cm or greater.

Staff is scheduled to report back to council with plans on a permanent bylaw Nov. 15.