This story has been updated since posting to include responses from Councillor Craig Cameron and City of North Vancouver Mayor Linda Buchanan.
Aug 1, 2019 3:53 PM By: Brent Richter,Jane Seyd 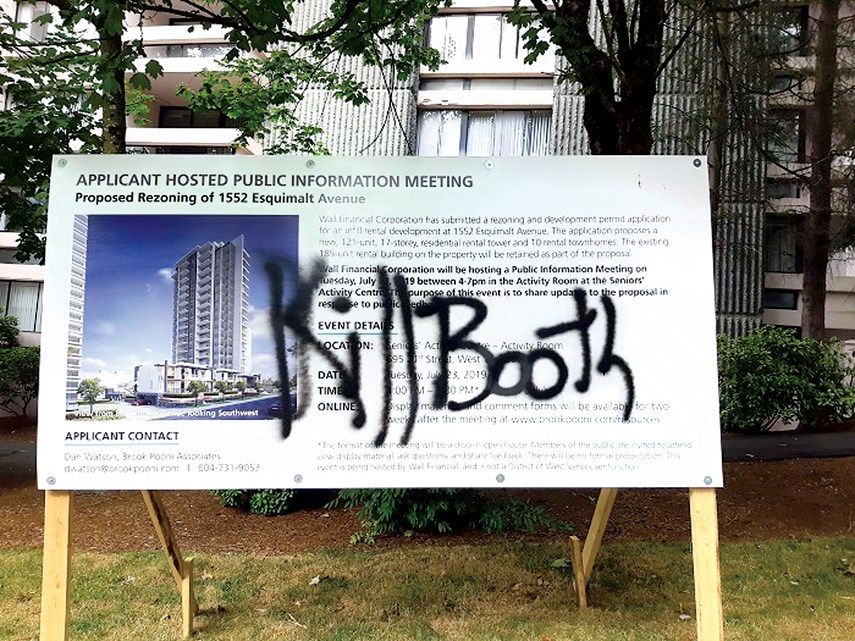 This story has been updated since posting to include responses from Councillor Craig Cameron and City of North Vancouver Mayor Linda Buchanan.

Residents first noticed the graffiti at 1552 Esquimalt Ave. on July 31 and called police. The three signboards on the north, south and east side of the property, which declare intention to seek rezoning for a new tower at the site, were emblazoned with the messages “Kill Booth” and “Kill council.”

“There’s a big difference between defacing property and uttering threats ­- in this case, death threats towards a person or group of people. We take these very seriously,” said Const. Kevin Goodmurphy, West Vancouver police spokesman.

The messages were removed immediately, but now police are looking for the suspects.

“We’ve since canvassed the area for any surveillance footage or any witnesses that would have seen anyone responsible, or anyone that’s out of place in the area,” Goodmurphy said. “They’re knocking on doors, getting ahold of apartment managers in that area.”

Investigators believe that the incident took place between July 30 at 3 p.m. and July 31 at 7 a.m.

“Everyone here is a little bit emotional. We’re saddened by these threats, which are quite extreme. There is no place for threats like this. It’s just unacceptable,” she said. “Against anybody, whether it’s an elected official or a regular citizen in our community. It’s a serious, an extreme thing. … Think about if you saw your name up against that word.”

Councillor Craig Cameron said he doesn’t feel scared for his safety but sees the graffiti as “indicative of a degradation of our civic discourse and I’m very concerned about that.”

Cameron said he was “disappointed and a bit shocked” when he heard what had happened but wasn’t entirely surprised.

Political rhetoric is West Vancouver has become “more and more vitriolic and toxic and negative and personal, very personal” since the last election, said Cameron.

Cameron said he doesn’t think those who have been speaking out politically against the mayor and council are behind the spray painting, but “what they’ve managed to create is an atmosphere where incidents like this are more likely to happen,” he said.

“If you are constantly deriding local elected officials, that’s not falling on deaf ears. People are listening to that. Some people who perhaps have poor judgment are going to act on it . . . It stems from disrespect and incivility.”

Cameron said he doesn’t think anyone should just dismiss the threats.

“If we don’t learn to talk more civilly and debate our differences in a more rational manner you worry about what could happen next,” he said.

He also worried that the toxic tone of debate will lead good people to refuse to see public office.

City of North Vancouver Mayor Linda Buchanan also spoke out, issuing a statement saying “attacks of this kind are unacceptable, they are criminal, and I support the efforts of police agencies to bring the perpetrators to justice.”

Buchanan said she’s watched the tone of political discourse in West Vancouver change “from constructive to highly toxic” over the last 10 months.

“I am not prepared to stand by and let this kind of politics undermine our democracy – nor am I willing to see a situation in which a second woman leader, or any leader for that matter, is targeted,” she wrote.

Booth declined to comment directly on the threats, citing the police investigation, but expressed thanks for supportive calls and emails she’s received.

“It is business as usual at municipal hall,” she added in an emailed statement.

Goodmurphy said the spray painted threats appear to be an isolated incident and that no other direct threats have been made. Police have spoken with all members of council and the mayor and have done a threat assessment.

“We’re covering all our bases and making sure everybody is as safe as we can make them while this investigation is taking place,” he said.

It’s been a tumultuous early term of council in West Vancouver, Powers acknowledged, but she said the tenor of public discourse has been declining and abuse towards public officials has been escalating for some time, all over.

“I am constantly surprised,” she said. “The tone of society has been changing really rapidly but it’s not just in West Vancouver.”

Anyone with information about the threats is urged to contact police at 604-925-7300. If they wish to remain anonymous, they may contact Crime Stoppers at 1-800-222-TIPS or solvecrime.ca.