A mysterious underwater disease that has caused a massive die-off of sunflower sea stars in the waters of Howe Sound appears to be taking hold in another starfish species - the common purple or ochre starfish found in most local tide pools.
May 23, 2014 12:00 AM By: Jane Seyd 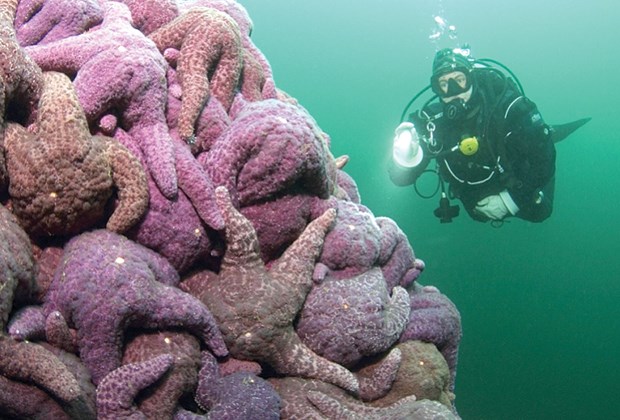 A mysterious underwater disease that has caused a massive die-off of sunflower sea stars in the waters of Howe Sound appears to be taking hold in another starfish species - the common purple or ochre starfish found in most local tide pools.

The news is disconcerting for scientists who have studied the starfish "wasting syndrome," which appears to be caused by some kind of waterborne virus or bacteria.

"We thought it had stopped," said Jessica Schultz, a research co-ordinator for the Howe Sound Research and Conservation Group at the Vancouver Aquarium. But in the last few weeks, divers have been seeing sick starfish again, she said.

Divers at Whytecliff Park first reported the problem to aquarium scientists last fall, when they noticed large populations of previously healthy starfish seeming to liquefy on the spot. The die-off spread quickly, with thousands of the multiarmed sea stars disappearing from waters off Bowen, Hutt and Popham islands.

The phenomenon has been tracked in pockets up and down the West Coast, as far south as California.

The wasting syndrome causes a particularly swift and nasty death for the sea stars, in which their limbs fall off, their body wall ruptures and their organs drift out into the ocean.

The process has been happening so quickly that it has been difficult for researchers to get samples - by the time a starfish in trouble has been spotted, it has frequently turned to goo.

Adult sunflower sea stars in the affected areas of Howe Sound have already died, said Schultz. But baby starfish of the species seem to be surviving. "So that's good news for them," she said.

But purple sea stars in areas of Howe Sound - such as near Boyer Island - are now succumbing to the syndrome in larger numbers. Researchers are still waiting for official word on a cause of the wasting syndrome. "It looks like it's probably a virus," said Schultz.

One theory is that warmer-than-usual ocean temperatures may have played a role in its spread. So far, the syndrome appears to only be affecting sea stars.

"There's not many things that eat sea stars except other sea stars," said Schultz. But even that can change the ecological balance in the area. Green sea urchins, a common prey of sea stars, can now be found in especially large numbers, said Schultz - likely because of a lack of predators.

If the syndrome continues, "we might see other ecological shifts as well," she said.

Both sunflower and ochre sea stars are considered dominant species in their ecosystems.

Researchers at the aquarium are still interested in information divers can provide on local starfish populations, said Schultz - whether they're spotting healthy or sick ones.