Two North Vancouver parks that were closed after a bear bit a 10-year-old girl on the leg last week have reopened to the public with warnings to be cautious.
Jul 30, 2020 6:18 PM By: Jane Seyd 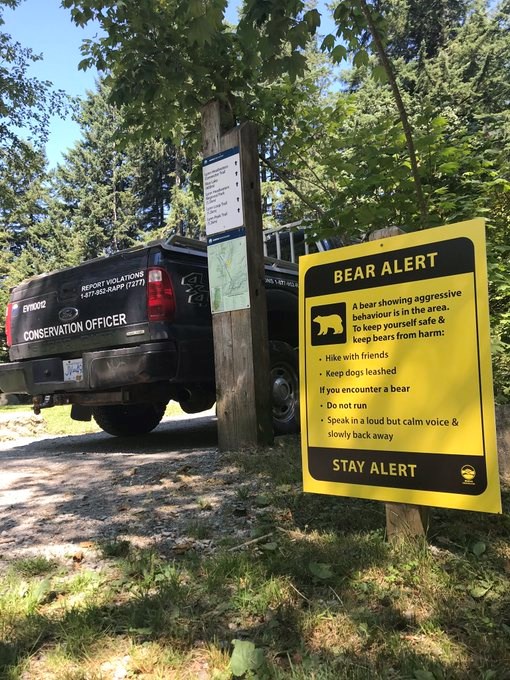 Two North Vancouver parks that were closed after a bear bit a 10-year-old girl on the leg last week have reopened to the public with warnings to be cautious.

Conservation officers who had been combing two North Vancouver parks for signs of a bear that bit a 10-year-old girl last Friday have called off their search without finding the bear.

Conservation officers spent much of the week looking for the young bear in both the Lower Seymour Conservation Reserve and Lynn Headwaters Regional Park – which were both closed to the public during the search – but didn’t spot the bear.

The young bruin also failed to take the bait in live traps set for it.

Conservation officers have called off the search for now, but plan to continue using traps in the area.

Conservation officers are asking the public not to carry any food into the parks, and keep dogs on a leash to cut down on the chance of a close encounter with a bear.

They are also advising any sightings of bears be reported to the conservation office on 1-877-952-7277.

People who plan on hiking in the area are also advised to educate themselves about bear behaviour by visiting the website of WildsafeBC.

The incident that prompted the parks closure happened on the afternoon of July 24 as a family of two children and a parent was walking on the trail around Rice Lake, said Inspector Murray Smith of the Conservation Officer Service.

Smith said the family stopped when they saw the bear on the trail and the adult and another passerby tried to scare it away by making noise. But instead of running away, the bear kept approaching and bit the girl on the leg, puncturing her skin.

The girl was taken to hospital for treatment and was released.

Conservation officers said it was likely bear had grown accustomed to humans as sources of food.

Bear advocates characterized the bite as more of a defensive reaction, likely caused by the family panicking when the bear came too close.