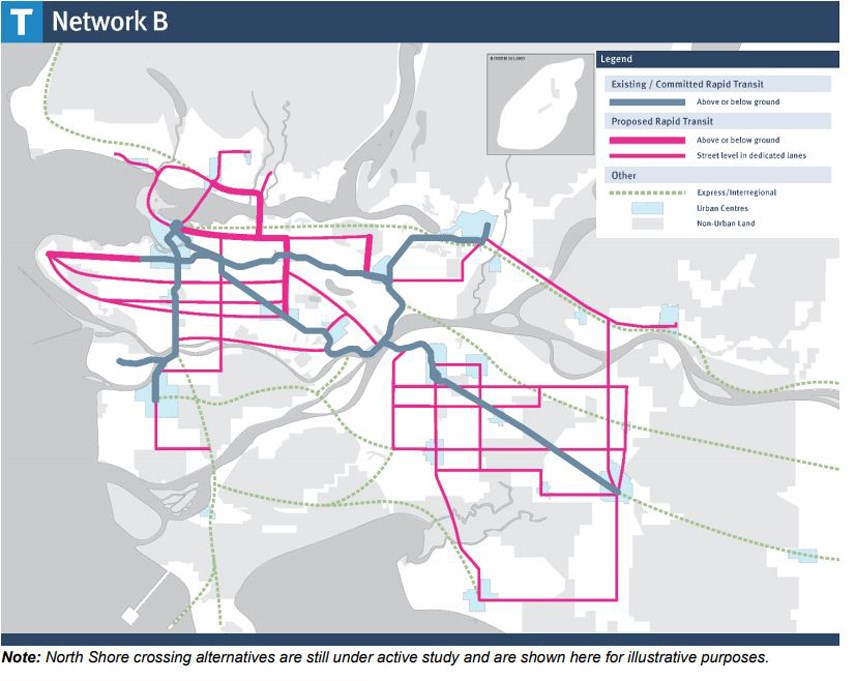 A hypothetical map shows a SkyTrain extension from Burnaby to North Vancouver. TransLink is seeking feedback on future priorities for our transportation network.TransLink

If North Shore residents are dazzled by the thought of a SkyTrain ride across Burrard Inlet or satisfied with more rapid bus options, now’s the time to make it known.

TransLink has started public consultations for its next phase of transit improvements under the Transport 2050 plan.

Both involve tradeoffs across the Lower Mainland. Network A would provide faster commutes but reach fewer neighbourhoods. Network B would take less time to bring online but require the conversion of some existing road space to exclusive use by transit.

Both maps envision a SkyTrain connection over the Second Narrows, although the maps are there purely for illustrative purposes. Actual routes and technology for the North Shore will be subject to deeper analysis that follows on the Burrard Inlet Rapid Transit study completed last year.

“It's clear that TransLink is taking the results of the BIRT study really seriously and that's really good news for the North Shore,” said North Vancouver-Lonsdale NDP MLA Bowinn Ma. “I am supportive of a rapid transit solution to the North Shore. However that turns out, I want it to work for people here and I want it to work for our communities, which means that we need to allow TransLink to do some of that network analysis work, and the public engagement work that they're doing right now.”

Ma is encouraging everyone to fill out the survey, which will help form the draft report on transit expansion plans later this year.

SFU planning and transportation prof Stephan Nieweler said he believes there is already more than enough data on population and employment density on the North Shore to justify, at least, an LRT line.

“I think this is great that I see this on the map. I hope there's a bit of momentum here that this will legitimize the North Shore for the first time on a TransLink document,” he said. “Since the '70s, nobody's talked about rail to the North Shore. ... I think they did some homework and maybe realize now.”

But Nieweler added, the North Shore should come ahead of other planned rapid transit projects in Langley or a subway to UBC.

“It’s about setting the stage for the kind of future that our children and our grandchildren will grow up in. And local governments will need to begin the work of building complete communities that put people first right now,” Ma said.

Ma said she has been impressed with the discussion about transportation on the North Shore has evolved. When she first ran for office, all anyone wanted to discuss was a third road bridge.

“The research showed what that would do to traffic in our communities and it wouldn’t be pretty,” she said.