The province has long-listed six potential routes for a rapid transit line connecting the North Shore to the other side of Burrard Inlet. After hiring Mott MacDonald Ltd.
Mar 2, 2020 12:30 PM By: Brent Richter 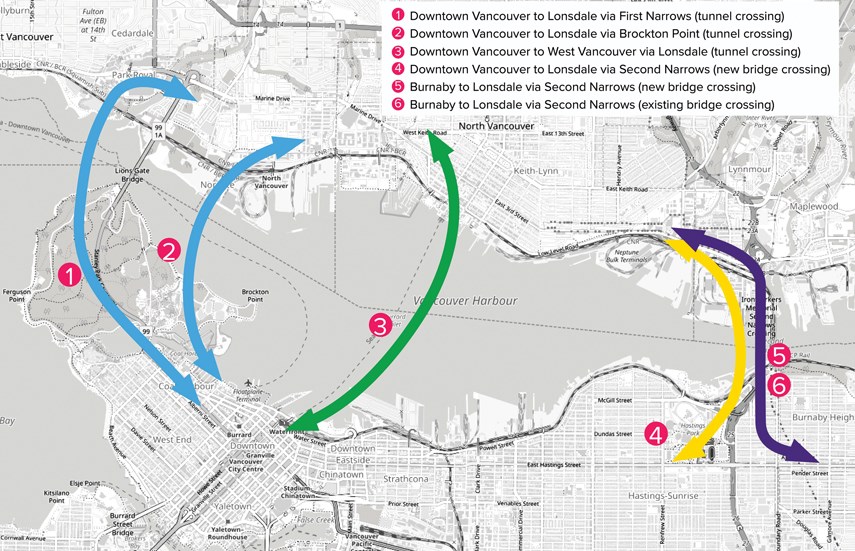 The province has long-listed six potential routes for a rapid transit line connecting the North Shore to the other side of Burrard Inlet.

After hiring Mott MacDonald Ltd. in October 2019, the Ministry of Transportation and Infrastructure released an interim update on the Burrard Inlet Rapid Transit study Monday, as the first phase of the research is completed.

After months of studying the physical geography and topography, structural requirements, ridership projections/needs, traffic models, weather and climate change impacts, as well as notional costs to construct, operate and maintain infrastructure, the engineers say there are at least six projects worth a serious look:

“I think, honestly, any movement towards the rapid transit solution for the North Shore is extremely exciting,” said North Vancouver-Lonsdale NDP MLA Bowinn Ma. “These are more than just lines on a drawing where somebody has said ‘It would be great if we had a crossing over the Burrard Inlet here. … Instead, what's happening under the Burrard technical feasibility study is that we're actually looking at whether we can make this work.”

Connecting the Lonsdale core to Vancouver via a rapid transit line was one of the recommendations of the Integrated North Shore Transportation Planning Project, led by Ma in 2018. All three North Shore municipalities and the City of Vancouver chipped in $50,000 for the $450,000-rapid transit study, along with the province, which put in $250,000.

While all six alignments performed well when it came to ridership and greenhouse gas reduction modelling, given current and predicted land use and commuting patterns, options 1 and 4 showed the best results, Ma said.

Previous studies have found the existing Ironworkers Memorial Second Narrows Crossing cannot be expanded due to structural limitations, but Ma said she was particularly interested to learn it may be at least technically possible to run a transit line under the existing bridge deck through the bridge’s trusses.

Ma said the ministry won’t be releasing more details, including the cost estimates, until completion of Phase 2 of the study this summer. She did say that that all six options came with cost estimates in the same ballpark.

“And it will definitely be in the billions,” she said.

Phase 2 of the study, which will involve engineers drilling down into much more technical detail, is expected to last another three months. Once Phase 2 is complete, Ma said she expects the current list to be narrowed down to just three options for TransLink to consider.

Exciting as it may be to see some tangible options, Ma cautioned the BIRT still has some rather large hurdles to clear. In order to get built, it must be approved by the TransLink Mayors’ Council as part of TransLink 2050, the next major phase in transit expansion.

Ma acknowledged that a traffic-weary constituency may be running out of patience; however, the study is both prudent and necessary before anyone will commit money to the project, she said.

“We’re building credibility. We're building a case for a rapid transit solution to the North Shore. And that can only be accomplished if the entire region pulls together and that's what INSTPP is about. And that's what this study is about,” she said.

This story has been edited since it was originally posted.