Traffic gridlock was the number one topic on the minds of North Vancouver’s business community as three local MLAs – Bowinn Ma, Jane Thornthwaite and Ralph Sultan – sat down to debate local issues at a chamber of commerce breakfast meeting Thursday.
Nov 17, 2017 10:09 AM By: Jane Seyd 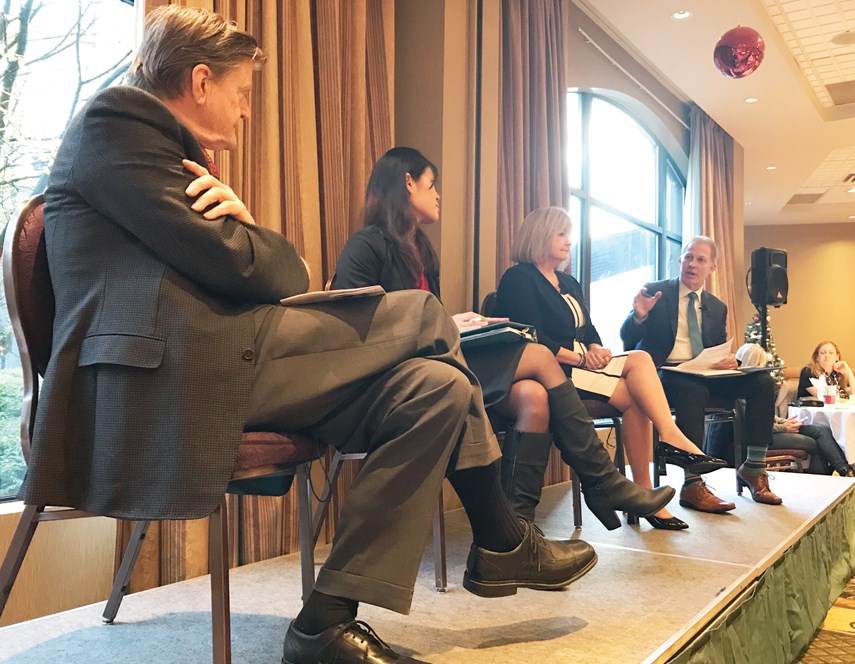 Traffic gridlock was the number one topic on the minds of North Vancouver’s business community as three local MLAs – Bowinn Ma, Jane Thornthwaite and Ralph Sultan – sat down to debate local issues at a chamber of commerce breakfast meeting Thursday.

Ma, MLA for North Vancouver-Lonsdale and parliamentary secretary for TransLink in the NDP government, said housing affordability is a key factor in traffic congestion. If housing was more affordable on the North Shore and jobs were available that paid enough for people to live here, far fewer people would be clogging the roads in vehicles, she said. Currently, “We actually have more traffic coming on the North Shore in the morning and out of the North Shore in the evening than we do the other way around” – a change from five to seven years ago, she said.

“You cannot build your way out of traffic congestion with more lanes and more bridges, more cars,” she said. “The only real long-term solution is public transit.”

Thornthwaite, Liberal MLA for North Vancouver- Seymour, said the new Mountain Highway interchange under construction that will separate bridge traffic from local North Vancouver traffic will help. Thornthwaite also pointed to the idea she recently made public of bringing SkyTrain to the North Shore.

But part of the problem is “There is no way anyone wants to pay for anything,” she said. “They want everything for free.”

Thornthwaite said she supports the mayors’ council idea of looking at mobility pricing for the Lower Mainland, which she has seen in other countries.

There should be incentives for people to get out of their cars, said Thornthwaite, but added, “we cannot demand people get out of their cars and go on transit when the transit system is not prepared to take them where they want to go in a timely manner. When we have to wait an hour for a bus from Deep Cove to go somewhere, nobody’s taking the bus.”

Thornthwaite agreed housing is part of the solution for both residents and businesses. “Obviously if you can’t afford to live here you have to be able to get back and forth,” she said. “It’s tough to get staff if they aren’t physically living here. . . Do we really want our snow removal guys coming from Chilliwack?”

Thornthwaite said many residents equate more development on the North Shore with more traffic, but said “even if we did put a stop to all development the traffic is not going away.”

Thornthwaite said increased density is needed. “We have to have a grown-up conversation about what we want our communities to look like. West Vancouver is going to be a ghost town if it continues on the way it is.”

Sultan, longtime Liberal MLA for West Vancouver- Capilano, pointed to the previous government’s introduction of a 15 per cent foreign buyers tax as one step that’s been taken to address “this surge of foreign capital which has swamped the real estate market, particularly in certain municipalities in Vancouver”

Sultan added solving that issue will also take federal action. He said municipalities also need to step up approvals of development applications. “That’s a very local solution we have to addresss.”

Ma said those opposed to increased density are often homeowners who already own their houses outright. But affordability still affects those people, said Ma, because “the services that they rely on are staffed with people who can’t afford to live here.”

Other topics of debate Thursday morning included raising the minimum wage to $15 an hour and bringing in a universal child care program.

Sultan and Thornthwaite questioned the impact raising the minimum wage might have on small business owners and jobs.

Thornthwaite added there’s no money in the current budget to pay for the NDP’s promised child-care program.

“It’s very expensive and an example of over-reach on the part of our government,” said Sultan, who nevertheless gave the NDP credit for putting the issue on the public agenda.

Ma acknowledged creating $10-a-day child-care program was a key campaign promise, but added, “It’s not going to be overnight.” Ma said the NDP has a 10-year plan to put a universal child-care program in place. “It is a massive undertaking. It will be expensive,” she said.

She compared that to the universal health care program, which currently consumes half of the provincial operating budget.

“How many of you would rather not have universal health care today?” she asked.