Black Kettle Brewing is making a collaboration brew to support women in the beer industry. Plus, Sarah Polkinghorne shares what it's like to be a female brewmaster. 🍻
Mar 13, 2021 8:05 AM By: Elisia Seeber 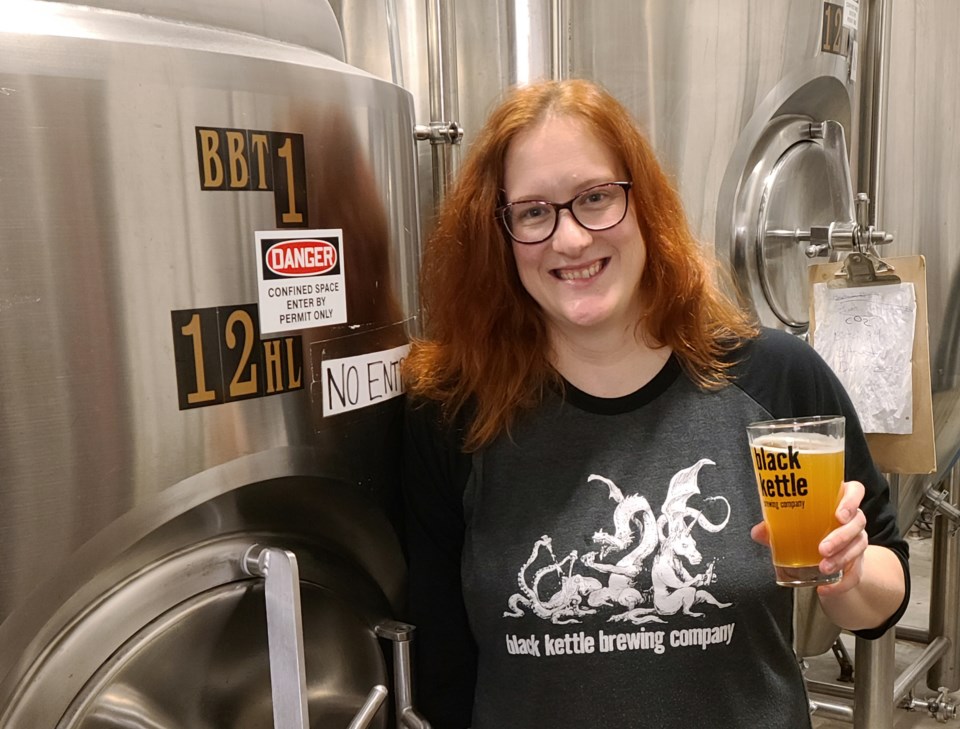 If you had told teenage Sarah Polkinghorne that in the future she’d be sinking pints of golden ale and working in the beer industry, she probably would have laughed at you.

Along with her tastebuds, a lot has changed since then. The 34-year-old, who grew up in Port Coquitlam, is now the head brewer at Black Kettle Brewing Co. in North Vancouver, and she’s hoping to inspire a few people to sink a couple of brewskies for a good cause.

The popular brewery, which has been "making it pour on the North Shore" since 2014 at 720 Copping St., is set to raise a glass in honour of women later this month with a special collaboration brew to mark International Women’s Day, which just passed on March 8.

On IWD, many breweries across B.C. posted photos celebrating the ladies working hard in their taprooms, behind the scenes making brews, and in the many roles that help keep the industry going strong. While more and more women are making their mark in the brewery industry, there’s still a lot fewer women than men making beer professionally.

Among craft brewery employees, women make up around 37 per cent of the “non-production, non-service” staff roles, with most women in the industry working as service staff (54%), according to a report by the Brewers Association back in 2019.

But when it comes to having the title of brewer or head brewer – the number gets a lot smaller, with about 7.5 per cent of reporting breweries employing a female in the role.

Sarah 'stumbled' into the brewery industry

Polkinghorne, who has a degree in chemistry, says she’s been pretty lucky since “stumbling” into the art of brewing.  Her curiosity began to ferment while working in quality assurance for Northam Beverages at Whistler Brewing Co.

“I worked there for a year and a half and that's what really sparked my interest in beer,” she said.

“I liked doing all the analytical testing and all the science side, but I started home brewing and I just got really into it.”

One day, after a pint or two, Polkinghorne thought, ‘why not turn this home brewing hobby into a career.’

“So, I decided to go to the Niagara College Brewmaster program,” she said.

While studying in Ontario, Polkinghorne joined the Society of Beer Drinking Ladies and was able to experience events that were exclusively for women to learn about beer and attend plenty of festivals. When she returned to Vancouver, she became a member of the Pink Boots Society, which supports women through scholarships and education.

“I just got to meet a lot of other great women in the industry,” she said. “A lot who were head brewers and who had started their own breweries. So, I got to, you know, see how far you can come along if you keep plugging away at it.”

After graduating in January 2017, she went on to work at Foamers’ Folly in Pitt Meadows for three years as a brewer and in quality assurance before taking on the challenge as head brewer at Black Kettle Brewing seven months ago.

And, she hasn’t looked back since.

“I love being able to be involved in all aspects of it,” Polkinghorne said. “As a brewmaster, I still get to do the scientific testing, I package, I get to run around all day, and I get to make the beers that I love to drink.”

When asked about the industry’s challenges, Polkinghorne said it was “fairly physical” which might intimidate some women, but it was “nothing that couldn’t be overcome.”

“You have to be able to pick up kegs, lug around boxes and throw around bags of grains,” she said. “But if you have an interest in beer, I always just think you should follow it.

“When I first started in the beer industry, I couldn't pick up a full 50-litre keg. So, I went to the gym and I actually worked out specifically so I would be strong enough to pick one up.”

Having had a lot of help a long the way from other women in the industry, Polkinghorne decided she wanted to do something to give back.

So, she has planned a collaboration event with the Pink Boots Society and the other female employees at Black Kettle Brewing.

The ladies will use a special hop blend bought from the society to come up with a new brew.

“This year I decided it's going to be to SMASH, which stands for single malt and single hop,” Polkinghorne said.  “It's going to have a pale malt and the Pink Boots Society hops and it’ll be closest to a hazy IPA.”

Around $3 from every pound of the hop sold and $1 from each beer will go back to the society to help them continue to educate women about the golden nectar.

The collaboration brew will take place on March 21 and the beer will be available on tap a few weeks later for around a month.

Polkinghorne hoped other women would come down and give the brew a try.

“You never know what you're going to like,” she said. “Your tastes change, and often what happens is you find one beer you like, and then your passion kind of just grows from there.”