The $7-million safety improvement project for pedestrians and bike riders along the Stanley Park Causeway is a rousing, rolling, walking success, according to North Shore cyclist Heather Drugge.
Mar 4, 2016 12:00 AM By: Justin Beddall 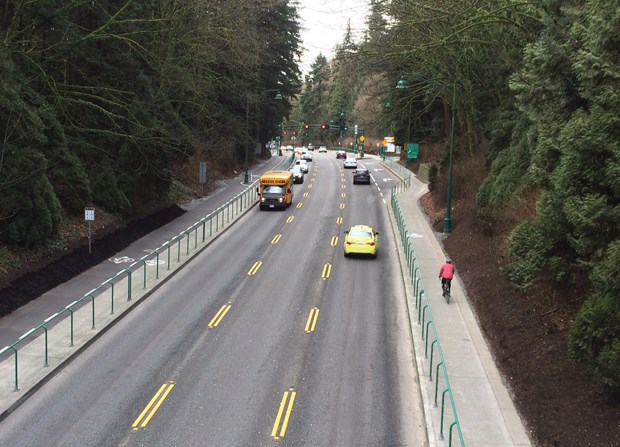 The $7-million safety improvement project for pedestrians and bike riders along the Stanley Park Causeway is a rousing, rolling, walking success, according to North Shore cyclist Heather Drugge.

“I ride (the route) every single day, two times a day,” said Drugge, who is a North Shore committee member of HUB Cycling. “I’m very impressed with how they approached the build. I was never impeded by construction once.”

Now that the project is complete she gives the finished project this review: “It’s fantastic. I’m really super happy with it. I think they’ve done a great job. This kind of project should help to encourage people to cycle.”

The safety improvements include a widened east sidewalk with separated cycling and walking lanes. The west sidewalk has also been widened to offer added safety for southbound cyclists and includes two passing lanes for cyclists. New safety fencing has also been installed to separate cyclists and pedestrians from vehicle traffic on both sides of the Stanley Park Causeway.

According to the Ministry of Transportation and Infrastructure, each day during peak summer months, 2,200 cyclists and 200 pedestrians travel along the 2.2-kilometre stretch that provides access to Stanley Park and downtown.

In 2013, a 61-year-old North Van cyclist died after she fell into traffic and was struck by a bus after she collided with pedestrian. Her family later filed a lawsuit against the Ministry of Transportation, West Vancouver Blue Bus Transit System, the bus driver and two pedestrians.

In February 2014 the ministry announced it was working in partnership with the City of Vancouver and Vancouver Park Board to develop safety improvements for the causeway between Lost Lagoon and the Lions Gate Bridge.

Construction began in September 2015 and was completed last week.