Just hours after the federal government announced it had approved the Trans Mountain pipeline expansion, local First Nations vowed to continue fighting the project.
Jun 21, 2019 9:32 AM By: Jane Seyd 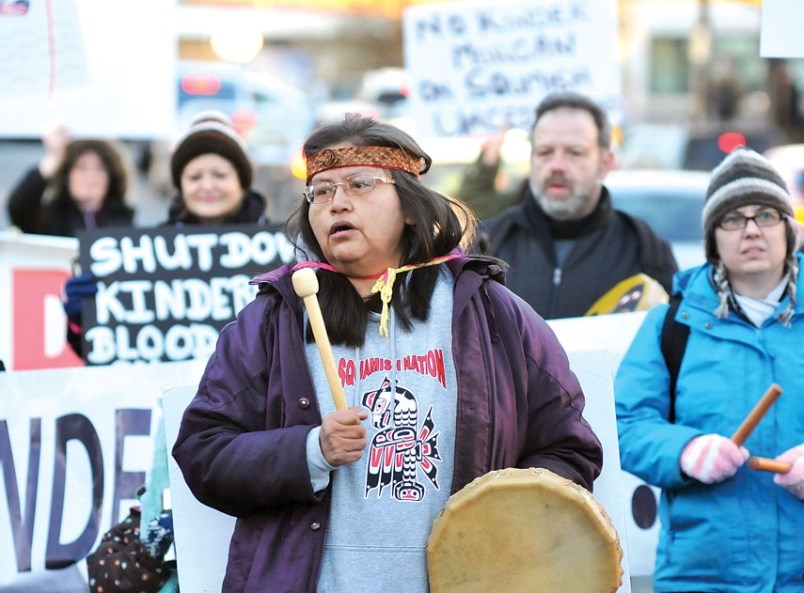 Chief Leah George-Wilson of the Tsleil-Waututh Nation said at a press conference shortly after the decision her nation will appeal the decision in the courts.

George-Wilson said because the federal government is the owner, regulator and enforcer of conditions imposed on the project, it makes it “impossible to make an unbiased decision.”

Khelsilem, spokesman for the Squamish Nation, called the decision “a continued betrayal of promises made to us by Trudeau,” describing the federal government’s meetings with the Squamish as “a shallow attempt at consultation that resulted in a failure to address our concerns.”

Those include continued concern about risks from a potential oil spill, said Khelsilem. “Governments cut back on oversight of all industries on a regular basis, only to express surprise when something goes wrong,” he said in a statement.

Will George, a member of the Tsleil-Waututh Nation who has been among activists with the Protect the Inlet group protesting at the Burnaby terminal site vowed, “No matter who approves it, this pipeline will not be built.”

Environmental groups also called out the government for declaring a climate emergency the day before the pipeline expansion was approved.

At a press conference announcing the approval Tuesday, Prime Minister Justin Trudeau acknowledged, “some people are disappointed in this decision.”

But Trudeau said his government doesn’t see economic growth and environmental protection as mutually exclusive. “We need to create wealth today, so we can invest in the future,” he said.

Trudeau said the pipeline expansion is needed to get Alberta oil to more markets and create “thousands of solid middle class jobs for Canadians.”

He said any profits from the pipeline will go into clean energy initiatives. The government also promised to offer First Nations a financial stake in the project.

The expansion will nearly triple the capacity of the pipeline – which transports crude oil from northern Alberta to a tanker terminal in Burnaby - from 300,000 barrels of oil a day to 890,000 barrels a day.

North Vancouver MP Jonathan Wilkinson defended the decision to approve the pipeline, saying the government has “done an enormous amount of consultation with Indigenous communities . . . and looked at where we could find ways to address the concerns that were raised.”

“I understand the Squamish and the Tsleil-Waututh may have a different view.”

Wilkinson pointed to measures the government has put in place to protect southern resident killer whales as well as beefed up spill response capacity.

Wilkinson said the project is not at odds with measures to cut carbon emissions because the amount generated by the Alberta oil sands is already included in Canada’s targets for carbon reduction.

“We actually have to think about this in the context of an overall transition to a clean energy future,” he said. “That is something that is going to take time.”

Wilkinson said in his own riding, there are some people who are both strongly for and against the project “and I’m not sure there is any way to ever change their view” but there are also many people “in the middle” who have concerns and questions they want addressed. “We have addressed those issues,” he said. “The vast majority of people in North Vancouver will be supportive of this decision.”

Burnaby North-Seymour MP Terry Beech issued a statement saying the majority of his constituents are against the pipeline, which is why he voted against it.

Other political candidates in North Shore ridings also weighed in on the decision.

Amita Kuttner, Green Party candidate in Burnaby North-Seymour said she was “profoundly disappointed” by the announcement and called it “absurd” that the pipeline was approved one day after government declared a climate emergency, as did North Vancouver Green candidate George Orr.

Burnaby North-Seymour NDP candidate Svend Robinson called the approval “a total betrayal” of promises made by the Liberals that major projects would require the support of both the community and First Nations.

Trans Mountain president Ian Anderson issued a statement calling the decision a “vote of confidence in the ability of a project of this magnitude to succeed.”

Trudeau said Tuesday the company has indicated it plans to have “shovels in the ground this construction season.”