The awakening of the canoe Ch’ich’iyuy on the shores of Ambleside Park brought together representatives of the West Vancouver Police Department and the Squamish Nation on Thursday afternoon.
Mar 27, 2016 12:00 AM By: Anna Dimoff 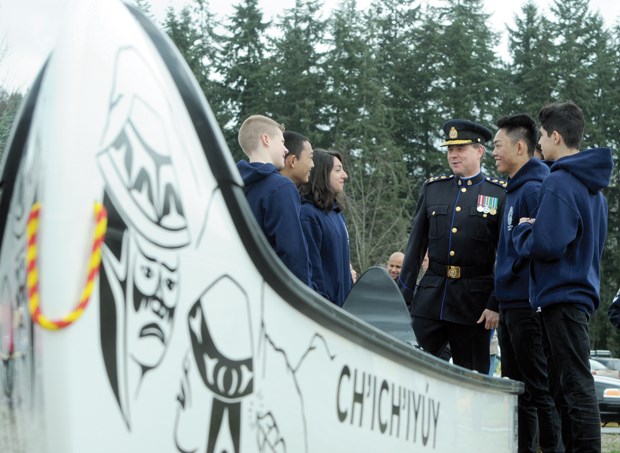 The awakening of the canoe Ch’ich’iyuy on the shores of Ambleside Park brought together representatives of the West Vancouver Police Department and the Squamish Nation on Thursday afternoon.

The name of the canoe denotes the story of twin high-born Squamish sisters bringing peace to the Squamish and Haida people during a time of instability. Symbolizing strong relationships between the West Vancouver police and Squamish Nation, the 29-foot canoe will be used to participate in the

Pulling Together Canoe Journey this July. The Pulling Together initiative strives to enhance understanding between public service agencies and aboriginal peoples by “canoeing the traditional highway,” according to the event website.

Chief Const. Len Goerke was called to speak to the crowd as a witness of the ceremony. He has participated in previous canoe journeys with the organization and found that the milestones met along the way were not only present for the youth or the First Nations elders they met, but for the police involved as well.

“These journeys have had a huge impact on me personally in learning about the truth of what our shared history is like and helping me become more determined than ever about the future being better for all of us collectively,” he said. “Part of a better future for all of us is good and strong relationships.

That’s what this canoe in many different ways symbolizes – that intention on the part of all of us to build those relationships into the future.”

Const. Jeff Wood, spokesman for the West Vancouver Police Department, was responsible for organizing the entire project and was presented with a blanket for his efforts in joining the two communities together. The long process was an emotional one, said Wood, as it all fell in place this afternoon in front of a crowd.

The canoe also commemorated the life of Jonathan “Jono” Hungerford, who passed away in 2001 from cancer at the age of 21. His uncle, Gerald Hartwig, donated funds to the project to help carve the canoe.  The project also received a grant from the West Vancouver Community Foundation.

“He was happiest with a backpack on and heading out into the woods,” said the father, Robert Hungerford. “He was spiritually tuned in to the outdoors … It’s hard to describe in words but his spirit certainly lives on and the fact that he can help people move and become happy in their lives … is wonderful.”

Moving forward, Wood said the canoe will be used as a community engagement tool to connect and educate people on local First Nations culture and the history of the area.

“It’ll basically be used as a tool to allow us to connect people to our area and get a better understanding of who we are and who the First Nations people are,” said Wood.