Squamish Nation calls on B.C. government to halt old-growth logging in its territory

'We demand that the B.C. government take immediate and sustained action to defer all harvest and development activities within areas of concern and to ensure that we as a Nation are included'

The Squamish Nation is calling on the B.C. government to halt old-growth logging in its traditional territories to allow them time to develop long-term sustainability plans.

A formal letter stating the request was sent to Premier John Horgan just a day after logging deferrals in the Fairy Creek watershed and in Central Walbran in the South Vancouver Island region were approved by the B.C. government.

The order was passed by cabinet on Wednesday (June 9) after the Pacheedaht, Ditidaht and Huu-ay-aht First Nations made the request for a two-year deferral on Monday.

"We have allowed, as a province, the title holders to make decisions on their land," Horgan said, announcing the news during a press briefing on Wednesday.

The old-growth logging in the Fairy Creek watershed has gained national attention in recent weeks, as hundreds of protesters have gathered in the region, defying a court injunction, in an attempt to halt the logging of some of the oldest trees in the province.

The deferral was a quick response that Squamish Nation says hasn’t been seen with regards to other territories.

Squamish Nation leaders are also calling for a two-year deferral of logging on its 690,000 hectares, saying the government has failed to take immediate steps to implement the urgent recommendations of the Old Growth Strategic Review panel’s April 2020 report, which was commissioned by the government.

“These recommendations, particularly as they relate to collaboration with Indigenous nations and protection of at-risk forests, presented B.C. with the opportunity to build lasting and meaningful relationships with Indigenous communities and to realize your commitment to reconciliation,” Squamish Nation council co-chairs Tiyáltelut, Kristen Rivers, and Skwetsí7meltx̱w, Joshua Joseph, wrote in their letter to the premier.

“However, as of now, no meaningful action has been taken to implement these.”

On June 10, the Squamish Nation formally gave notice to the Province of B.C. to defer old-growth logging for two years in the Nation’s 690,000 hectares while the Nation develops long-term sustainability plans.

While 44 per cent of the Squamish Nation territory’s old-growth forest has been protected, 56 per cent remains unprotected and the nation states that 78,000 hectares remain at risk unless the province immediately stops new clear cuts.

“This call requires the province to take meaningful action toward honouring its commitments regarding old-growth forest management, including the implementation of immediate logging deferrals and enabling the full participation of Indigenous Nations in these processes,” Squamish Nation spokesperson and councillor Khelsilem said in a release.

“Old-growth trees would not be falling, and everyone would have more certainty if the province had put immediate deferrals on all at-risk old-growth as per recommendation six of the Old Growth Strategic Review.”

The Squamish Nation says it has identified at least 20 cut blocks within its territory, all within 150 kilometres of Vancouver, with old-growth logging activities proposed in the next five years that it will oppose.

“Our forests play an integral ecological role in the biodiversity and health of B.C. ecosystems and possess incalculable and irreplaceable cultural value and significance for our Nation,” Rivers and Joseph wrote in the letter.

“In light of the ongoing risk of development to old-growth forests and the importance of these forests to our Nation’s well-being – including our cultural, spiritual and economic needs – we demand that the B.C. government take immediate and sustained action to defer all harvest and development activities within areas of concern and to ensure that we as a Nation are included, consulted, and enabled to provide free, prior and informed consent respecting all commercial activity within our traditional territory." 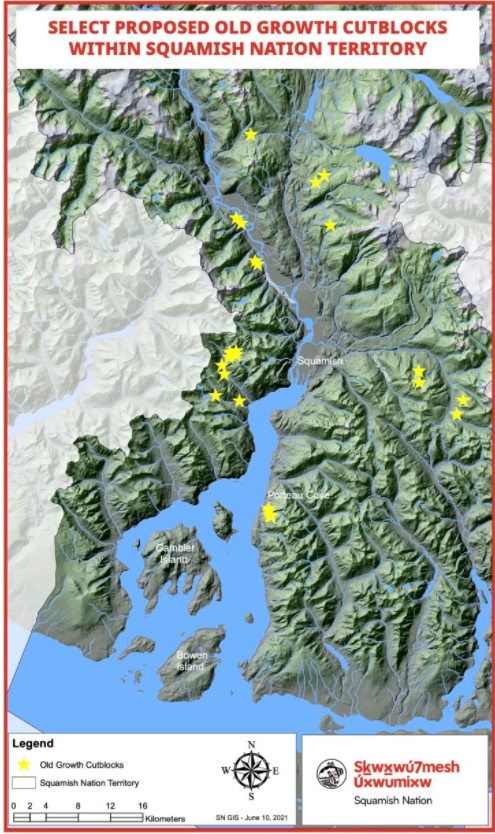 They also sent a reminder that B.C. has committed to upholding the minimum human rights standards in the United Nations Declaration on the Rights of Indigenous Peoples.

“These include standards regarding the right to be involved in decision-making, land stewardship, and the necessity to obtain free, prior, and informed consent,” Rivers and Joseph wrote.

Rivers and Joseph also called on the government to support Squamish Nation in developing a new planning process, based on both Indigenous knowledge and science to ensure long-term ecological integrity and economic opportunities.

The deferrals for Fairy Creek watershed come after the province deferred the logging of nearly 200,000 hectares of old-growth forest across B.C. back in September.

In his announcement on the Fairy Creek Watershed, Horgan said his government will be working to defer the logging of more areas of old-growth in the province, but he would not put a timeline on when old-growth logging would be completely ended in B.C.

"I'm very excited about the deferrals that will be coming later in the summer and all through the implementation of our old-growth plan," he said.

- with files from The Canadian Press