Arianne Dielman broke headlines for her initiative in petitioning the City of Delta to create a crosswalk near a Ladner park.
Nov 19, 2020 4:38 PM By: Cameron Thomson 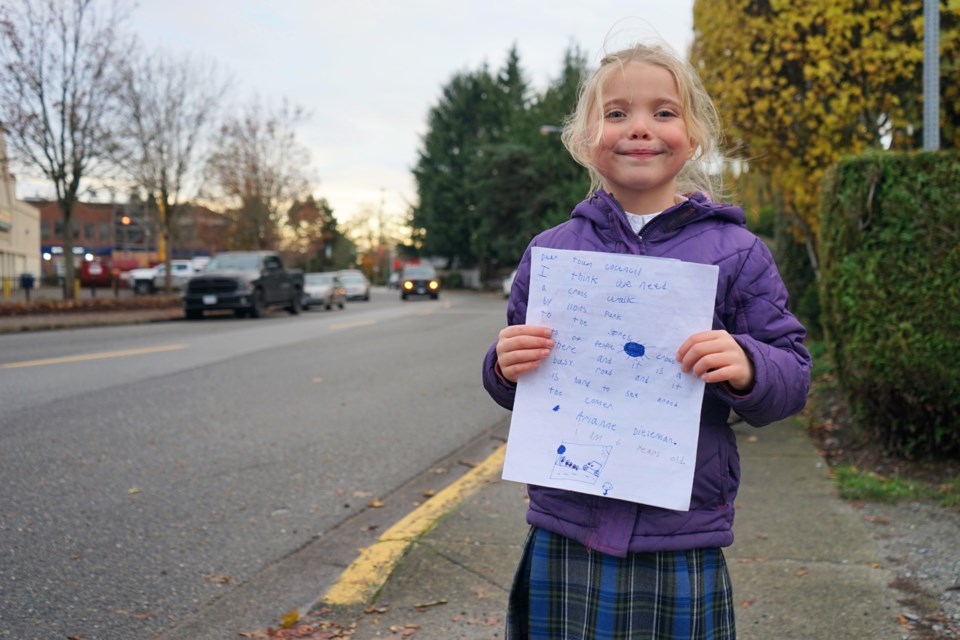 After a close call involving her brother Westley, six-year-old Arianne Dielman created a petition for a crosswalk on Central Avenue in Ladner that she sent to city council.Cameron Thomson

Arianne Dielman broke headlines for her initiative in petitioning the City of Delta to create a crosswalk near a Ladner park.

Arianne sent a letter along with the signatures of 30 local residents acquired through a door knocking campaign to Delta city council on Oct. 19. The letter, complete with a drawing of her family crossing a street together, conveyed her desire for a safer crossing between the entrance to Lions Park and Central Ave.

“Lots of people cross there and it is a busy road and it is hard to see around the corner,” Arianne’s handwritten letter read.

Arianne told the Optimist in an interview on Thursday, Nov. 19 that she set her sights on this initiative after her brother Westley was almost struck by a vehicle while attempting to make the crossing.

"It made me feel scared and made me want to do the petition," she said. "I felt more and more that we needed a crosswalk."

Arianne’s passion for the crosswalk launched her into the provincial spotlight on Thursday, giving interviews with news media across the Lower Mainland.

Another letter which accompanied Arianne’s letter and petition to city council was written by her mother Carmelle. She wrote that as her daughter collected signatures, others recounted times when they narrowly avoided being hit while trying to cross the same road.

"It's definitely a corner that I think is very dangerous and so I'm definitely excited that they are taking it seriously,” Carmelle Dielman said.

Dielman shared why she believes her daughter’s story was so well received by so many.

"I think it’s something where people are looking for really happy news stories these days and it's always encouraging to hear kids who are proactive," she said.

In response to Arianne’s letter and petition, the City of Delta announced the city’s engineering department will complete a crosswalk assessment on the area in question. The findings of which will be referred to the transportation technical committee for review.

In response to the city’s action, Arianne said she felt happy and grateful that the city has taken her letter seriously.

"You might want to go slower so that you don't hit anybody," she said.