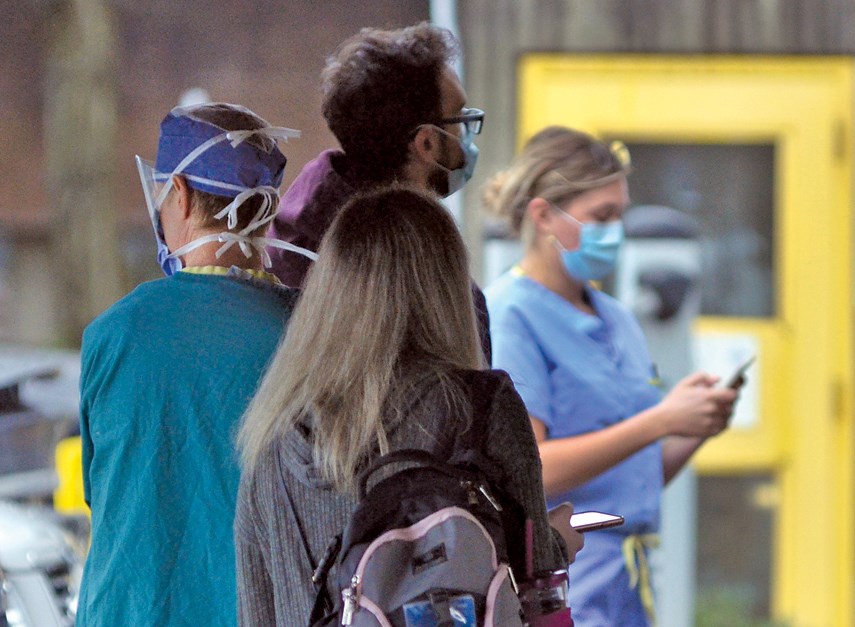 Staff members from Lions Gate Hospital line up for COVID-19 vaccinations at the hospital on Monday. In West Vancouver, most of the residents at Capilano Care Centre have now been vaccinated. Paul McGrath, North Shore News
Residents at West Vancouver’s Capilano Care Centre – where a COVID-19 outbreak has claimed 26 lives – were among the first long-term care residents on the North Shore to receive the COVID-19 vaccine.

Elderly residents at the care centre who were eligible received their first dose of the Pfizer vaccine Dec. 24.

Larry Roberts, spokesman for Revera, the company that owns the Capilano Care Centre, said most of the residents have now received the vaccine.

In total, 76 residents of the 205-bed care facility and 66 staff members tested positive for the virus since the outbreak was declared Nov. 9.

A total of 50 residents and all staff have now recovered from the virus.

Residents and staff of long-term care homes, as well as front-line hospital staff who work in emergency and COVID-19 wards, are among the first to get the vaccinations in B.C., as part of a plan that targets the most vulnerable as well as those in crucial medical positions who may be exposed to the virus.

The first COVID-19 vaccination clinics for health-care workers on the North Shore – which also made use of the Pfizer vaccine – happened Dec. 21 in North Vancouver.

On Monday, another vaccination clinic was held for emergency room, ICU and COVID-19 ward doctors and staff at Lions Gate Hospital.

Dr. Bonnie Henry, the province’s medical health officer, said on Monday that the goal is to immunize 150,000 people by the end of February.

Those at the front of the vaccination line include residents and staff of long-term care and assisted living facilities, plus those who are waiting for a bed in long-term care. Front-line medical staff, essential visitors of elderly care home residents, paramedics and those living in isolated First Nations communities are also priorities for the vaccine.

By the end of March, the province hopes to give almost 550,000 people a first dose of the vaccine, said Henry. Some people will also get a second dose.

Other groups near the front of the line for vaccine  include seniors over 80; Indigenous seniors over 65; people living in homeless shelters, group homes and prisons; as well as home support workers and clients, and other medical staff including doctors and community health-care workers.

People who have previously had COVID-19 won’t get the vaccine in the first round of immunizations as natural immunity is thought to last several months.

About 54,000 doses of vaccine have so far been received in B.C., said Henry on Monday.

But she said she is hopeful both that production of existing vaccines will ramp up by March and that other vaccines – including the AstraZeneca and Janssen vaccines – will be approved by Health Canada in the coming months.

“It’s a monumental task and there are many months to go in this,” said Henry on Monday. She urged people to stick to public health orders limiting social contact, describing the rollout of vaccine as a race with the virus. “We’re in this race right now. We need to make sure that we can win.”

According to statistics released by the BC Centre for Disease Control, there were 61 new cases of COVID-19 on the North Shore during the week that ended Dec. 26. Of those, 55 cases were in North Vancouver and six were in West Vancouver.