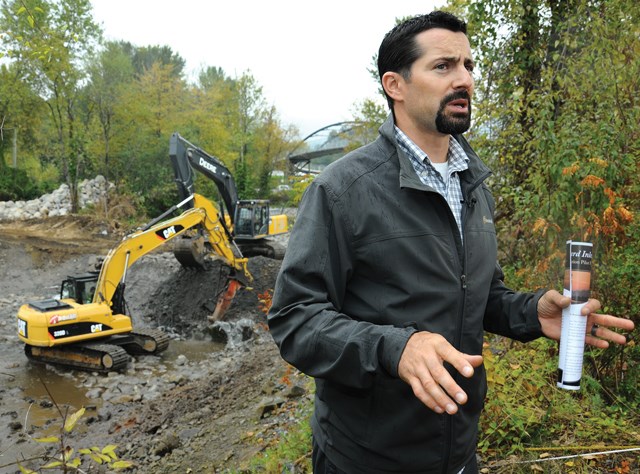 Nestled beside the constant hum of an industrial work yard, the Seymour River estuary might not resemble much, but these waters were once a place of transformation.

"This all used to be open, productive, intertidal flats and estuaries," said Ken Ashley, professor of ecological restoration at BCIT. "Now about 95 per cent of it's gone, and because we've got heavy industry that's been here for decades, and bridge and transportation corridors, there's just a small percentage of the natural habitat left."

The estuary, located under Ironworkers Memorial Second Narrows Crossing, is set to become one of three such ecosystems to receive a much-needed facelift.

Ashley together with partners that include the Habitat Conservation Trust Foundation, the Squamish Nation and Seaspan spearheaded the Burrard Inlet Restoration Pilot Program to resurrect the dying bodies of water. The groups are working to bring salmon and other fish and wildlife, back into the estuaries.

"What many people don't realize is that without an estuary where salmon and trout can adjust from salt water to fresh water, you get very low survival," said Ashley. "What you normally would have seen in here would be chest high sedges, vegetation. There would have been lots of large wood that would have given some structural complexity. There would have been trees with ospreys in them and eagles, fish, the whole estuarine and terrestrial ecosystem - and it's more or less nonexistent now. "While construction has started at the Mackay Creek estuary, work has yet to begin on Seymour and Mosquito Creek.

Ashley is working with his students to help with the rebuilding process. "The planning work is going on right now just to lay out what needs to be done and develop plans, that's where the students are interacting with it," he said. "The actual real construction work will start next year."

Ashley said with all three estuaries, heavy industry and natural ecosystems would be coexisting.

"For years there's been a hatchery up at the top here by the dam," said Ashley of Seymour's estuary. "They've had such low survival, they're doing such drastic things as putting the juvenile salmon in barges and they're towing them out to Point Atkinson to let them go because the return rate is so low."

But, he said, when you have an estuary the juvenile fish coming down the river can stop and adjust from life in fresh water to life in salt water, a transition that is hard for an animal.

"For people it doesn't matter. You can swim in fresh water, you can swim in salt water, it doesn't matter because you don't live there. But for fish physiologically to make the difference, they need to have a transition zone where they can hang out for a couple of weeks, get their bodies adjusted to one or the other, and not be eaten by something in the process," said Ashley. "When you add a bunch of large wood and habitat complexity in there, it allows the fish to have that time to activate without getting eaten because when you're a juvenile salmon everybody wants to eat you, when you're an adult salmon everybody wants to eat you. So you have to basically hide whenever you're in an estuary so you have time to make the physiological adjustments."

Randall Lewis, environmental adviser for the Squamish Nation, said the collaboration between the groups is an important step in habitat restoration.

"We understood that to fix this we have to create partnerships," said Lewis. "What we're doing today are really band-aid solutions, but they make a big difference for the future."

Lewis said the Mosquito Creek estuary in particular is important for the Squamish, adding that in the past there were almost thousands of fish populating the area.

"When these fry are leaving the Seymour estuaries, the survival rate is zero," he said. "There's nothing out here for them to survive in, there's no trees, logs dumped, there's no estuarine areas for these young ones to thrive in."

The Mosquito Creek location, said Ashley, has been an eyesore that will be restored.

"This is basically as degraded a habitat as you can get," he said of the estuary's current condition.

Barry Chilibeck, with Northwest Hydraulic Consultants, another partner in the restoration project, said the Mackay Creek construction has made vast improvements on the salmon run already, but more changes are still to come.

"There were some real serious impediments in this estuary in Mackay Creek," said Chilibeck. One of the impediments was a large concrete weir that created an obstacle for the migrating fish.

"This developed a really high drop and the chum and the coho salmon that came in the estuary at low tide, there was no way for them to get over that weir," said Chilibeck. "When that happened it made them subject to predation in the lower estuary by seals. One of the primary things was getting rid of that weir and that's what we did."

The weir is being replaced with a naturalized creek outlet, said Chilibeck, which gives the salmon a more natural channel to climb up at any tide level.

"The second part of the project is along this shoreline, along the west side," he said. "What you don't see is a lot of salt marsh and vegetation, and that's primarily because the elevations that those are sitting at are too low."

To solve that problem, Chilibeck said pads would be built at the right elevation that will allow a salt marsh community, such as plants, to develop as well as putting in wood to keep geese away.

Tom Tasaka, project director at Seaspan, said construction crews at Mackay have had to work with the tides, adding that crews have started as early as 2 a.m. He said the project is right in line with Seaspan's core values and collaborating with the other groups was important.

"I'm a project director so to make anything happen you have got to do things in a partnership," said Tasaka.

Bodwell High School, located adjacent to Mackay Creek estuary, has also been involved in the process, including educational efforts.

Paul Yuen, president of Bodwell, said they have students from 38 countries attending the school this fall and having the exposure to Mackay Creek is an important learning experience.

"Most of these students come from developing countries and they have a lot of challenges in their environment," said Yuen. "We are going to mobilize the whole school community to be taking part, to be observing, to be helping, to be getting their hands dirty, and hopefully they can bring this back to their own country."

Along with the City of North Vancouver, the federal government has also helped contribute to the project.

Andrew Saxton, MP for North Vancouver, said the federal government has 104 projects on the go across the country.

"It's great because every layer of government involved is making it happen," said Saxton of the North Vancouver projects. "It's really impressive to see that happening."

Brian Springinotic, CEO of HCTF, said the benefit of restoring the estuaries will go back into the community and that keeping the estuaries in pristine condition will fall on the shoulders of those in the surrounding areas.

"We are looking to local partners to monitor the sites," said Springinotic. "Each one is going to be different. The solution to who will sustain them will vary from site to site."

Estuaries, though small in size and in numbers, said Ashley, are disproportionately important because of their ecological significance.

"It's like for cars or transportation, it's a big sort of meeting place of creatures from all those different environments - aquatic, terrestrial, marine and fresh water - and so when you lose those, it's like the lights at an intersection go out, things start to fall apart," said Ashley.

"Without functioning estuaries you can't have healthy salmon populations, you've got a chain with a broken link."