The group will assemble at noon before heading into Stanley Park to the Lions Gate Bridge
May 3, 2021 9:30 AM By: Lindsay William-Ross 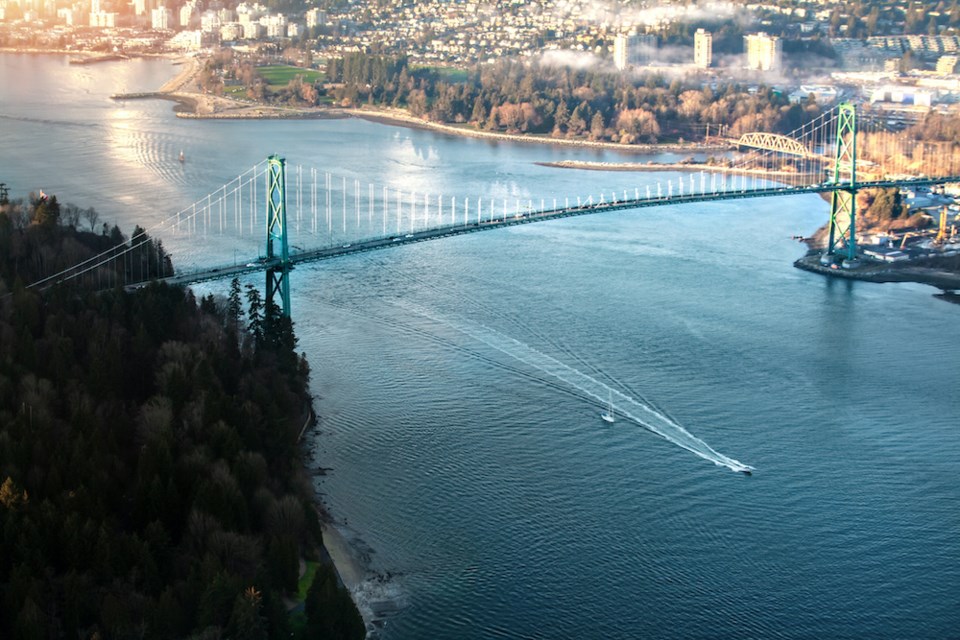 Climate activist group Extinction Rebellion Vancouver is planning to march across the Lions Gate Bridge Monday as part of a multi-day protest in the city. Photo via FangXiaNuo / Getty Images

A group of demonstrators calling on the B.C. government to take urgent action on the climate emergency are entering into a third consecutive day of action Monday, and will once again target a major Vancouver bridge.

Members of Extinction Rebellion’s (XR) Vancouver will spend number three of five days of its "Spring Rebellion" looking to disrupt vehicle movement between downtown and the North Shore as the group plans to shut down the Lions Gate Bridge to "say no to fossil fuel exports in waters of the Salish Sea, and to demand a Citizens' Assembly on climate and ecological justice."

The group is planning to assemble at noon in Vancouver's Devonian Harbour Park to begin the walk into Stanley Park and onto the Lions Gate Bridge.

Protests and arrests in Vancouver over the weekend

The "Spring Rebellion" protests began Saturday when Extinction Rebellion Vancouver met up at the plaza of the Vancouver Art Gallery for a brief rally before demonstrators gathered around a massive pink boat placed in the middle of the Granville and Georgia intersection, emblazoned with the phrase "Tell the truth."

“At its peak, a group of 150 people blocked the intersection of Granville and Georgia Streets while surrounding a [15-foot boat] boat,” said VPD Const. Tania Visintin.

In total, five adults ranging in age from 22 to 65 refused to leave and were arrested for mischief and intimidation to block a roadway, "after hours of attempted negotiation," police said. 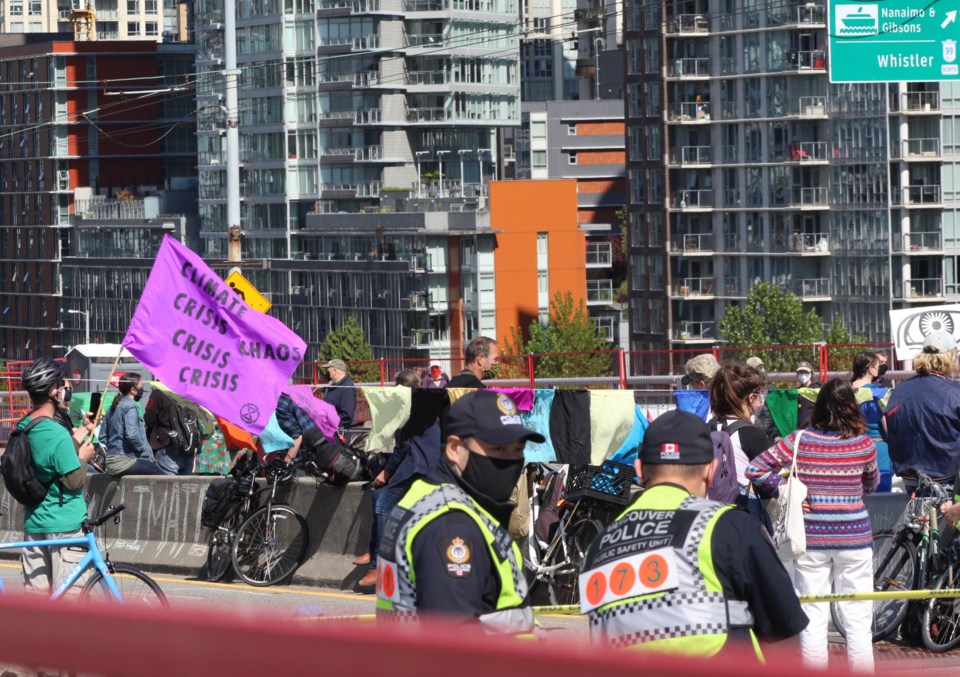 Around two dozen police were on hand at the protest site, mostly watching the activities, while others manned vehicles or blocked bridge entrances. By Brendan Kergin

On Sunday, Extinction Rebellion Vancouver demonstrators marched from the Vancouver Art Gallery to the north end of the Granville Street Bridge where around 75 people gathered with banners, signs and music. They set up and stayed there for several hours. Activities included dancing and speaking with pedestrians crossing the bridge.

Vancouver Police watched on with a sizeable group of officers at the protest or blocking entrances on the bridge.

After the group refused to leave, police arrested eight people.

"The protest was peaceful and the majority of the people left the bridge," the Vancouver Police Department states in a press release. "Police were forced to arrest the remaining eight people for mischief and intimidation for blocking a roadway after several verbal warnings were given."

Group has plans for further events this week

Following the three days of intersection and bridge shut-downs, Extinction Rebellion plans to host a bike/skate for climate and educational sessions with elders and members of host first nations on Tuesday and Wednesday.

Maayan Kreitzman, a volunteer coordinator, said: “We do not want to cause disruption to people going about their everyday lives, but we have no other choice at this point. Climate disasters like melting ice caps and huge forest fires get more terrifying by the day, but instead of taking action, the Canadian government is allowing emissions and habitat destruction to increase. This is beyond bad - it’s genuinely scary psychopathic behaviour. I’m doing this for the kids I want to bring into this world.”

The "Spring Rebellion" is intended to highlight the group's demand to “tell the truth” about the climate and ecological emergency, calling on governments to launch emergency public education and communication campaigns and media institutions to report the news of the emergency with the emphasis and impact organizers say the issue deserves.

With files from Brendan Kergin, Megan Lalonde, and Elana Shepert