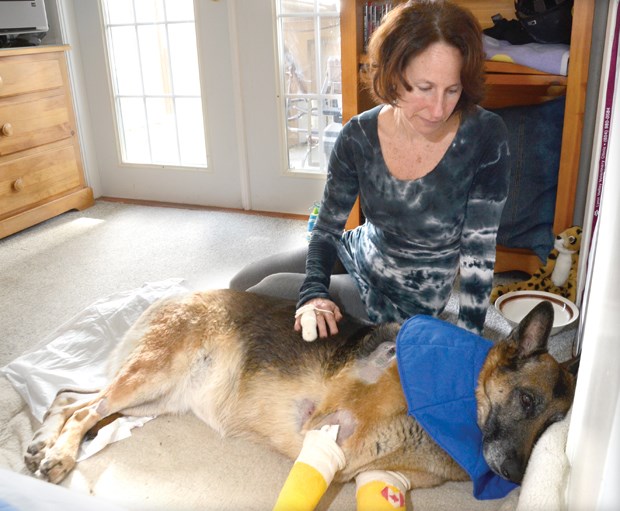 Lisa Granger of North Vancouver comforts her German shepherd Natasha after the dog was attacked by a pit bull that pushed through a fence to get into Granger's yard.Mike Wakefield, North Shore News

A North Vancouver woman is in shock after her elderly dog was "torn to pieces" in an unprovoked attack by an off-leash pit bull.

Lisa Granger and her 10-year-old, partially crippled German shepherd Natasha were in the front yard on the 800-block of East 14th Street Thursday afternoon when the neighbour's pit bull pushed through the fence.

"She didn't even know it was coming. She was sleeping in the sun in my yard and it charged through the fence," Granger said. "She was a completely defenseless victim... It's just the most horrifying thing I've ever seen. She lost chunks of leg down to the bone."

It took five people - one of them using a spade - to pry the pit bull's mouth open, to get the aggressive dog off. But it circled around and attacked Natasha again, Granger said.

"The only thing that finally saved my dog was, when we got the pit bull off the second time, the owner had thrown herself on the dog and was screaming at us to get our dog out of there or it was going to go again. She couldn't hold it," Granger said.

Three hours of surgery and a $3,000-vet bill later, Natasha is back at home but she can no longer stand up and will require constant care and daily trips back to the vet while she heals.

Granger too suffered bites in the incident.

RC MP officers attended the scene, but turned the matter over to the District of North Vancouver's bylaw officers, who handle animal control issues. Granger then learned this is the second time the pit bull has attacked another dog.

"It's the second offence and they didn't seize the dog. My vet was horrified," Granger said.

Officers told Granger the dog was only visiting the home next door, but that it spends most of its time with its other owner on Premier Street.

While the bylaw investigation is expected to last a few more days, staff have contacted the pit bull's owners.

"We've given them orders to manage their dog as an aggressive dog," said Carol Walker, the district's chief bylaw officer. "It means the dog must always be on a leash and muzzled when it's on any public street or in any public place."

Beyond that, the aggressive dog must be neutered and confined to premises that prevents the dog from getting out and prevents unauthorized visitors from getting in.

The last time bylaw officers were called to deal with the pit bull was in 2013 when it attacked another dog, though that scrap didn't result in any injuries.

"(They) were given a warning at that time that the dog has a propensity toward that and they need to be actively training and working with the dog," she said. "In the past, the owners have been quite responsive so we fully expect them to comply with any of the regulations that we've asked them to follow."

But Granger said she wants the pit bull destroyed.

"To be honest, I'm a dog lover, but I don't think this dog should be kept alive. Even if it's never at this property, what's to stop it from attacking somebody else over by Premier Street?" The district has that option, Walker said, but it requires a court order to show a dog "killed or seriously injured a person or a domestic animal."

"We've got some public concerns of that nature but it's still a little bit early. We're still conducting interviews," Walker said.

While the incident has been troubling, the district does not believe the public is at risk, Walker said.

"In our experience, a dog that's aggressive to another dog doesn't necessarily become aggressive to a human. It's quite rare that transfers over that way."