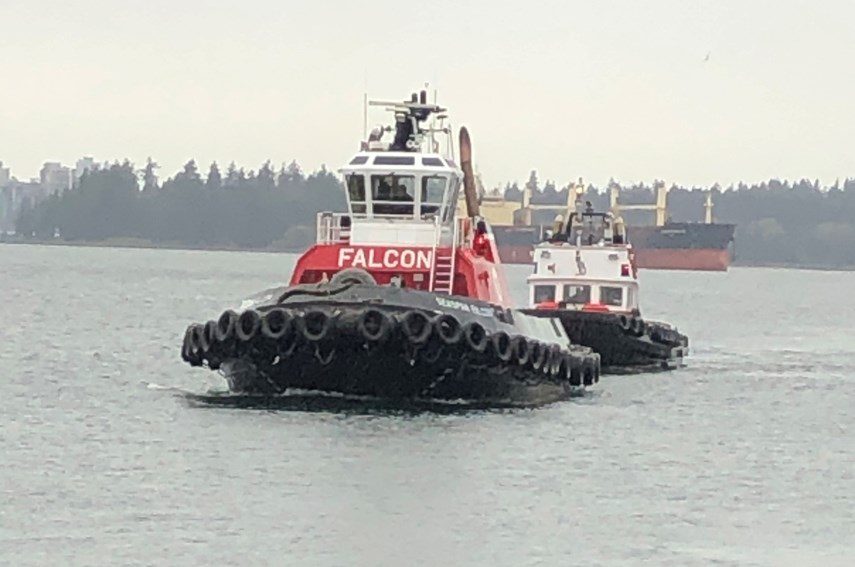 A tug parade was held Thursday in honour of Hughie Wallace, an operator who worked in the family business for 55 years. photo Brenda Cates

North Shore tugboat operators put on a powerful display last week to honour one of their own.

A tug parade was held on the North Vancouver waterfront Thursday, Nov. 12 in honour of Capt. Hugh (Hughie) Cates Wallace, who passed away Nov. 3, 2020, at age 76. Wallace was born into the shipping business, the son of Mary (Cates) and Hugh Wallace.

The names Wallace and Cates are both legendary in the history of the North Shore waterfront. Hughie spent 55 years in the family business driving a tug, earning a reputation as a master pilot. His obiturary notes that he became known as the “Wayne Gretzky of ship berthing skippers.”

On Thursday six tugs – including Cates #1, #3, and #5, along with the Seaspan Kestrel, Falcon and Hawk – each saluted Wallace with a whistle blast followed by a moment of silence.

“Hughie was a gifted boat handler,” friend Bill Woods told the North Shore News. “He used to run one of the old wooden tugs with the horizontal wheel that you had to spin to go from forward to reverse. Imagine the timing as you're approaching something. … He was like the song, 'Smooth Operator.'"

You can check out video of the sail-by below: