Jane Thornthwaite apologized – again – for her remarks about Bowinn Ma at a local Liberal roast during a virtual all-candidates meeting this week in North Vancouver.
Oct 22, 2020 1:20 PM By: Jane Seyd 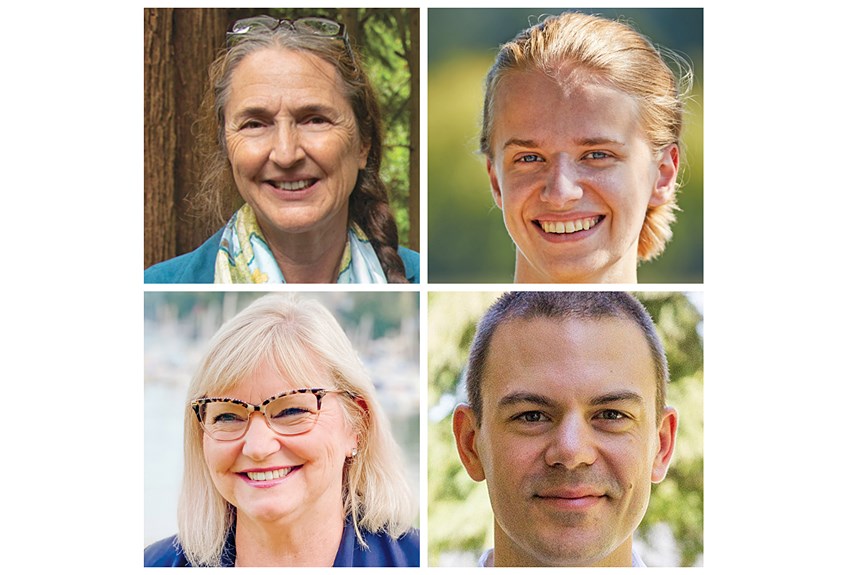 Jane Thornthwaite apologized – again – for her remarks about Bowinn Ma at a local Liberal roast during a virtual all-candidates meeting this week in North Vancouver.

Meanwhile, the Green Party’s Harrison Johnston pressed the NDP’s Susie Chant about her party’s decision to continue the Site C project and support natural gas fracking, Thornthwaite asked how the Greens are dealing with being “betrayed” by the NDP’s snap election and Johnston grilled Thornthwaite how the Liberals will fill the hole in the provincial budget that will be left by a proposed PST tax holiday.

Actual debate threatened to break out at points during the all-candidates forum for North Vancouver-Seymour candidates Tuesday hosted virtually by the Seymour, Blueridge and Deep Cove community associations in partnership with the Parkgate Society.

In addition to set questions, the format allowed candidates to grill each other on uncomfortable topics.

Among those: the government’s decision to call a snap election, promises by both the Liberals and NDP to hand more money back to voters, whether the COVID plan for schools makes sense and unintended consequences of B.C.’s state of emergency.

Whether the government is doing enough to help with the economic fallout of COVID-19 was one question addressed by candidates. Chant pointed to the NDP’s promise to give $1,000 back to households, an anticipated $400 renters rebate and a freeze on rent increases in 2021 as among measures that are helping local citizens. But Thornthwaite said the decision to call the election means a lot of the financial assistance promised to businesses can’t even start flowing until after the votes are counted.

“It basically makes it worse for small businesses and people to survive during the pandemic because of this election,” she said.

Both Thornthwaite and Johnston criticized the NDP for being much slower to sink funding into services like mental health and addiction supports than the government was to react to COVID-19.

“We’ve seen more people dying of overdoses during the pandemic than people who've actually died COVID-19. And that really just illustrates how big of an issue that is. And it's interesting to see how quickly the government funded COVID-19 and how it's been years now to see a similar sort of response to the overdose epidemic,” said Johnston.

Chant agreed there are gaps in services that need improving, but said solving mental health issues is not simple.

Thornthwaite also took the NDP to task for homelessness, saying it has gone up over 20 per cent in North Vancouver under the NDP government.

“What we’re doing right now is not working,” she said – pointing to tent cities that have sprung up in many communities.

Johnston agreed that the NDP have failed to solve the problem but said the Liberals were to blame for exacerbating the root causes of homelessness during their term in office. “They were in power for 16 years and didn’t seem to care about these issues until the NDP got in power,” he said.

That prompted a response from the Libertarian candidate Clayton Welwood who said no political party can be blamed for homelessness, saying there are deep-seated societal issues as well as people’s personal "demons" involved.

On the government’s return-to-school plan, Johnston said he’s spoken to many students who are uneasy about whether it’s safe or not. He said the government needs to listen to teachers and students and make sure funding is in place to ensure safety in the schools.

Thornthwaite said she favours the hybrid model – of part-time in-class instruction with part-time online – but said “the funding model set by the Ministry of Education doesn’t allow for it.”

“I would advocate for a revolt on that funding model to allow for hybrid options,” she said.

Chant said decisions made by the ministry are being constantly reviewed and can be changed if needed.

In terms of the economy, Thornthwaite criticized the NDP for introducing or increasing taxes and touted the Liberals’ promise for a one-year tax holiday from the provincial sales tax, saying it would stimulate spending and jump-start the economy.

Johnston questioned where the missing $7 billion to $11 billion of provincial revenue would come from. “What’s going to be cut?” he asked.

Welwood said he disagreed with clamping down on parts of the economy in the interests of COVID-19 safety and propping up business with government support. “We can’t keep going indefinitely with spending programs to support the victims of bad government policy,” he said, adding he favours an end to B.C.’s state of emergency.

Asked by Chant how she has made amends with people offended by her sexist comments about Ma, Thornthwaite said she felt bad about making them. “They were insensitive and stupid,” she said, adding she herself has two daughters.

Earlier in the forum, Thornthwaite addressed the issue directly saying she had made “inappropriate comments” and “I’ve been beating myself up ever since,” adding she has apologized to Ma.

Transportation and options for rapid transit, greenhouse gas emissions and changing the way municipalities and the conservation office deals with problem bears were other topics raised in the candidates’ forum.

The North Shore News recently asked all local candidates directly for their views on key election issues. Click here for those responses.