The last and likely the most impactful phase of the $198-million Lower Lynn Improvement project is set to begin, just as the first phase comes to a close.
Aug 25, 2020 3:22 PM By: Brent Richter 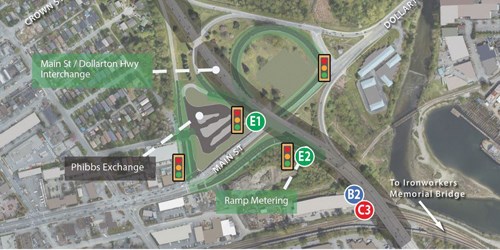 The last and likely the most impactful phase of the $198-million Lower Lynn Improvement project is set to begin, just as the first phase comes to a close.

The Ministry of Transportation and Infrastructure announced Monday that Lafarge Canada had been issued the contract to build a new overpass and on-ramps connecting Main Street/Dollarton Highway to the Ironworkers Memorial Second Narrows Crossing.

Starting in mid-September, Lafarge will begin work on a new Highway 1 overpass crossing Main Street and combining the Dollarton and Main Street on-ramps into one lane. Instead of having to merge with highway traffic, the combined on-ramps will have their own signals to safely control the number of vehicles bound for the bridge deck.

“That’s going to improve the eastbound traffic immensely. It also eliminates the highest frequency of accidents that was occurring in the Lower Lynn area,” said Jay Porter, project manager. “The modelling shows that once that’s complete, that eastbound traffic during peak time will improve by 60 per cent.”

Porter said there won’t be any road closures during construction, however, because the project requires a new retaining wall to be built for the overpass, the sidewalk on the west side of the Ironworkers bridge will be closed for about six months, meaning pedestrians and cyclists will have to share the east sidewalk. Pedestrians and cyclists on Main Street will also have to detour while pile driving is done for the new overpass.

The announcement of Phase 3 construction comes just days after the ministry announced the completion of Phase 1 of the project, the new Mountain Highway interchange. That portion of the project finished almost two years behind schedule, mostly thanks to underground utilities work complicating the project.

The new Fern Street overpass, which will connect Keith Road to Mount Seymour Parkway, should be done by the end of 2020. And in the spring of 2021, the new on-ramp connecting Mountain Highway to eastbound Highway 1 over a new bridge across Lynn Creek should be ready, Porter said.

The entire project, which was first announced in 2014, should be done by the end of next summer, Porter said.

Funding for the project is coming from the province, ($76.7 million), the federal government ($55 million), the District of North Vancouver ($57 million) and third parties ($9.2 million).

North Vancouver-Lonsdale MLA Bowinn Ma said she was grateful to see the project moving into its final days.

“Residents have been really patient through all of this and I’m really hoping that they are able to see the benefit of this with improved traffic flow and, importantly, safety improvements,” she said. “But we should make clear that this project isn’t going to solve all our transportation problems. In fact, it likely won’t be long before the extra capacity is taken up by an increase in driving.”

The key to solving congestion, Ma said, is reducing car dependency through building complete communities and working to shift commuters to more efficient modes of transportation – walking, cycling and transit.