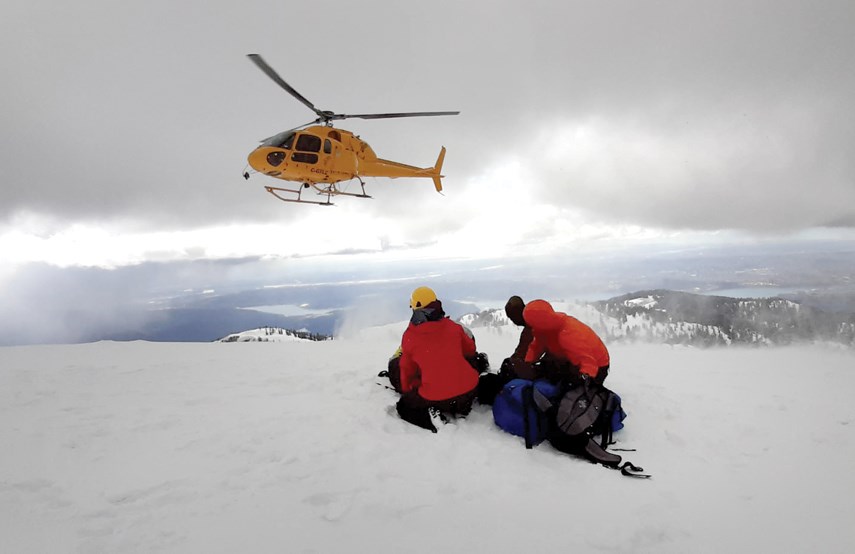 North Shore Rescue is on pace to smash that last year’s already record high volume of calls for help, even before the busy summer season arrives.

The team assisted or carried out four life-saving calls over the Easter long weekend.

On Friday afternoon, a hiker happened upon a woman having cardiac issues near Norvan Falls, deep in Lynn Headwaters Regional Park. He sprinted almost four kilometres until he was within cell coverage and called 911.

District of North Vancouver Fire and Rescue Services members and Park Rangers were already headed up the trail on foot.

“We got a helicopter up right away, and we got a physician and we basically met at Norvan Falls at the same time. It worked out really well,” Danks said.  “I don't know that people on the North Shore recognize how well the emergency responders all integrate, but that was a really neat thing to see and it definitely it saved a life in this circumstance.”

Before they had stood down, another call came in for a man who became separated from his family near Rice Lake. NSR members quickly arrived via e-bikes and found the man.

Saturday, blessedly, the emergency pagers did not buzz once, Danks said.

Just before 11:30 a.m. on Sunday, however, the team was called out to the first pump of Mount Seymour after a report a backcountry skier had fallen into a two-metre-deep pit.

“She had a decreased level of consciousness and wasn't responding to instructions from her husband or the friends who were there with her, which was pretty indicative of a head injury,” Danks said.

With an ER physician onboard, a Talon Helicopter was able to reach the site through a hole in the clouds and medivac the patient to a waiting ambulance at the Bone Creek SAR station, Danks said.

At first, rescuers were baffled as to why someone would dig out a pit like that in the backcountry. Their best guess was that it was leftover from someone teaching an avalanche safety course, although those groups tend to clean up after themselves, Danks added.

Some online gumshoeing by search manager Doug Pope however, revealed the pit was left by backcountry campers, who he was able to track down.

“They were incredibly sorry. They said they learned their lesson and were really embarrassed about what happened, and they were genuinely concerned for the woman,” Danks said.

Just as they were wrapping the call, West Vancouver Fire and Rescue called for assistance in helping two skiers out of a creek gully on Hollyburn Mountain. Danks said the team called on Cypress Mountain ski patrol to help get the couple out.

The trend is partly driven by the pandemic sending more people into the mountains for recreation, but they still happen by people who are “totally naive to best practices,” he said.

“It just comes down to preparation, wearing the right equipment, doing the research on the hike you're doing.”

Shoulder season tends to add to the risk as people can easily get caught off guard about the amount of snow and ice they’ll find in the mountains, Danks said.

“Conditions are changing. Snow bridges that were stable a few weeks ago are starting to melt out drastically from underneath, so people need to be very aware of that. And they also need to be prepared for winter conditions still, even though you're in shorts and a T-shirt in town,” he said.