Volunteers counted 100 people “living rough” on the North Shore in this year’s Metro Vancouver homeless count but in actuality, you’d have to septuple that number to find the real homeless population.
Sep 28, 2017 7:00 PM By: Brent Richter 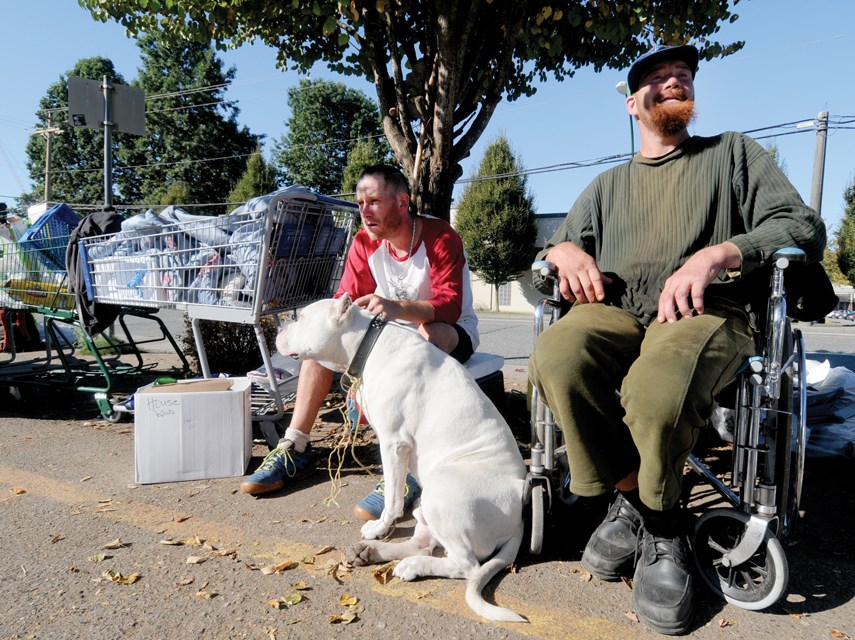 Volunteers counted 100 people “living rough” on the North Shore in this year’s Metro Vancouver homeless count but in actuality, you’d have to septuple that number to find the real homeless population.

The North Shore Homelessness Task Force published a report this week finding 736 unique individuals registered for services reserved for the homeless on the North Shore over the course of 2016. The study found another 295 individuals who were at imminent risk homelessness.

“We don’t believe that homelessness is going down on the North Shore. All of us service providers on the ground are seeing more people, not less,” said Leya Eguchi, the report’s author. “That kind of alarmed us. That’s not our reality.”

In fact, 736 is probably a conservative estimate as it doesn’t include anyone who registered for services in previous years but are still living here without proper housing.

Eguchi said she was particularly disturbed to see 37 children under 18 included in the task force study. And slightly over half of the women at risk of homelessness reported being victims of domestic violence.

Phil Hopkins, 40, is among those who just recently became homeless. He’s been sleeping outside for the last four months since he was laid off from his $24-an-hour job building doors.

“I may not look like it, I may not dress like it but I am homeless,” he said outside the bottle depot on Brooksbank Avenue.

Looking for a new apartment or shared accommodations has been stressful, Hopkins said. Even if you can find a place within your budget, it’s impossible to come up with first and last month’s rent plus a security deposit while taking care of other bills and keeping yourself fed, he said.

“It’s going to get cold out here pretty quick, so I’m going to have to figure something out,” he said.

But Hopkins, like many people without a place to stay, said he won’t go to the Lookout Society’s North Shore shelter.

“Why would you want to go somewhere you don’t like? I can dress warmer than that. I can find food. I’ll survive.”

Hank Brennan has also noticed things changing for the worse. For almost a decade, the founder of Hank’s Christmas Glitter has been collecting thousands of bottles and cans a month, which he returns for refunds. He spends upwards of $24,000 a year on gift cards, which he distributes to people in need from his minivan, decked out in Christmas decor.

“Since I started this nine years ago, it’s probably doubled from what I can see,” he said noting there are more and more new faces all the time.

The common theme in the stories he gets from the people he meets: the high cost of housing.

The lack of affordable housing is not news to “Big Al” Mattson, who has been in and out of housing for the last 17 years.  It’s been six and a half years since he last had an apartment. His roommate split in the middle of the night and he couldn’t afford to keep the place on his own.

“I got myself a tent and lived in there. Ever since, I’ve been living wherever I can,” he said.

Mattson now requires a wheelchair to get around and is unable to work. Many of the people bedding down each night in the bush or under bridges are totally reliant on the $706 a month they get in social assistance and disability payments, he added.

“We’re homeless but we’re not a bunch of bums,” he said.

The newly elected NDP government in Victoria recently upped the amount people on social assistance and disability but a lot more needs to be done, Eguchi said,

“I would challenge anyone on the North Shore to be able to live $706 a month to pay for rent and food and transportation and whatever else. It’s still really tough,” she said.

Eguchi said the report is intended to spark action from all three levels of government who may have been under the false impression that homelessness is more of a downtown problem.

“Right now there’s more interest federally and provincially in building more social and affordable housing. And historically, the North Shore has not been seen as a priority. There’s this impression that we’re more affluent and therefore don’t need as many social resources,” she said. “We don’t want to be overshadowed and bypassed.”

The same message should be heard by the municipalities, which can put up land for affordable housing, or incent developers to build more through density bonusing, Eguchi said.

“With political will, this is a solvable problem,” she said.