The amount of time it takes towing crews to clear stalled and crashed vehicles from the two North Shore bridges is dropping.
Feb 14, 2020 6:00 AM By: Brent Richter 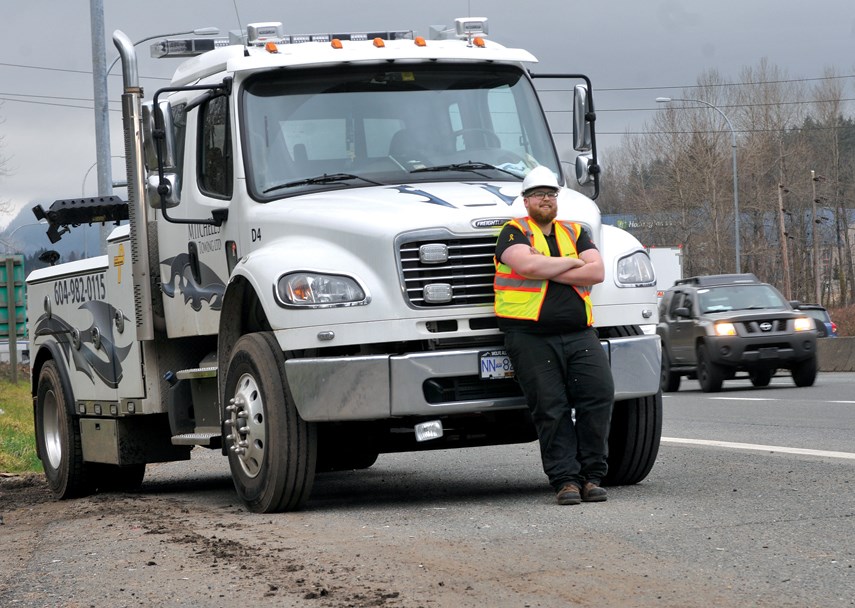 The amount of time it takes towing crews to clear stalled and crashed vehicles from the two North Shore bridges is dropping.

According to DriveBC stats, incidents between Lynn Valley Road and the Cassiar tunnel took just over 29 minutes to clear in 2018-2019, on average, 11 minutes faster than in the previous 12 months.

In November 2018, Miller Capilano Highway Services took over the Ministry of Transportation and Infrastructure’s new towing and maintenance contractor for the Howe Sound corridor, which includes the Lions Gate Bridge and Ironworkers Memorial Second Narrows Crossing. The new contract requires a higher level of readiness, with more trucks on standby, including at least one flatbed and one heavy wrecker.

Of the 195 incidents on the Ironworkers corridor reported to DriveBC between Nov. 1, 2018 and Oct. 31, 2019, 68 per cent occurred during the hours the new contract specified must have more trucks on standby.

On the Lions Gate Bridge and Stanley Park Causeway, it took crews just under 46 minutes to clear major incidents and 37.5 to clear minor ones in the last year of the old contract, DriveBC’s data shows. Since Miller Capilano took over, those numbers have fallen to 41 minutes and 26.4 minutes, respectively.

“There was a bit of a learning curve at the beginning but now, a year and a half in, we’re very happy with how things are proceeding,” said Steve Drummond, vice-president of Miller Capilano.

Bowinn Ma, NDP MLA for North Vancouver-Lonsdale, requested the data because expedited crash clearing was one of the action items in the Integrated North Shore Transportation Planning Project, which she led in 2018.

“When an incident occurs during peak hours, every minute counts because a stalled truck holding up a lane for even a few minutes can impact traffic for hours afterwards,” Ma said. “The big picture takeaway is that the change in maintenance and towing contract has been producing results for people on the North Shore.”

“It’s huge when you’re seeing volumes of over 60,000 vehicles a day, which equates to 2,000 to 3,000 vehicles an hour. By having an additional 11 minutes or even greater, it’s a huge, huge relief to traffic flow on the bridges, tunnels and throughout everywhere on the North Shore just because we are so restricted with these two crossings,” he said.

There are caveats to the data though, Ma warned. What constitutes a major or minor incident is subject to the interpretation of the staffer who logs it. Factors considered include the time of day, number of lanes that are blocked, types of vehicles involved, and whether or not there are injuries. Minor incidents outside of rush hour likely don’t show up in the logs at all.

If emergency responders are required to attend, the maintenance contract is no longer the prevailing factor in how fast the scene is cleared.

Mitchell Martin, owner of Mitchell’s Towing, which is now a subcontractor of Miller Capilano, said his own towing logs show stalls and crashes are being cleared even faster than DriveBC’s data suggests.

“I would be very hard pressed to say that we are in that situation [where a crash]isn’t being cleared in under 20 minutes,” he said.

In March last year, the province changed the rule requiring police to file reports on every crash that causes more than $1,000 in damage before the wrecks can be moved. The threshold for a mandatory police report now is $10,000.

More recently, the province has made it clear to police agencies and companies with commercial fleets that they cannot wait for their preferred tow company to arrive and must use the first available truck, at least to get them off the bridge, Ma said.

Although the cost of the towing contract fluctuates annually related to weather and infrastructure changes, taxpayers are actually paying less for the higher level of service. The first full year of the new contract came in at $9.9 million, compared to $10.5 million the year before.