He’s been to Delta, Sudan, Iraq and even Burnaby. But for Supt. Ghalib Bhayani, North Vancouver is the promised land. “I’ve been trying to get to North Van for 18 years, my entire RCMP career,” said the force’s new officer in charge.
Sep 25, 2019 6:00 AM By: Brent Richter 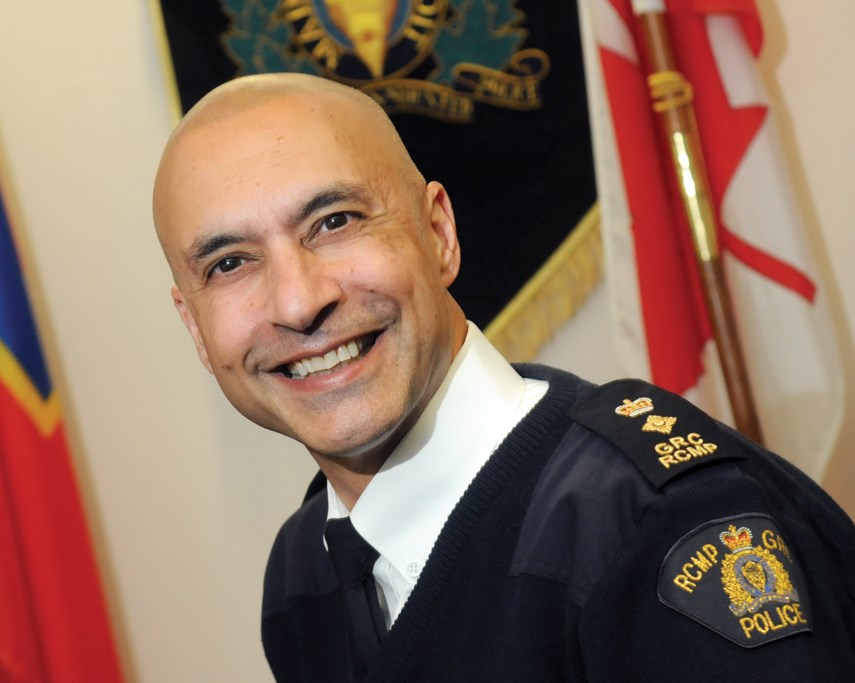 He’s been to Delta, Sudan, Iraq and even Burnaby. But for Supt. Ghalib Bhayani, North Vancouver is the promised land.

“I’ve been trying to get to North Van for 18 years, my entire RCMP career,” said the force’s new officer in charge. “This detachment is considered a gem. Simply put, a gem.”

Bhayani took over the top post in July after former detachment commander Chris Kennedy stepped down.

Like a lot of Ismaili Muslims in Canada, Bhayani and his family fled Uganda to escape persecution from the Idi Amin dictatorship in the early ’70s. He spent his youth in Toronto before his family moved to Surrey, where he went to high school.

After getting a criminology degree at Simon Fraser University, Bhayani spent the first 10 years of his career with the Delta Police Department.

In 2002, Bhayani made the switch to the RCMP, where he’s served with Richmond RCMP’s airport unit, the Combined Forces Special Enforcement unit working in surveillance, as a watch commander in Burnaby and inspector in charge of community services in Surrey.

In 2016, he wanted to put his master’s degree in international diplomacy to work and took a posting as the first-ever Canadian advisor to Iraq’s minister in charge of policing.

“Being Muslim, they were looking for someone who could navigate the complexity of Iraq. After Daesh, or ISIS, had destroyed a number of police stations and killed police officers, I was there to help them in rebuilding their policing structure and introduced community-based policing principles to the Iraqi police,” he said.

Bhayani said it was the most difficult posting of his life, but also the most rewarding. Every day, he’d have to suit up in heavy body armour – about four times as thick as what officers on patrol in North Van wear today – and go through intelligence briefings before he could be escorted by military police through the “red zone” to work.

“It was very dangerous. Drones were dropping bombs on different parts of the city every night. ISIS was doing everything they could to disrupt what we, the coalition, were trying to do there,” he said.

Apart from offering a peaceful contribution to rebuilding Iraq, Bhayani said the experience allowed him to build relationships with allies, which is a big part of his philosophy. Much of his first eight weeks on the job has been spent having sit-downs with the RCMP’s allies – first responder and health-care agencies and community leaders like North Shore Rescue, the two North Van fire departments, the HOpe Centre and Lions Gate Hospital, non-profits, MLAs and MPs.

Bhayani sees them as all part of network of people who have to come together in the name of community safety. Less than half of police work is investigating and arresting people, and Bhayani is passionate in using their resources as a means to prevent crime. In 2017, he was published in an academic journal on the subject of how early interventions for at-risk youth can reduce criminal behaviour later in life.

“The literature is clear. One dollar spent in prevention upstream is six to eleven dollars saved downstream,” he said. “How will the community know that the new chief is here? They will see things here that speak to these types of issues. Not just ‘lock them up.’ That’s not my philosophy. That’s not the direction I want to move towards.”

Bhayani said he plans to focus more outreach to vulnerable populations including people living homeless or with substance abuse, youth and seniors. You can also expect to see more foot and bicycle patrols in the future as Bhayani is a big believer in officers getting some facetime with their community.

Among the problems Bhayani has already been told are community priorities: Property crime (especially bike theft), and public safety fears at our transit hubs. Anecdotally, Phibbs Exchange is one of the worst spots, Bhayani said, but anecdotes don’t drive his decisions.

“Everything I will do here will all be based on metrics. I don’t believe in a gut feeling. ‘We need more cops or we need to move our resources to this neighbourhood.’ For me, it’s metrics. It’s data. It’s evidence-driven.”

More than a cop, Bhayani is also an academic. He wrote his PhD thesis for London Metropolitan University on police accountability, stemming from Robert Dziekanski’s death at Vancouver International Airport. One of the recommendations from his thesis was to establish civilian oversight of police in B.C., which the province later did with the Independent Investigations Office.

Also on his to-do list is ensuring his members have access to the mental health help they need to navigate such a high-stress job.

Although he commutes from East Vancouver, Bhayani and his family have been regulars on the North Shore on weekends, for years.

“This community has done so much for me and my family, now it’s time for me to come back and say, ‘What can I do for you?’”