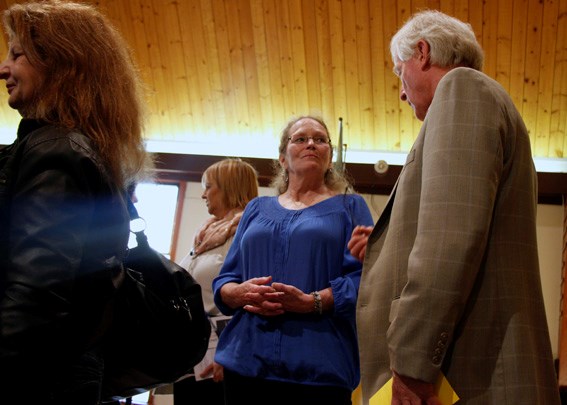 After Deborah Sexton was evicted last year, the North Shore resident and her dog spent the winter living out of her car.

The North Shore’s lack of affordable housing left her with no other option, she says. But a recent assembly on affordable housing comprising North Shore mayors and representatives from labour, community and faith-based institutions is working to ensure people like Sexton are not left behind in Vancouver’s over-the-top housing market.

Sexton, who was rent-evicted last September and shared her story at Monday’s assembly, has struggled to find affordable housing on the North Shore ever since. In December, she found a short-term solution at a discounted motel in Vancouver, a space she shared with incoming refugees from Syria.

The assembly was organized by the non-partisan Metro Vancouver Alliance, a collection of unions, churches and community organizations that work together towards common goals, including affordable housing. Despite the event occurring on a sunny Family Day Monday, the pews were filled to capacity at St. Catherine’s Anglican Church in Edgemont Village for the assembly.

City of North Vancouver Mayor Darrell Mussatto said the municipality would lend its support in working with the alliance to achieve housing affordability. “If it’s good enough for you to work in our community, it should be good enough for you to live in our community. You should have that opportunity,” he said, citing the high number of people that work on the North Shore but do not live in the community.

Mussatto said the city’s progress with legalized secondary suites in duplexes was one way the city had attempted to deal with the affordable housing issue.

“I’m hoping the provincial government comes out and shows some proper leadership because I’m not hearing it,” he said. “We need to have all the governments come together.”

Craig Cameron, acting mayor for West Vancouver, said the municipality had to work to get people to care about the issue. “There’s the moral issue of caring for your fellow man or woman,” he said. “There’s the second issue: What about older people who have been in the community their whole life? Do you really want to send them somewhere else to live?”

Cameron also talked about a recent emergency response simulation in West Vancouver that demonstrated why educating the community about housing affordability was important.

“One of the things that came out of that was that 70 or 80 per cent of (emergency response) staff live off the North Shore. All our police or firemen wouldn’t be there if we needed them in an emergency,” he said.

District of North Vancouver Mayor Richard Walton cited a recent council decision to draw up a list of district-owned land that could be suitable for non-market housing as proof the municipality was actively involved in seeking affordable housing solutions.

After the event, Michael Markwick, an instructor at Capilano University and co-host of the assembly, said the alliance would be following-up with the municipalities in roughly 45 days to see if they’d made progress.

“We’re not in the business of getting pats on the head and being told to go to bed,” he said. “We instead will be following up with them because this is a collaborative agreement. It’s not ‘Will you do this for us?’ It’s ‘Will you do this with us?’”